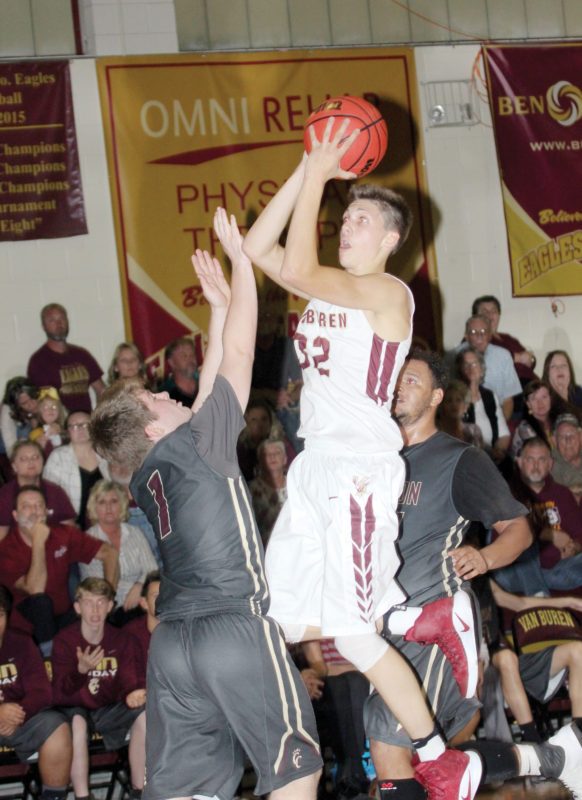 Bo Walker goes up for a shot earlier in the season. (Photo by ANDY SOUTHARD)

Both Van Buren High School teams played against Alcoa High School, on Monday afternoon, and both teams almost came away with the victory.

In the girls’ game, the Eaglettes lost to the Lady Tornadoes 39-32. In the boys’ game, the score was tied with 2 minutes left to go in the game, but the Alcoa Tornadoes were able to take the lead and secure the victory 61 to 56.

In the first game, the Lady Tornadoes outscored the Eaglettes 11-10 in the first quarter.

Mallory Christian led the Eaglettes in scoring with 9 points. Kinzie Johnson added 8 points, and Tilly Dodson and Hannah Sullivan each chipped in 7 points apiece. Lindsey Riggs finished out the scoring with 1 point.

In the boy’s game, the Eagles got down early, but battled their way back by outscoring their opponents in the 2nd and 3rd and tied the game with 2 minutes to go in the fourth but ultimately ran out of time.

In the first quarter, the Tornadoes outscored the Eagles 25-14.

In the second quarter, the Eagles battled back and outscored the Tornadoes 20 to 16 thanks to Caden Mills and Bo Walker, who had 13 of their team’s 20 points. The Eagles were only down 41-34 heading into the second half.

In the third quarter, the Eagles picked up their defense and held the Alcoa Tornadoes to 5 points and scored 11 points themselves. At the end of three quarters of play, the Eagles were down by one with the score being 46-45.