“It’s that time again when we put out our JESUS MESSIAH sign on our lawn, which is lit up at night for all to see who pass by our home.” J.T. and Rae Rae

These businesses each have hosted or sponsored food drives to bring in donations of food for needy dogs and cats or assist seniors with their pet food requirements. These businesses are: Brandon Malone Photography and White County Farmers Co-op. FWCA presented these businesses the “Pawsitive Award” for their help in assisting our group promote animal welfare.

FWCA wanted to recognize three individuals who have gone out of their way to help animals this year. These three people were presented the … CONTINUED

A Christmas to Remember

She was born Aug. 24, 1956, in Altamont, Tennessee, to John Luther Baker and Jessie Mae Brady Baker.

She was a member of Stevens Street Baptist Church and the Ladies Friendship Sunday School Class. She was employed at Wilson’s Sporting Goods for several years. After her children were born, she was a homemaker and worked at Christine’s Hallmark and Noah’s Ark Day Care.

She is survived by her husband of 56 years, Herbert Mitchel Mills (whom she married April 10, 1959); two      daughters and one son-in-law, Jennifer Eberhart, of Bowling Green, Kentucky, Julie and Chris … CONTINUED

Saint Thomas Highlands Hospital made a donation to Alzheimer’s Tennessee in the amount of $3800.84 to help Tennessee patients and families in the areas of education, support, and research.

“Not only did we exceed our goal of $2,500, we almost doubled it,” stated St. Thomas Highlands CEO Bill Little. “There isn’t a person in here that isn’t touched by Alzheimer’s in some way. It’s real and we’re helping everyday with services that help ease the challenge they have in every day life.”

Alzheimer’s Tennessee has the main goal of living in a day without Alzheimer’s. For now, every penny raised goes to helped research, education, and keeping patients … CONTINUED

During the previous meeting of the White County School Board of Education, plans for the White County High School Career Academy, previously Sparta Crossings were released in a PowerPoint presentation by Red Chair Architects.

Jarrod Arellano, an architect working on this project, informed the members of the school board that as of Dec. 10, construction documents were 50 percent complete.

Arellano expects the plans to be complete before Jan. 4 and will review bids after a two week bid process. “This is the last drawing before we get it on the street for bidding,” stated Arellano.

By limiting the bid process to two weeks, an additional two weeks … CONTINUED

Residents get swabbed to possibly be the match

The Drive for Jenna, a 26-year-old woman who is fighting a rare cancer, is underway at the Sparta-White County Rescue Squad building, with residents getting swabbed to join the bone marrow registry. Not only have individuals stopped by for the quick and painless procedure, but local factories have asked that boxes of swab collection materials be brought in so they can join the registry, as well. 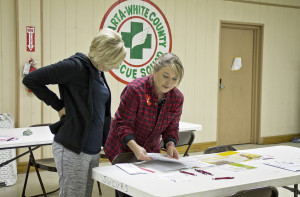 Karen Alexander gives Lori Sparks, of Doyle, a quick training in collecting the information and swabs.

White County High School students who attended The Happening this year chose a special mission project – making blankets for babies and children. These blankets are for foster children who are taken from meth homes. This year’s Happening marked the 18th anniversary of students gathering for a night of fun, food and fellowship. More than 520 WCHS students attended the 2015 event.

​Every year, Turney Financial Group LLC hosts a Christmas Party for their clients. It is because of their generosity that the company has become one of the largest annual donors for toy drives for children in the Upper Cumberland.