It had been three months since the Doyle Board of Mayor and Aldermen had a quorum and was able to hold a meeting.

During its Oct. 4, 2016, meeting, however, the board wasted no time getting back to business, implementing building codes and appointing a new alderman, in an effort to make improvements in the town.

The meeting began with Upper Cumberland Development District’s Tammy O’Dell addressing the board on the status of two grants that the town had been awarded.

The first grant was $315,000 that was awarded to Doyle Volunteer Fire Department for a new fire truck and equipment, which requires a 5 percent match by … CONTINUED

Little Free Pantries serve those who are experiencing difficult times 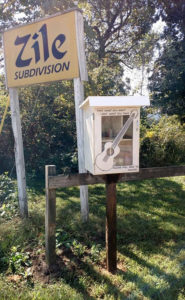 A Little Free Pantry has been set up in one of White County’s rural subdivisions, with more to be placed at various locations.

Many people will experience moments of financial hardship in their lifetimes. Some might be very temporary-caused by an unexpected and expensive car repair. Others might last longer, perhaps due to an injury, build up of medical bills due to the illness of a spouse or child, or loss of employment.

In those moments of struggle, having a little bit of relief by way of receiving some essential necessities-such as food or personal care items-could be a big help for a family.

This was the idea … CONTINUED

Liberty Square: A Lester Flatt Celebration is an internationally award-winning music festival, so it is only fitting that the performers this year are award winners themselves.

The lineup for the event, slated for Oct. 8, includes Breaking Grass, Blake Williams and Friends, Kenny and Amanda Smith and Lonesome River Band.

Headlining is Lonesome River Band, whose lead singer, Sammy Shelor, is a 2011 recipient of the prestigious Steve Martin Prize for Excellence in Banjo and Bluegrass. Only one performer is selected to receive this award per year.

He was an honorably discharged veteran of the U.S. Army. He retired from Terry Pool Company.

Survivors include his sisters, Lucy Brundage, Louise Liford; brothers, Carl B. Terry, Robert Terry; and many nieces and nephews.

Hunter Funeral Home is in charge

He was a machine operator at JELD-WEN, until 2008.

He was preceded in death by his parents and a son, Mark Shane McCausland.

Wanda Jean Randolph, 83, former owner of Cookeville Kountry Kitchen, passed away at her home, on Oct. 2, 2016.

She met the love of her life, W.C. (Dub, Papa) Randolph, with whom she had celebrated 68 years of marriage.

Mrs. Randolph was a loving wife, mother, grandmother and great-grandmother who enjoyed gardening at her farmhouse and creating quilts for her family to share around the holidays.

She was preceded in death by her parents, Orville and Elizabeth Cronk; her brothers, Royce Cronk, Donald Cronk, both of whom had resided in Michigan, … CONTINUED

The White County High School soccer team wrapped up the regular season with a 3-2 win over York Institute.  They will travel to Rhea County Saturday for a 6 p.m. District 6AAA tournament quarterfinal match-up.

The White County Middle School football team ended their season with a 56-6 loss at Warren County.

See Thursday’s print edition for the details of both games.

Steve Anthony Cothran died at his home on Monday, Oct. 3, 2016 from an extended illness.

A genius designer and talented musician, his favorite pastimes were playing his guitar, making people laugh and helping others. Steve founded Lab23 Controls, in 1989. Applying his ingenuity and electronics expertise in the manufacturing industry, his custom designed controls made the lives of line workers easier and kept them safer.

Steve had a true giving nature and gave of himself in every capacity to friends and strangers alike. Over the years he helped many families who were down on their luck. He loved his family, especially his newest member, a great-nephew, Will … CONTINUED

She was born Sept. 22, 1927, in Celina, to Edward Luther Monroe and Willette Beatrice Goodpasture Monroe.

She was preceded in death by her parents; her husband of 61 years, Leechy Cleveland “L. C.” Buttrey Jr.; and brother, John Robert Monroe.

Survivors include two sons and daughters-in-law, James and Neva Buttrey, Robert Lynn and Debbie Buttrey, all of Murfreesboro; one daughter and son-in-law, Linda and David Templeton, of Sparta; grandchildren, Sherry Buttrey, of Nashville, Jonathon Buttrey, of Murfreesboro, Emily and Chester Di Bari, of Washington D.C., Leslie and Tanisha Templeton Jr., of Sparta, Regina and Wesley Martin, of … CONTINUED

Cookeville one of the scheduled stops

On Oct. 3, Tennessee Gov. Bill Haslam and Economic and Community Development Commissioner Randy Boyd kicked off Manufacturing Week, a ­celebration of Tennessee’s manufacturers aimed at encouraging students to pursue careers in the growing manufacturing industry in Tennessee. The Brookings Institution recently ranked Tennessee No. 1 in the U.S. for advanced industry job growth.

Over the next week, Gov. Haslam and Commissioner Boyd will visit manufacturing plants across Tennessee and meet with high school, middle school and community college students.

“Manufacturing has long been a hallmark of Tennessee’s economy,” Haslam said. “Manufacturing Week is about encouraging young Tennesseans to seriously consider getting … CONTINUED