One World, a student club at Tennessee Tech, will host its biannual Multicultural Evening at 6 p.m. Thursday, March 2 in the Tech Pride Room.

One World is a club dedicated to promoting diversity on campus and in the Cookeville community. The group also strives to educate others about different cultures and foster unity.

Guest speaker for the event will be Hector Neil Black, a prominent Civil Rights leader. Following his daughter’s murder in 2000, Black and his wife worked to save the life of her murderer, fueling Black’s anti-death penalty and peace activism.

Black will speak about his experiences with diversity, race relations at Harvard University, his … CONTINUED

Power Athletics Black Cats Senior Coed Level 4 D2 won their division to become the National Champions. The two-day competition averages the scores for each day and awards the highest team the National Champion Honor. They then received the winning medals and a national champion jacket. The Black Cats are made up of young men and women from White, Putnam, DeKalb and Warren counties.

Madison Mahan, an eighth grade student at White County Middle School, is a member of this team. After returning home Monday evening, the team found out their efforts from the weekend … CONTINUED

Logan Swoape (center, right), of Sparta, attended the University of Tennessee at Martin’s Junior/Senior Day on Feb. 20. This event allows prospective students to meet with professors and students in their chosen major, experience college life inside the classroom and tour the UT Martin campus. Swoape, a senior at White County High School, is pictured with family members (l-r) Ethan, Tonya and Scott Swoape. For more information about UT Martin or to schedule a campus tour, visit utm.edu/advantage.

According to White County resident Chris Sapp, at approximately 7:30 a.m., Feb. 22, 2017, a westerly bound minivan reportedly slid off Turntable Road and overturned in a single-car accident. No further details are available at this time.

Joyce Maxine Clark, 79, of Kettering, Ohio, formerly of Sparta, passed away Feb. 18, 2017, at Hospice of Dayton, surrounded by family.

She was a retired secretary from General Motors and Fall Detective Bureau. 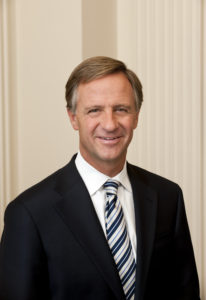 Tennessee Governor Bill Haslam will be conducting a Town Hall on Thursday, Feb. 23, 2:15 pm. The community forum will be held in the multi-purpose room at Trinity Assembly, 205 W. Wall St, Algood. Governor Haslam is expected to talk about the proposed IMPROVE Act, the Town Hall is open to the public.

UPDATE: Scene has been cleared and Monterey Highway has been reopened.

On Feb. 22 at approximately 10:11 am, White County E-911 received an emergency call about a head on collision on Monterey Highway, roughly two miles north of Hwy 84 Market. Emergency personnel are on the scene with the White County EMS, Cherry Creek Volunteer Fire Department, members of the Sparta/White County Rescue Squad, White County Sheriff Department, as well as the Tennessee Highway Patrol. White County EMS is attending to several injuries with those involved in this accident. Traffic is blocked in both directions, due to the accident involving a minivan and a Ford Taurus.

Who: United Daughters of the Confederacy, Captain Sally Tompkins 2123

Tennessee sportsmen and non-residents, who work as hunting and fishing guides in the state, will now have to complete an application for their licenses beginning with the 2017-18 license year.

Resident and non-resident guide licenses will only be available by application effective Feb. 18, 2017, according to the Tennessee Wildlife Resources Agency.

She was a loving wife, mother and grandmother.

Mrs. Holt was a teacher with the Knoxville and Knox County schools for 36 years. She was an avid gardener, seamstress and quilter. Mrs. Holt could be seen in all weather working in her flowers and garden and helping her husband on the farm.

She was an active member of Rutherford Memorial United Methodist Church where she worked closely with the Corryton Food Pantry and in her community.

She loved being with family … CONTINUED