Krystal is returning to Sparta 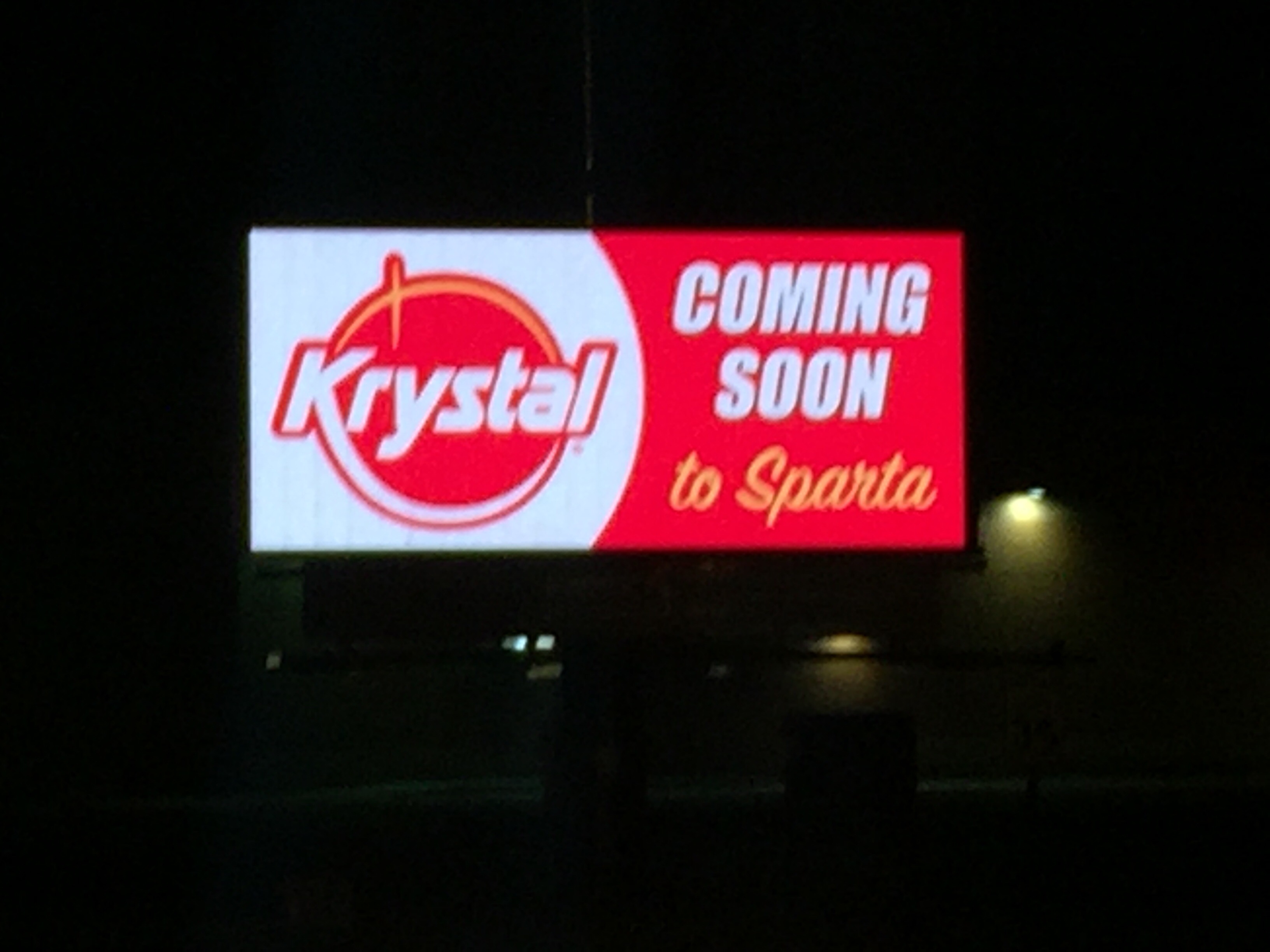 A new billboard ad announcing the return of a former restaurant to Sparta is causing some excitement within the community.

Krystal’s use to have a location on Bockman Way that closed in 2012.

The Expositor hasn’t confirmed with the Krystal Company about this announcement. The location and when the restaurant will open has also not yet been confirmed.

Follow SpartaLive for further details regarding the return of a Krystal restaurant in Sparta.

This will be the first time the Warriors and the Spartans have ever faced-off on the gridiron. Summit, who started its football program in 2011, had a rough go the first few years. The Spartans went 4 and 26 in the first three years. But since Brian Coleman took over the Spartans, the team has gone 12-12 over the past two seasons.

The Spartans finished last year with a 7-4 record and lost in the first round of the playoffs to Cane Ridge 35-21. This … CONTINUED

The Warrior Youth Football teams faced off against the Overton Outlaws, on Aug. 26, 2017. Once again, all three age divisions walked away with wins on their home turf. The teams will be traveling the next couple of weeks and will head to Upperman, on Sept. 2.

The Peewee Warriors lost the coin toss, and the Outlaws deferred until the second half. Griffin Adams came out strong with a touchdown on the first play of the game, but it was called back due to a penalty on the play. The Warriors’ Hudson Dodd gained a few yards and put Adams back in position to score. The extra point … CONTINUED

Progress continues to be made at Van Buren’s first county-owned park as the project continues moving forward.

Construction crews are continuing to make progress in the construction of Van Buren County’s first county-owned park. Construction continues on the new amphitheater, and concrete has been poured for the new light poles going around the park.

The new park is being constructed in the historic Burritt College campus area. Van Buren’s newest park will feature walking trails, gazebos, an amphitheater, and, eventually, an information center.

This project is being made possible by several grants received by Van Buren County, including a $900,000 state grant. Additionally, in 2016, Van Buren County … CONTINUED

Privatization of state parks to be left for next governor

The attempt to outsource management of Fall Creek Falls State Park, along with other state parks, has officially been tabled by Haslam. Privatization of state parks, which has become a volatile issue, will be left for consideration by Tennessee’s next governor.

Tennessee Department of Environment and Conservation Commissioner Bob Martineau recently made an announcement before the state legislative study committee. The committee is reviewing the Haslam administration’s outsourcing efforts across state government.

The legislative review has been created because of the governor’s administration’s efforts to outsource Fall Creek Falls State Park, located in … CONTINUED

The Tennessee Department of Transportation and Jones Bros. Inc. are racing to the finish line for the Highway 111 widening project but misses their deadline.

As construction crews continue to work around the clock, the projected completion date of widening Highway 111 is today. Even though project officials stated they would meet their deadline, it appears construction will continue on.

According to the Tennessee Department of Transportation spokesperson, Jennifer Flynn, of Region Two, the multi-lane widening project was on schedule up until two weeks ago. As previously reported, TDOT anticipated this project to be completed by the end of August.

The lane expansion project was commissioned by TDOT … CONTINUED

The awesomeness of God – seen in the solar ‘clipse

“Nahnee! Did you dit to see da ‘clipse?”

Katie Grace’s voice was filled with excitement, but Sammie thought she detected a shadowy tone as well.

“Yes, I did Katie Grace! Did you get to see the eclipse?

“No.” Now the disappointment in K.G.’s phone conversation was unmistakable. “I hadda take a nap so I didn’t dit to see it.”

Almost 4-year-old K.G. had no idea what she had missed, but all the hype about the Aug. 21 solar eclipse had built her up for a big let-down. Whatever a “’clipse” is, she knew she had slept through it!

So, did YOU dit … CONTINUED

Language of Liberty – By Debbie D’Souza, for Prager University

Once there was a South American country with a promising future. It had a functioning democracy, a rapidly developing economy, and a growing middle class. All the important indicators, including education, health care, and foreign investment, were pointed in the right direction.

It was far from perfect, but the mood was hopeful – and with good reason.

But now all that promise is gone. The country is a failed state, a hollowed-out shell of its former self.

Services like power and water are sporadic. The most basic consumer goods, from bread to toilet paper, are in chronically short … CONTINUED

The bright lights of the midway, the smells of food, and the plentiful exhibits will be back once again this weekend for the White County Fair.

Established in 1855, the White County Agricultural Fair, which is set for Sept. 1-9, has been bringing together families, friends, business owners, and rural and urban communities within White County for memory making fun.

This year’s theme for the White County Fair is “Put on Your Fair Face.” “Selfie” stations will be located around the fairgrounds as a way to capture a person’s “fair face” and create new memories at the White County Fair. Participants are encouraged to share their photos on … CONTINUED

More than $1 million was garnered during the Aug. 26 auction of the seized assets from Gentry Bros. Tractor Supply and Gentry Auto that was held by the U.S. Marshals Service in an effort to recoup losses incurred by the victims of a Ponzi scheme.

Hundreds of potential buyers filled the lot of the former Gentry Bros. Tractor Supply, on Millers Point Road, in Sparta, and countless vehicles were parked along Highway   111 near the entrance to the former business.

The U.S. Marshals Service held a live auction to sell tractors, trucks, trailers, farm equipment, and tools in the liquidation of assets seized from Jeffery Gentry. The auction … CONTINUED

Chamber of Commerce discusses creating a mural for the community

The development of a mural for the community was one of the main items discussed during the recent meeting of Sparta-White County Chamber of Commerce Board of Directors.

As previously discussed during the July Chamber meeting, the board of directors is working on plans to create a mural that will be placed in Sparta. The idea behind developing a mural is to highlight characteristics, symbols, and trademarks of Sparta and White County. This new mural would create a photo-taking opportunity for locals and visitors alike.

The board previously agreed to develop ideas and to continue the discussions. During the Aug. 22 meeting, several ideas and locations were discussed, … CONTINUED