(2) The WCHS drumline brought in the WCHS football team on Friday night before the game.

(3) The band plays the National Anthem while the JROTC presents the flags prior to kick-off.

(4) The Warrior offense huddles up around the coaches during Friday’s season opener.

(5) The WCHS cheerleaders get ready to support the Warriors in the first game of the season.

(6) The WCHS marching band played music about America during its halftime performance.

(7) The Warriors stand and salute the alma … CONTINUED

On the boys’ side, Blake Gongaware had the low score for the boys with a 76. Tanner Bryant shot an 80. Tyson Welch finished with a 90, and Jarrett Lee Glass shot a 97 to round out the boys’ side of play. Trey Crockett, T.J. Warner, and Tristian Roberts also played for the Warriors. Crockett shot a 108, Warner finished with a 108, … CONTINUED

The Warriorette Volleyball team got their 6AAA district season started, on Thursday, when they took on district powerhouse Cookeville. The Warriorettes fell to Cookeville 3-1 but played the 6AAA front-runner tight.

In the second set, Cookeville would jump out to an early 14-9 lead, … CONTINUED

Warriors shut out by Wildcats in season opener 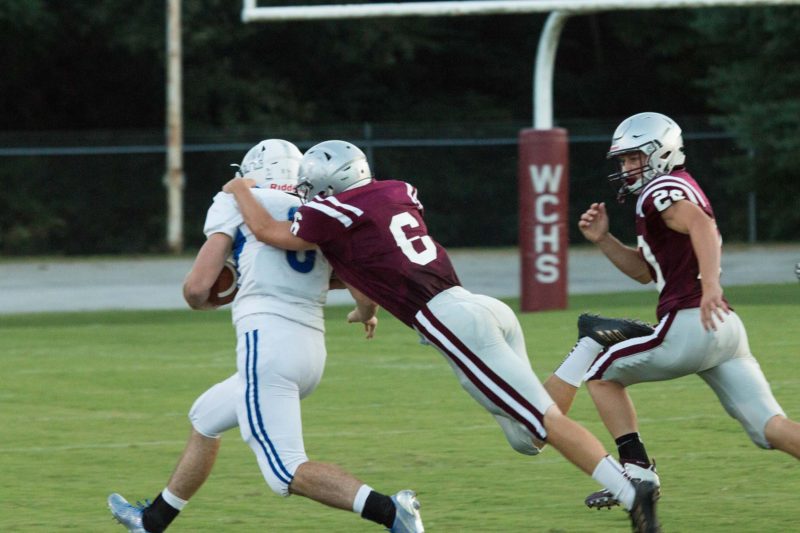 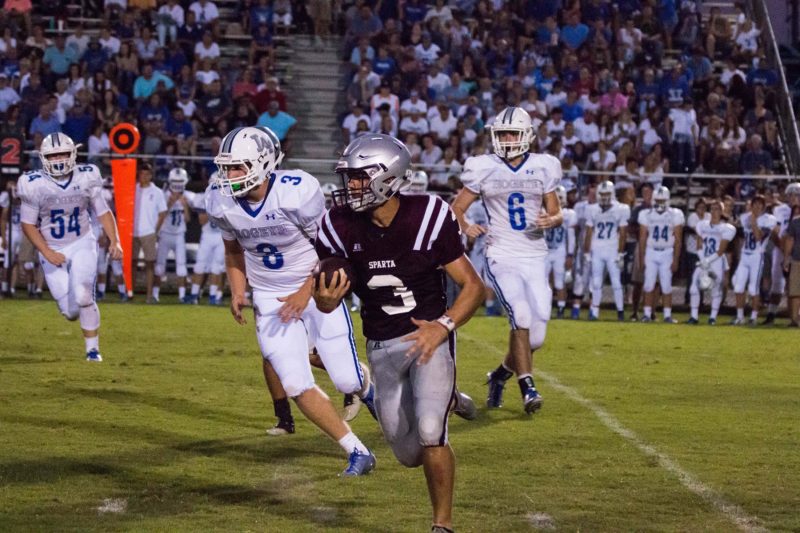 Allen Shoupe looks for running room around the end on Friday night. (Photos by ANDY SOUTHARD)

The White County High School Warrior football team opened the 2017 season by hosting Livingston Academy, on Friday night, on Dee Harris Field. Big plays by the Wildcats made for a disappointing opening night for WCHS as Livingston Academy shut out the home team 35-0.

Of the five Smith County touchdowns scored in the contest, four of them had plays in the series where there was at least one play that went over … CONTINUED

The scenes of judgment

It is a fact that every person who has ever lived will be judged according to his works upon this earth (2 Cor. 5:10). But, do we ever think about the Judgment Day and the scenes that we will see? As we are all standing and waiting to be judged, we will see scenes of joy, but we will see some sad scenes as well. Concerning that day, Jesus said, “Not every one that saith unto me, Lord, Lord, shall enter into the kingdom of heaven; but he that doeth the will of my Father which is in heaven. … CONTINUED

Witzigman to be included in The Trademark Women of Distinction

A White County businesswoman has been notified that she will be included in the upcoming Trademark Women of Distinction Honors Edition.

Earlier this summer, Barbara Witzigman, president and broker with Tri-Star Real Estate and Auction, will be included in the publication for demonstrating dedication, leadership, and professional excellence, according to organization leaders.

“Witzigman’s compassion and expertise set the standard in the industry,” said TWD Executive Director of Public Relations Amber Rogers. “She has truly dedicated herself to her profession. As a talented, disciplined professional, she has maintained a proven track record of quality service, driven by her desire to succeed.”

Trademark Women of Distinction is a professional organization … CONTINUED

Karley Warner, an 11th grader at White County High School, recently attended the 94th Annual TN 4-H Roundup and All Star Conference, which was held at the UT Martin campus. Warner was a state finalist with her achievements in her Sheep Project portfolio.   At Roundup, competitors have to interview with judges and share their knowledge and expertise on their individual projects. Winners are determined based on their performance at Roundup as well as their project books/portfolio, which have already been submitted and judged.

It’s not just about symbols of the Confederacy, it is far more

The protests that took place in Charlottesville, Virginia, recently were not about monuments erected to the Generals of the Confederacy. It was about hate – pure and simple. I support people’s rights to protest, their free speech, and their right to express their opinions. I do not condone violence as part of a protest or to stifle someone else’s right to speak freely. I do not have to agree with them. I don’t have to like what they say and how they say it. I do believe I have the right to stand with a sign with a slogan to protest what … CONTINUED

The six most imminent dangers to the United States

To say that today we, as a nation, live in a dangerous world would be in the running for the understatement of the year. Case in point – for the last several months, the unhinged despot leader of North Korea, Kim Jong-un, initiated and has played a game of “nuclear chicken” with our country. Not since the Cuba Missile Crisis, in October 1962, when the world held its breath for 13 days and the massive series of war games in November 1983 by the United States and its NATO allies (Code Name Autumn Forge), which … CONTINUED

Local and state officials are prepared for eclipse event, public urged to plan ahead and be safe

With all the excitement surrounding the eclipse happening today, there are also plenty of concerns for highway and safety officials.

At approximately noon, Aug. 21, many Sparta-White County residents will begin to notice the start of the solar eclipse event as the partial phase begins. At 1:30:04 p.m., totality will officially start and will last in White County for approximately 2 minutes and 39 seconds.

With all of the excitement of the solar eclipse and the great viewing opportunities, local and state officials are preparing for a potentially high influx of traffic and visitors. State officials have expressed the need for locals to be cautious because of the … CONTINUED

Sheriff and judge named in federal lawsuit over eugenics claims

A federal lawsuit was filed last week in federal court against several White County officials that stemmed from what the plaintiff’s attorneys called a “resurgence of eugenics.

The lawsuit was filed with the United States District Court for the Middle District of Tennessee. The law firm had previously stated, “The sheriff and county leaders conspired to violate the constitutional rights of those they determined were ‘undesirable’ by forcing inmates to receive birth control implants or vasectomies in order to … CONTINUED

County commissioners voted last week in front of a packed courtroom to develop a jail committee to address overcrowding issues at the jail that could lead to decertification of the facility.

On Aug. 16, 2017, commissioners who are members of Steering Committee B met with several state officials, attorneys, and representatives from Tennessee Corrections Institute. The topic of the evening was to address the growing concerns of the overcrowding population at the White County Jail.

As previously reported, the results of an inspection report for the White County Jail from Detention Facility Specialist Joe Ferguson, of Tennessee Corrections Institute, was presented to White County commissioners July 10, 2017. … CONTINUED