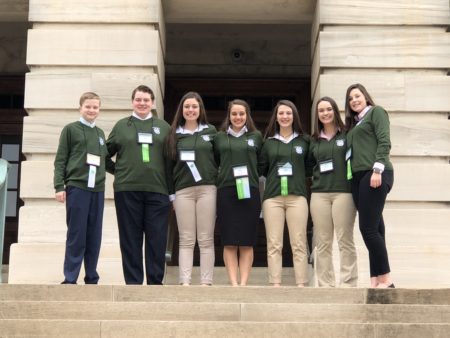 It all starts as a seed; you nurture it so the seed becomes strong enough to stand on its own. You carefully watch the growth process. As it grows, it plants itself firmly in the ground and sprouts to start its journey to become a tree.

The 71st Annual Tennessee 4-H Congress event was held March 18-21, 2018 in Murfreesboro, Tennessee at the Embassy Suites Hotel. This year’s event had a theme called, “Branching From Our Roots.” To 4-H’ers, this means to expand our organization and our community service throughout Tennessee and the world.

The Tennessee 4-H Congress program is mainly for 9th and 10th graders, but you can return to congress as 11th and 12th graders by competing in 4-H portfolio projects. The freshman and sophomores attend as senators and representatives. Two senators are allowed from each county and the rest are representatives. Everyone is known as a delegate. The event is demonstrated as a mock government.

Since 4-H Congress’ beginning in 1948, 35,000 4-H’ers have attended. This year approximately 400 delegates participated in the annual event.

The theme for the 2018 Tennessee 4-H Congress service project was “Our Hands to Larger Service.” Delegates were asked to collect items to help families who are being housed by the Ronald McDonald House in Nashville, Tennessee. This year we collected around 3,000 items for the project.

Our county’s senators were Dylan Simmons and Jessica Delong. Our representatives were Macy Delon, Gus Sullivan, Morgan Bouldin, Chloe Hillis, and myself, Chloe’ Ragland. Dylan Simmons and I ran for a state position. Dylan ran for Governor and I ran for Speaker of the House. Our parent volunteer, Katina Simmons and our 4-H agent, Paula May attended this event with us.

We arrived at the Embassy Suites Hotel on Sunday around 3:00pm. Our 4-H agent registered us and our next step was to settle into our living quarters for the next three days. While all the 4-H’ers were getting registered and getting settled in, it was time for Dylan and I to do a little campaigning.

The next day, we ate a buffet breakfast hosted by the hotel. After everyone ate, we were split up onto four buses. Two, went to the Capitol and the other two went to the Avon Williams Campus of Tennessee State University (TSU), where educational sessions took place. Any of the candidates who were running for Speaker of the Senate and Speaker of the House and that made it to the next round, gave two speeches at the Capitol. The senators went to the Senate Chamber. The representatives went to the House Chamber. After all the activities were finished our county went to meet with Senate Janice Bowling and Representative Cameron Sexton. After that we toured downtown Nashville for a while. Everyone was to meet back at TSU to return to the Embassy Suites Hotel around 8:45pm. Once we arrived back at the hotel, it was time for all regional candidates for Governor to give their speeches.

The following day, on Tuesday was election day!!! That morning each region met in their own room for a regional breakfast. After breakfast, polls opened for election. Senators could only vote for the Governor and Speaker of the Senate. Representatives could only vote for Governor and Speaker of the House. Before everyone voted, I tried to campaign to the Western and Eastern regions, to gain their vote.

The next event was the general assembly. The 2018 4-H Governor, Sorrell Martin announced the top two candidates for a run-off speech. I was in the top two! I couldn’t believe it. I made it this far in the election and I couldn’t give up now. I gave my speech, then all the delegates had to go vote again. We all gathered back in the assembly room for the History Bowl. Dylan Simmons represented our Central region along with another delegate. Weatherman, Lelan Statom, hosted our State 4-H History Bowl. The objective was to buzz in before the other regions, answer the question correctly, and reach 200 points before the others. Each correct answer was worth 10 points and each incorrect answer was worth a -10. The Central Region was down when Dylan made a huge comeback and won the History Bowl!

Following the History Bowl was “Operation Patriotism.” The Tennessee Air National Guard presented America’s history through a heartwarming poem. They showed America’s flag as it grew and changed through the years. I thought the performance was amazing. The poem was so well written that it brought tears to my eyes. I felt like I could feel the history of America and her brave heroes. The next thing on the agenda was to announce the 2019 4-H Congress Officers. Congratulations to the newly elected 2019 Tennessee 4-H Congress officers. Governor, Katherine Ann Thierfelder of Madison County, Speaker of the Senate Claire Brooks of Warren County and Speaker of the House Chloe’ Ragland of Van Buren County.

That same evening the delegates boarded the General Jackson Showboat for a theatre lunch. That event lasted for about four hours. The boat docked and we returned to the hotel. It was time for the Citizenship banquet, where donors to 4-H Congress and delegates attended. Everyone was seated to a formal dinner and had to dress formally. Donors were recognized and the new officers were sworn into office

Immediately following the banquet, was the Inaugural Ball. This was where all the delegates got together and had a huge dance. That night more close friendships were made, friendships that would never be broken or forgotten.

The last day came and everyone had to say their goodbyes. Some goodbyes would be their last ones and some for just a short while. Memories and friendships were made that week. I know for me, I made so many amazing memories and great new friends that I will never forget. At congress, I learned so much and gained so many new skills that will benefit me later on in life. I can say that Congress was the best week of my life. I certainly will never forget any of it. 4-H is a part of me that means the world to me. It has helped me grow as a young adult and learn new life skills along the way. I cannot imagine where I would be in life, if it had not been for 4-H.

I asked everyone that attended Congress with me from our County, two questions; 1. Describe your 4-H Congress experience, including your favorite parts and 2. If you could use one word to summarize your 4-H experience what would it be? Each associate’s response is listed below:

Morgan Bouldin: “My 4-H Congress experience was awesome. My favorite activities were the dance and history bowl. They were so fun and exciting, and I would love to experience them again. Congress was even more exciting to me, because my friend was running for a office. I loved cheering her on and seeing her win! Overall, I would love to go back and see all the new faces I met, and experience all the fun activities again.” Morgan’s one word to describe her experience was “Crazy.”

Dylan Simmons: “My 4-H Congress experience was one that I will never forget. The Tennessee History Play on the first night was a fun and incredible experience. I loved the second day of going to TSU and learning about different modern activities. The Senators meeting later that day was very exciting, and helped me to better understand state government! On Tuesday I had the special honor of participating in the State History Bowl Contest! Actually winning was something that will imprint me for the rest of my life. The General Jackson riverboat was very incredible, and helped me realize how riverboats work and function. These are just a few of the highlights of my experience. I would strongly suggest that anyone who is interested should take time to attend. It was a great experience that left a lasting impression on me, and I know it would for other children too!” Dylan’s one word to describe his experience was “Impactful.”

Jessica Delong: “My time at Congress was very enjoyable and I benefitted in many ways. I met people that I will never forget. I enjoyed learning how things work at the Capitol building in Nashville. This trip was a once in a lifetime chance and I am very thankful that I got to experience it.” Jessica’s one word to describe her experience was “Unforgettable.”

Macy Delon: “4-H Congress was defiantly an experience I’ll never forget. I met friends that I will cherish forever and skills I will always remember. I am forever thankful for getting the opportunity to participate in such a life changing event.” Macy’s one word to describe her event was “Memorable.”

Gus Sullivan: “Congress was an experience unlike anything I’ve ever been to before. I learned many things about our government and even got to meet some of our representatives, which was very interesting. I also had tons of fun in downtown Nashville as we walked around sightseeing and at the banquet where we got to see many people get their hard earned awards. So I encourage anyone who can go to congress to seize the chance and go. Thank you to everyone who supported us.”

As you can see 4-H Congress has had a huge impact on each of us. It’s was an amazing opportunity to learn new skills and meet many new people. I would like to say thank you to our parent volunteer, Katina Simmons for putting up with us the entire week and keeping me sane during the election. I would also like to say a huge thank you to our 4-H Agents, Paula May and Chris Binkley for choosing us to represent Van Buren County and giving us the opportunity to have the best time of our lives.