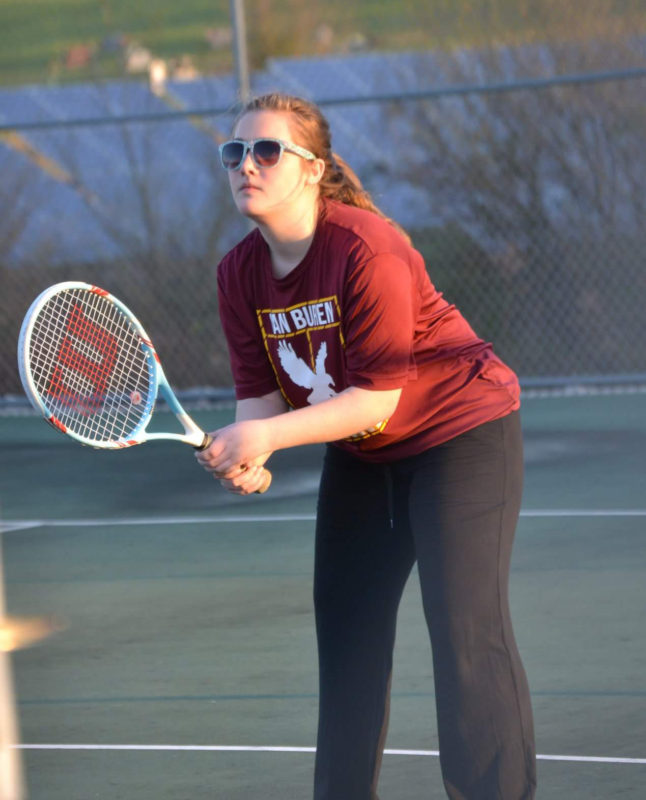 Van Buren County tennis opened its season with a home district match against Cannon County. The opener resulted in a loss for the home team but was not short on highlights. Brandon Skiles won his match in the number two slot over Cannon County’s Lane Willis 8-5. Katie Moffitt and Lilly Powell also got a W in a doubles match with a score of 8-6. Both number ones played in close games that resulted in loss, with Aleysah Dyer losing in a tie-breaker and Alex Cope falling just short with a score of 6-8. Van Buren tennis will play their next match on March 16, with a district … CONTINUED 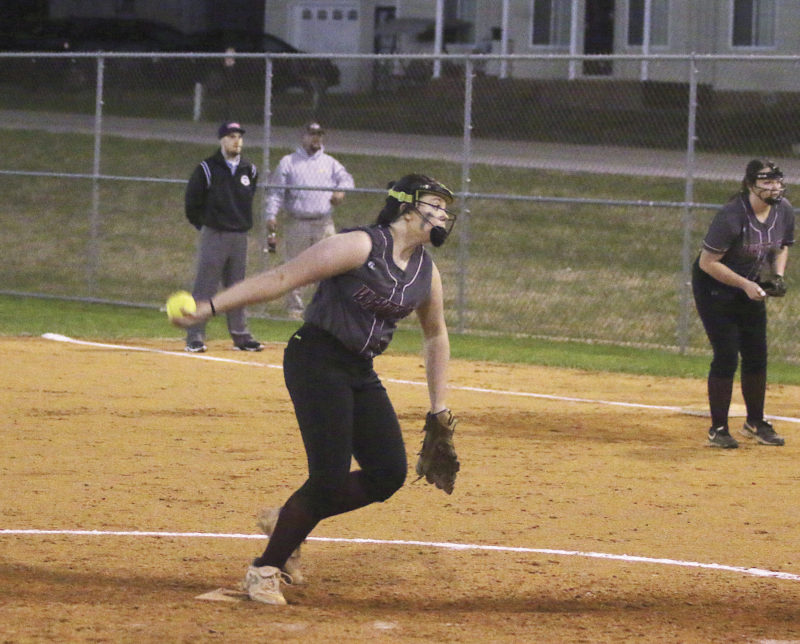 Ashlynn Phillips threw a no-hitter, on Thursday night, as the Warriorettes took down Monterey Middle School in a Military Appreciation game. Phillips struck out 15 batters in the win. 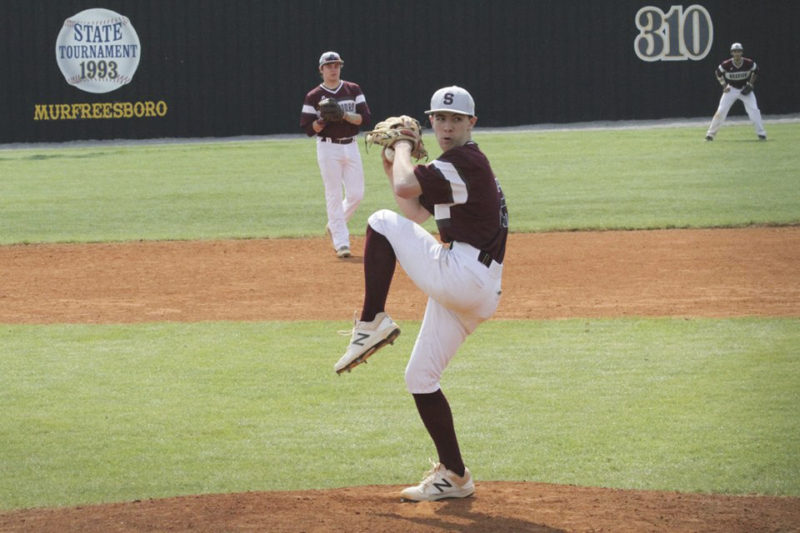 Tucker Allen throws a pitch in Friday’s game against Seymour. Allen got his first varsity start on the mound this weekend. He went three innings in the outing.

The Warrior baseball team competed in the Cure 4 Cancer tournament played in the Gatlinburg-Pigeon Forge area over the weekend and split their four games.

WCHS began tournament play Friday against Gibbs. Gibbs jumped out to an early 2-0 lead on the Warriors with back-to-back home runs. Gibbs would pick up a single run in the third and fourth innings to … CONTINUED 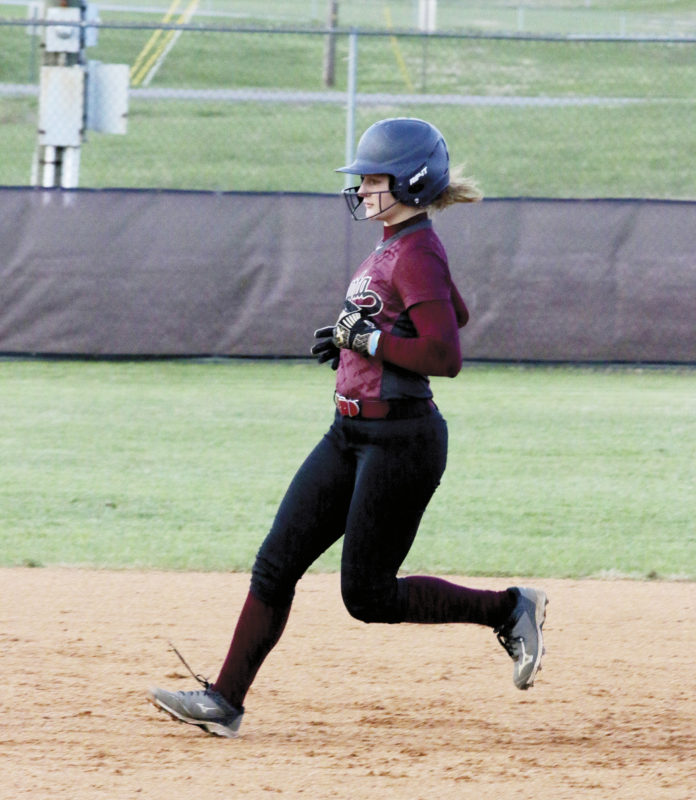 Dani Auberger strolls into second base on a double that she hit early this week. Auberger has helped lead the Warriorettes to the early 3-1 start.

The Warriorette softball team added two more victories to the win column, on Saturday, but was unable to hold on to a lead late on Thursday night, dropping their first game of the season.

After an opening night win, on Tuesday, the Warriorettes played host to Sequatchie County, on Thursday night. The Warriorettes’ defense struggled, as they committed five errors, which led to five runs in a 6-5 loss to the Lady Indians.

However, the Warriorettes would quickly turn things around, on … CONTINUED

Celebration of Craft is set for April 7

The 20th Annual Celebration of Craft will be 9 a.m.-5 p.m., April 7, at Tennessee Tech University’s Appalachian Center for Craft in Smithville.

This free, family-friendly event gives the community an opportunity to immerse themselves in art at the Craft Center. Go behind the scenes and watch live studio demonstrations, chat with current students and alumni and meet our faculty, staff and artists in residence.

Kids can choose from a number of hands-on crafts in which to participate and get a taste of what students learn while enrolled at the Craft Center. Activities include folding and dyeing paper, paper making, tempera enameling, stained “glass” lantern making, and tie-dyeing … CONTINUED

Last week in Nashville, Governor Bill Haslam announced the formation of a working group of leaders from the executive branch, General Assembly, safety, education, and mental health communities to immediately begin reviewing school safety in Tennessee and provide recommendations to enhance the security of school children.

While all schools in Tennessee currently have safety plans in place, the Governor’s working group convened to review the policies, procedures and process of developing and implementing those plans, as well as other school safety measures, including communication and collaboration among law enforcement, educators, and mental health professionals.… CONTINUED

Senate Committees worked diligently this week, wrapping up budget hearings for various agencies and departments of state government and moving a number of important bills to the Senate floor for final action. The budget will be a key area of focus for the General Assembly during the final weeks of legislative action, as Governor Bill Haslam is expected to deliver his supplemental appropriation amendment next Tuesday.

One of the bills which moved out of committee is legislation which I am sponsoring that prevents harassment and intimidation of the clergy in Tennessee. In 2015, our legislature passed a law that prohibits any government entity, … CONTINUED

Taking the harvest to the next level

A few things that I learned from growing up on a farm that I can distinctively remember concerning planting is that you have to cultivate what you can’t see now in order to harvest what you can see later. And there’s always going to be challenges from planting time to harvest time – too much drought, too much rain and wind. Too many animals – … CONTINUED

How to face a lion and survive

A couple once took their 11-year-old son and 7-year-old daughter to Carlsbad Caverns. As always, when the tour reached the deepest point in the cave, the guide turned off all the lights to dramatize how completely dark and silent it is below the earth’s surface. The little girl, suddenly covered in darkness, was frightened and immediately began to cry. As soon as her brother heard it, he said, “Don’t cry. Somebody here knows how to turn on the lights.”

Oftentimes we are afraid of those things we cannot see or things that are unknown to us. Have you ever spent … CONTINUED

Has Trump’s administration become a spin-off of the reality show “Survivor?”

I don’t think anyone would deny that Donald Trump has a large ego. At every possible opportunity, he tells the American public how smart he is and how he, alone, is making America great – again. We have also seen proof, since his inauguration, he does not like anyone who works for him to disagree with him. As of last week, approximately 40-plus people have resigned or were fired from Mr. Trump’s administration. This number does not include employees from various departments and government entities that have resigned or were “permanently” furloughed due to “restructuring and budget reductions.”

Will the Tennessee Democrat Party condemn Bredesen for covering up sexual harassment cases?

It will be interesting to follow Phil Bredesen’s run for senator from Tennessee. With Bob Corker, a sometimes-conservative Republican not running for re-election, there will be an open seat this year. And Bredesen, the popular former governor of Tennessee, is throwing his hat in the ring.

Democrats have always been far more willing to attack Republicans over misbehavior than members of their own party. You may recall when President Nixon was trying to keep his job, it was a group of Republican senators led by Tennessee’s own Senator Howard Baker that took the trip up Pennsylvania Avenue to tell him they … CONTINUED 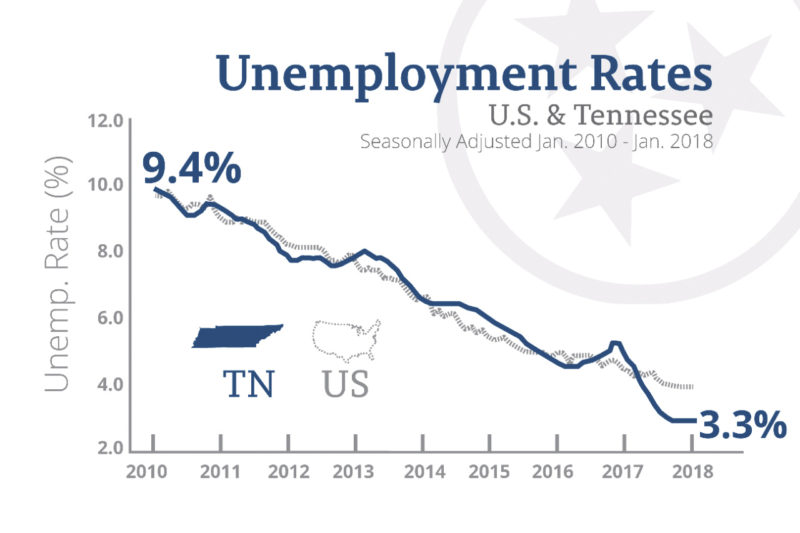 According to the recently released data, the vast majority of the state’s 95 counties, including White County, continue to record unemployment rates under 5 percent, and every county’s rate was lower than it was in January 2017.

“Because of seasonal employment trends, Tennessee typically sees a slight uptick in county unemployment at the start of the year,” explained Tennessee Department of Labor and Workforce Development Commissioner Burns Phillips. “But the year-to-year comparison of statistics shows just how well the state … CONTINUED