The White County School Board will conduct a work session at 6:30 p.m., on Tuesday, May 8, 2018, at the White County Board of Education, on Baker Street. The sole purpose of this work session is to discuss the possible closing of Central View Elementary.

White Possum Grille, on Mose Drive, in Sparta, in the old Wendy’s location, is ready for business as they put the last-minute finishing touches on the restaurant. The exact opening date has not yet been confirmed. However, everything is moving forward at a steady pace. (Photo by DENISE WHERLEY) 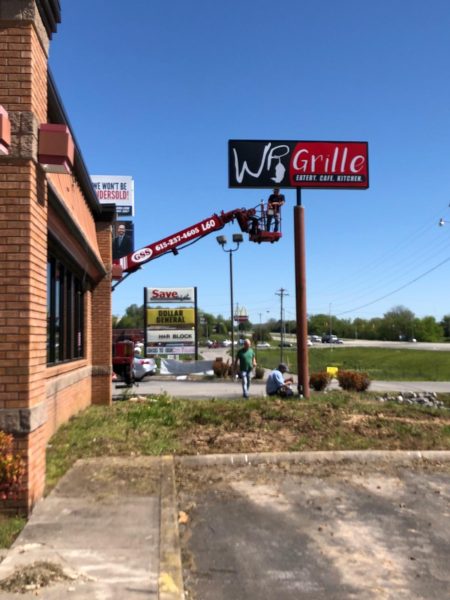 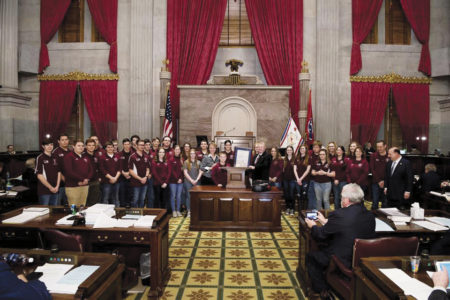 State Representative Paul Sherrell, of White County, is shown holding a proclamation honoring the White County High School Archery Team as the state champions, which was presented recently during the session of the Tennessee Legislature. State Senator Paul Bailey, also of White County, is pictured on the right.

Warriorettes close out their week with two wins

In the second game of the day, the Warriorettes would score five times in the first three innings to take … CONTINUED

The Warrior baseball team picked up two big wins over District 6AAA foe Stone Memorial, on Friday night. Those wins moved the Warriors to 5-6 in district play, with only one game to play on Monday when the Warriors travel to Rhea County.

Then I said to them, “You see the trouble we are in. Come let us rebuild.” These were the very words that Nehemiah spoke to the distressed nation of Israel in chapter 2 concerning their vulnerability and the rebuilding of the walls of protection around the city.

God hasn’t given up on you. Albeit we may not be able to   see through the darkness right now, but God just might be about to shine a light on a rebuilding process in our lives.

The story of Nehemiah is a perfect example for us to look at. Nehemiah was grieved at the state … CONTINUED

In the final few days of this year’s legislative session, State Representative Paul Sherrell (R-Sparta) and the House of Representatives passed Tennessee’s annual budget with a near unanimous vote. The bill’s passage and official adjournment was the culmination of months of tireless work crafting a fiscally responsible and balanced budget.

The $37.5 billion budget builds on previous legislative priorities by making strategic and thoughtful investments across state government. Because of the conservative fiscal choices lawmakers have made over the last several years, Tennessee currently ranks as the lowest taxed and lowest debt state … CONTINUED

The nation is in your hands

As is becoming abundantly clear with each report filed and each investigation concluded, there is absolutely no evidence of a Trump / Russia collusion. Yet the special prosecutor investigation drags on. The question we are now left with is what or which authority can shut down this illegitimate and probably illegal special prosecutor?

Who really runs the United States of America?

The obvious answer should be, WE THE PEOPLE. The real answer, which is becoming more with every day under this current administration, is the 2 percent of people and corporations that have the most money. The majority of Americans have been losing their voice in the way our government runs for a very long time. There hasn’t been an obvious coup or one specific incident that you can point at and say, “Yep, that’s exactly the moment the majority of us lost our power and our voice.” Perhaps the closest “incident” we can point to is the Supreme Court 5-4 decision, in … CONTINUED 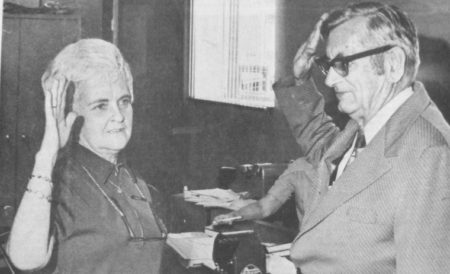 Judge David Snodgrass administers the oath of office to Nell Marchbanks, in 1974, after she was elected as county commissioner.

In what many consider to be the greatest birth milestone, Nell Marchbanks, born on May 23, 1918, will have spent 100 years on this earth in less than a month and have celebrated a century of caring for those she loves.

From raising six children, serving 28 years as White County’s first female county commissioner, and having a dedicated career with The Expositor, Marchbanks has had a lifelong journey serving both her family and her community.

Tempers flared last on April 26 as talks about closing the doors on Central View Elementary School got underway.

Kurt Dronebarger, White County director of schools, led the discussion about the potential school closing at the town hall meeting held in the gymnasium of Central View. Dronebarger began the discussion with a PowerPoint presentation explaining how money was divided up within the school system. He said that the money being put into Central View Elementary was essentially a waste due to the small amount of students who attended the school as opposed to the higher amount of students that attend other … CONTINUED

Finley Clay Rice, 60, of Sparta, passed away this morning, at his residence.

Funeral and cremation arrangements are entrusted to Hunter Funeral Home.