•Students at SES were surprised by a special guest reader on the last full day of school before Christmas break, Mrs. Claus. She took time out of her busy schedule to read to all students. Also, family reading night with special guests Santa and his elves was a huge success.

•There were so many students and family members packing the classrooms that many moved into the hallways to read and take AR tests. Students reading and testing were rewarded with cookie decorating, ornament making, hot chocolate and even a visit to Santa’s sleigh for a prize.

•To get excited about the upcoming family reading … CONTINUED

Tennessee Department of Finance and Administration Commissioner Larry Martin announced Dec. 17 that overall November state revenues were $1.0 billion, which is 8.98 percent more than November 2017 and $45.9 million more than the budgeted estimate.

In Van Buren County, revenues are lower for the month of November. According to Van Buren County Mayor Greg Wilson, several factors can be attributed to the revenues slightly falling over the last few months. He states that the hotel closure did not help the bottom line.

“Sales tax is down due to the closure of Fall Creek Falls Inn,” said Wilson. “Gas tax falls under the road supervisor, the trustee hotel/motel … CONTINUED

The current turmoil radiating from the occupant living in the White House is hitting epic proportions, and something must be done for the future of America.  Donald Trump’s staunch supporters can no longer ignore his way of running our government and our country.  I know there are still some people who will totally disagree with my assessment of Mr. Trump’s leadership, yet I think it is time to have an honest reality check.  Donald Trump is heading for disaster and taking all of us along with him.  He is showing all the signs of unraveling under the pressure of his presidency, and … CONTINUED

When God takes life by the horns

A friend of mine once said, “It doesn’t matter what you do in the season, as long as you win in the tournament.”

So here we are in the last week of 2018. I guess you could say the season is over. Our thoughts begin to shift toward taking down the ornaments the decorations and the tree. We begin to focus more on resolutions and less on Christmas. But to think about the year 2019 beginning in a few days makes you kind of wonder where the years went.

When I was a kid growing up, we could only imagine the 2000s … CONTINUED

On Jan. 1, 2019, 23 new laws become effective in Tennessee. The following is a synopsis of those laws. Visit www.legislature.state.tn.us for more information.

White County continuously strives to attract residents and new businesses through the concerted efforts of Sparta-White County Chamber of Commerce and county government officials. According to Chamber President Marvin Bullock, the key to White County’s economic growth, in 2019, lies in tourism.

Bullock stated White County has amassed a significant amount of land over the past year that will be used to attract tourists, and, according to Bullock, this attraction has shown that people will “relocate where they recreate.”

“The amount of land we have to work with now has increased by over 25 percent over the last three years,” said Bullock. “This means we will have to … CONTINUED

Looking back at top stories of 2018

Numerous stories garnered the public’s attention during 2018. The following is a synopsis of those top stories.

According to a press release issued Dec. 2, Putnam County Sheriff’s Office investigated a shooting that occurred around 10 p.m., Nov. 30, 2018, at a residence on Bunker Hill Road near the White County line.  Deputies from Putnam and White counties responded to a residence, in White County, where a shooting victim was located. The victim was identified as a 26-year-old White County man. He was transported by ambulance to Cookeville Regional Medical Center and later transferred to … CONTINUED

According to a recent report released by the Boyd Center for Business and Economic Growth at the University of Tennessee Knoxville, on the heels of very strong growth, in 2018, experts project that Tennessee and the U.S. will see sustained economic growth, in 2019, with the potential that growth could slow as the economy confronts tightening labor markets and rising interest rates.

Over the past year, White County has seen an upward movement in economic growth. According to White County Executive Denny Wayne Robinson, this is expected to remain the same throughout 2019. Robinson stated the county will continue to work toward attracting new businesses, especially new retail … CONTINUED

The Tennessee Highway Patrol will be conducting Sobriety Roadside Safety Checkpoints starting on January 6th, 2019 through January 12th 2019, on US HWY 70, in White County. 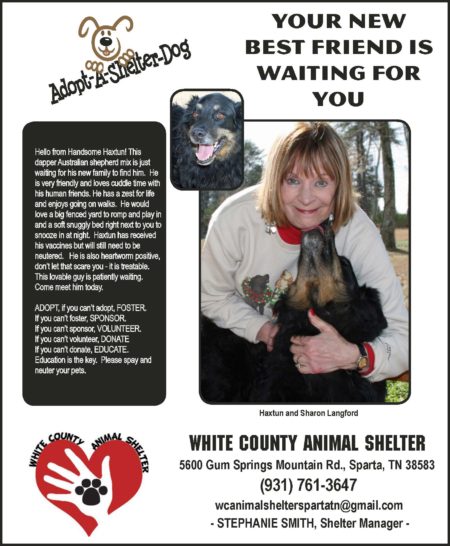 The Warriorettes pull ahead in the forth quarter to win the 29th annual Sunshine Classic. The Warriorettes trailed by two heading into the final quarter of play, but were able to come from behind to pick up the 45-39 win over Pulaski County High School. Kendreah Reeves led the Warriorettes with 12 points and Mia Murray chipped in 11 points. After the tournament, Mia Murray, Julia Curtis, and Kendreah Reeves were all named to the all-tournament team. Gracie Dodgen was named the MVP of the Tournament.

With the championship win, the Warriorettes move to 16-0 on the season.

Warriorettes trail heading into the fourth

Tue Warriorettes struggle and trail 29-27 heading into the final quarter of play.