2019 Conservationist of the Year 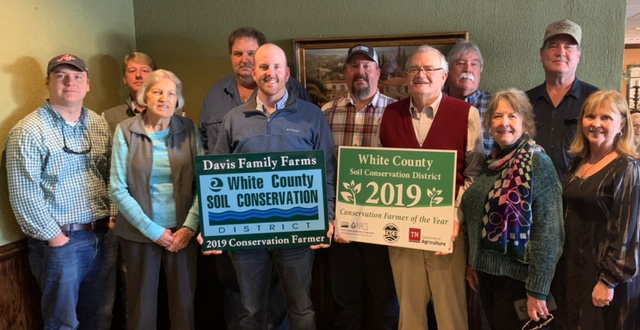 The White County Soil Conservation District has named Davis Farms as its 2019 Conservationist of the Year. Davis Farms is a row crop operation owned and operated by Wayne Davis and his three sons: Mark, Matt, and Andy. The Davis’ farm is roughly 3,000 acres consisting of corn, soybeans, and wheat. They provide custom farming services on 1,000 acres for other farmers in the community.

Wayne and his father, Leonard Davis, purchased 103 acres in the Northfield community of White County, in 1974. The farm began as a purebred Yorkshire farm consisting of 50 sows at its peak. Wayne sold seed stock to feeder pig operations in the state and across the Southeast. They also raised roughly 70 acres of corn and wheat, which was used for hog feed. He did that job, in addition to working full-time off the farm as a rural mail carrier for the United States Postal Service. Conservation practices were a major focus from day one as Leonard worked as a conservationist for the Soil Conservation Service (now the Natural Resource Conservation Service), in Putnam County. Leonard was instrumental in helping bring no-till farming practices to this area.

In 2002, the Davises got out of the hog business entirely and began transitioning to a row crop operation. As the operation grew, Wayne’s oldest son, Mark, transitioned to the farm full-time. As of 2017, all three sons are full-time farming. Depending on the year, Davis Farms produces approximately 500 acres of wheat followed by double-crop soybeans, 1,000 acres of full season beans, and 1,500 acres of corn. In 2016 and 2018, the farmers took first place in the no-till corn category in the National Corn Growers Association Yield Contest. The 297 bushels per-acre yield, in 2018, was good enough to place third in the nation. They have also grown canola and milo in the past. Their farm in the Northfield community serves as headquarters where they have roughly 200 thousand bushels of on-farm storage. The storage allows for more efficiency at harvest time in addition to providing better marketing opportunities. Most of the grain is marketed to Woodall Grain, in Manchester, Tennessee.

The Davis’ credit much of their success to their progressive production and conservation practices. They grow their crops in a 100 percent no-till system. They were some of the first farmers in the area to use precision farming technology such as variable rate, section control, yield mapping, and GPS guidance. These practices allow for efficiency gains but also ensure seed, chemical, and fertilizer are not being over-applied. The Davises have also began partnering with NRCS to grow winter cover crops with a focus on soil health. Over the last two years, they more than doubled their cover crop acres from 400 to 900.  Wayne’s youngest son, Andy, recently completed several conservation projects on a farm he purchased, in 2016, where he produces cattle and row crops. The project included the installation of cross-fencing and watering facilities, which included a water well development, pumping plant, pipeline, and heavy use areas to allow rotational grazing of cover crops over row crop ground and the addition of exclusion fencing to control livestock access to sensitive areas.

Davis Farms for its dedication to conservation and education.

They donated their time and farm for the 2019 Farm Bureau Farm City Day, which allowed over 400 White County children in third and third grades to attend.  The Davis family’s responsible land stewardship has prevented soil erosion, protected water quality, and preserved White County’s rich farmland now and for future generations.