Where: The Splash, on McMinnville Highway (formerly known as Wet Willie’s)

She was known by many names – Becky, nurse, mom, and Granny B. She rarely met a stranger, and she would do anything for anyone who needed her help. She most enjoyed spending time with her family, shopping, riding the motorcycle with her husband, and playing with her puppy, Naomi. She always longed to be at the beach, so we honor her memory by taking her to spend eternity at her favorite beach. Her time here was shorter than expected, but … CONTINUED 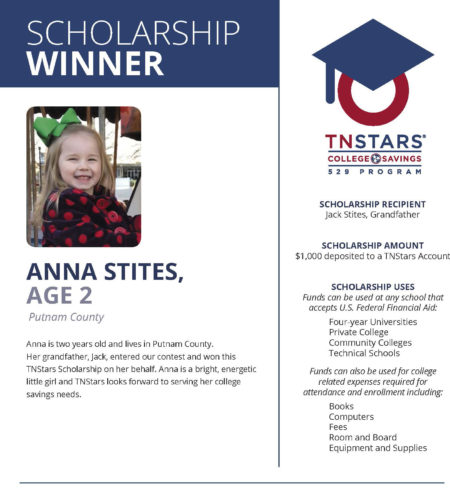 Putnam County girl is one of winners

Ten kids from across the state of Tennessee have been awarded $1,000 scholarships by the TNStars College Savings 529 Program. TNStars, a program of the Tennessee Department of Treasury, hosted the TNStars Holiday Scholarship Giveaway in December. Tennessee adults could enter  the contest on behalf of a child 15 or younger.

The scholarships are awarded into a TNStars account and can be used to  cover future post-secondary education expenses ranging from tuition and  housing to books, computers, and more. Winners of the TNStars Holiday Scholarship Giveaway were chosen at random among over 5,500 entries  after the contest closed on December 28th. … CONTINUED

Mrs. Dunn was born Nov. 20, 1940, in Chattanooga, the daughter of Edward Nunley and Virginia Griffith Nunley.

She worked at Red Kap Industries for over 40 years. She was also a member of West Sparta church of Christ.

He enjoyed carpentry, Hazzard Life, NASCAR, and his little riding buddy, Chug, who was always by his side.

The White County High School tennis team took to the courts to open their season March 12, at WCHS.

The girls won the team competition by winning six matches to Stone’s three.  On the male side, Stone defeated Sparta by a 6 to 3 margin as well.

Individually in singles play, Seth McCormack won 8-4 and Austin Burchett won 8-2 in his first match as a Warrior tennis player.  Burchett teamed up with Jake Colwell to win their doubles match 8 – 2.

On March 8 and March, 9 the White County High School and White County Middle School archery team went to the Dibrell tournament, in Warren County, and then on to Murfreesboro for the Blazing Arrow competition, on Saturday.

On Saturday, at the Blazing Arrow tournament, Parks won first place in the high school male division with a score of 292.

Warriors victorious over Upperman Bees but lose to Cavaliers

The Warrior baseball team opened up their season, on Monday, with a 5-1 home loss against Cookeville but quickly bounced back, on Tuesday, with a convincing 9-3 road win against the Upperman Bees.

On Monday, the Warriors struggled early and failed to come from behind as they missed out on key scoring opportunities. Cookeville brought in two runs during their opening at bats and kept the pressure on the Warriors as the game dragged on.

The Warriors were able to cut into the lead off of a Cameron Beasley single that scored pinch runner D.J. Paul and brought his team within one with the score of 2-1, but … CONTINUED

The Warriorette softball team got their season off to an excellent start as they earned victories over Macon County and Van Buren County, on Monday and Tuesday night. Although they fell behind in the first inning of their season opener, the Warriorettes were able to battle back and secure a 3-2 win.

The game was knotted up at two until a Hannah-Kate Simms homer gave the Warriorettes a lead that they would hold to the end.

In their second game of the week, the Warriorettes asserted their dominance at home. They won by mercy rule in a contest that ended, following the fourth inning. A barrage of runs … CONTINUED

One win, one loss for WCMS soccer

The White County Middle School Warriors traveled north to face the York Dragons in a soccer match, on March 11, and came home with a big win by a score of 7-2.

The coveted hat trick term originated from the game of cricket, in 1858.  When a player scored three goals in a game, that player was then awarded a hat, often filled with money.  Angelo Cheney went for the “hat trick” Monday night by scoring three goals to lead the Warriors.