Dr. Thurman was born Dec. 20, 1931, in Sparta, to Tom and Mildred Thurman. He attended Central Church of Christ, in Cleveland, and was a faithful member of the Lord’s church his whole life.

Being an obstetrician-gynecologist physician for 50 years, he took great joy in ushering in thousands of babies. Many of his patients tell stories of how he would sing a lullaby or hymn to their baby during delivery. Other patients shared how grateful they were for Dr. Thurman praying … CONTINUED 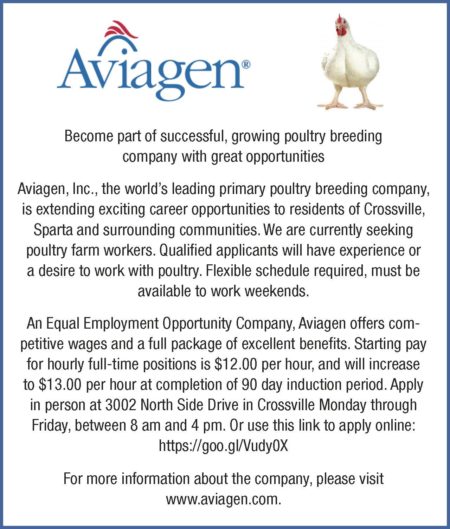 What: Louisiana-style crawfish boil (also bounce houses, games and other events for the entire family)

What; Breakfast (scrambled eggs, ham, bacon, sausage, potatoes, gravy and biscuits, pancakes on request), $7 adults and $3 children 12 and under

The family has chosen cremation. No services are scheduled at this time.

She was a retired shirt factory worker. When she was not sewing at work, she was sewing and quilting at home.

The statewide unemployment rate in Tennessee dropped to a new historic low in February according to data released Thursday by the Tennessee Department of Labor and Workforce Development. The seasonally adjusted rate of 3.2 percent is 0.1 of a percentage point lower than the previous historic low.

Tennessee reached its previous record low unemployment rate of 3.3 percent in October 2018 and it remained at the level for four consecutive months. The state began tracking unemployment rates in 1976.

Over the past year, Tennessee’s February unemployment rate decreased from 3.6 percent of 3.2 percent.

“To reach a record low unemployment rate is quite a milestone for Tennessee,” explained

White County Middle School Warriors fell behind early, on March 21, and couldn’t come back in a 12-0 loss to Prescott.

Prescott scored on a single by Justin Fallon, an error, a single by Caden Colson, a walk by Andrew Corbeil, a single by Evan Robinson, and a groundout by Briggs Cherry in the first inning.  The White County Middle School Warriors struggled to contain the high-powered offense of Prescott, giving up 12 runs.

Prescott got things moving in the first inning. Fallon drove in one when he singled.  Drew Kirby got the start for Prescott. He went five innings, allowing zero runs on zero hits, striking out … CONTINUED

After falling behind early, the Warriors could not claw their way back into their contest against Tullahoma.

On Friday night, White County was defeated by the score of 11-8 as they allowed six runs in the first inning and never took had possession of the lead.

Starting pitcher Hayden Farris struggled in the opening inning, allowing four hits. This, combined with a fielding error in the infield and a dropped third strike, put the Warriors down six as they left the first inning.

After a rough first inning in which they failed to get a runner on base, the Warrior offense finally got things going in the second. … CONTINUED

On March 21, the game against Ravenwood was a heartbreaker for White County Warriorette softball team as they lost the lead late in a 2-1 defeat. The game was tied at one, with Ravenwood batting in the top of the seventh when an error scored one run for Ravenwood.

The pitching was strong on both sides. Ravenwood pitchers struck out 17, while the Warriorettes sat down six.

The Warriorettes got on the board in the first inning when they scored one run on a stolen base.  Savannah Jones singles to center field to reach first base.  Caydra Parker then doubles to move Jones to third.  Jones then scores … CONTINUED

On a windy Friday night, the White County Middle School soccer team traveled north, on Highway 111, to take on the Livingston Wildcats in a middle school soccer match.

On March 22, Livingston took the early lead, scoring a goal at the 27:01 minute mark early in the first half. The Wildcats did not take long to add the second goal of the night. They scored at the 24:20 mark on the clock to extend the lead 2-0.

Both defenses took control for most of the first half until Nathaniel Griffin races past a defender to kick the ball into the back of the net at the 9:03 … CONTINUED