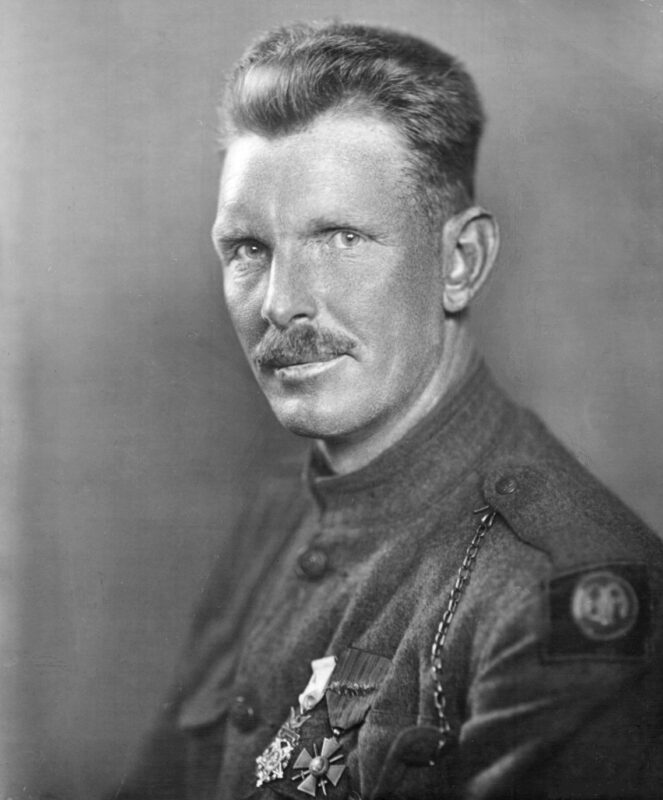 On Oct. 8, 1918, while serving on the Western Front, Army Cpl. Alvin C. York led a charge against a German machine-gun position during World War I, which resulted in 20 enemy casualties attributed to York alone, and the capture of 132 German soldiers.

Alvin Cullum York (December 13, 1887 – September 2, 1964), also known as Sergeant York, whose hometown was Pall Mall, Tennessee, was one of the most decorated United States Army soldiers of World War I. He received the Medal of Honor for leading an attack on a German machine gun nest, taking at least one machine gun, killing at least 25 enemy soldiers and capturing 132. York’s Medal of Honor action occurred during the United States-led portion of the Meuse-Argonne Offensive in France, which was intended to breach the Hindenburg line and force the Germans to surrender. He earned decorations from several allied countries during WWI, including France, Italy and Montenegro.

York was born in rural Tennessee. His parents farmed, and his father worked as a blacksmith. The eleven York children had minimal schooling because they helped provide for the family, which included hunting, fishing, and working as laborers. After the death of his father, York assisted in caring for his younger siblings and found work as a logger and on construction crews. Despite being a regular churchgoer, York also drank heavily and was prone to fistfights. After a 1914 conversion experience, he vowed to improve and became even more devoted to the Church of Christ in Christian Union. York was drafted during World War I; he initially claimed conscientious objector status on the grounds that his religious denomination forbade violence. Persuaded that his religion was not incompatible with military service, York joined the 82nd Division as an infantry private and went to France in 1918.

In October 1918, as a newly-promoted corporal, York was one of a group of seventeen soldiers assigned to infiltrate German lines and silence a machine gun position. After the American patrol had captured a large group of enemy soldiers, German small arms fire killed six Americans and wounded three. York was the highest ranking of those still able to fight, so he took charge. While his men guarded the prisoners, York attacked the machine gun position, killing several German soldiers with his rifle before running out of ammunition. Six German soldiers charged him with bayonets, and York drew his pistol and killed all of them. The German officer responsible for the machine gun position had emptied his pistol while firing at York but failed to hit him. This officer then offered to surrender and York accepted. York and his men marched back to their unit’s command post with more than 130 prisoners. York was immediately promoted to sergeant and was awarded the Distinguished Service Cross; an investigation resulted in the upgrading of the award to the Medal of Honor. York’s feat made him a national hero and international celebrity among allied nations.

After Armistice Day, a group of Tennessee businessmen purchased a farm for York, his new wife, and their growing family. He later formed a charitable foundation to improve educational opportunities for children in rural Tennessee. In the 1930s and 1940s, York worked as a project superintendent for the Civilian Conservation Corps and managed construction of the Byrd Lake reservoir at Cumberland Mountain State Park, after which he served for several years as park superintendent. A 1941 film about his World War I exploits, Sergeant York, was that year’s highest-grossing film; Gary Cooper won the Academy Award for Best Actor for his portrayal of York, and the film was credited with enhancing American morale as the US mobilized for action in World War II. In his later years, York was confined to bed by health problems. He died in Nashville, Tennessee, in 1964 and was buried at Wolf River Cemetery in his hometown of Pall Mall, Tennessee.