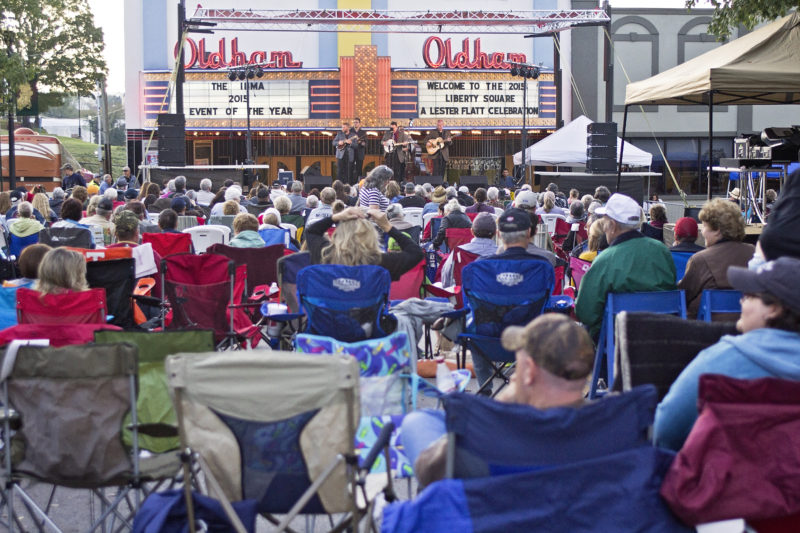 Liberty Square: A Lester Flatt Celebration is an internationally award-winning music festival, so it is only fitting that the performers this year are award winners themselves.

The lineup for the event, slated for Oct. 8, includes Breaking Grass, Blake Williams and Friends, Kenny and Amanda Smith and Lonesome River Band.

Headlining is Lonesome River Band, whose lead singer, Sammy Shelor, is a 2011 recipient of the prestigious Steve Martin Prize for Excellence in Banjo and Bluegrass. Only one performer is selected to receive this award per year.

Shelor is also a five-time International Bluegrass Music Association Winner for Banjo Performer of the Year and a Virginia County Music Hall of Famer.

“They will be a huge hit for the crowd,” Kimberly Williams, of East Public Relations, who coordinates the music for the event each year, stated.

Breaking Grass, who stopped by Sparta in 2015 for an impromptu show at the amphitheater, will once again return with a modern fresh take on bluegrass.

Blake Williams and Friends will once again return to perform. Kimberly Williams says Blake Williams, also an IBMA award recipient, always puts together a top-notch band to perform at the event that highlights some of the best bluegrass talent.

Something new that attendees can expect this year is a performance by some of Sparta’s youngest up-and-coming bluegrass artists, a band dubbed G2 (pronounced G Squared), who will perform the national anthem during the opening ceremony.

Liberty Square: A Lester Flatt Celebration is an annual event sponsored by the City of Sparta. The event is focused on celebrating Sparta’s rich heritage in bluegrass music and is named after one of the genre’s forefathers, Lester Flatt, who called Sparta, Tennessee, his home.

The event features the best in bluegrass music each year, as well as a host of community organizations, clubs, businesses and other vendors who will have booths for attendees to peruse around the square. It also includes a classic car show.

Held annually in October, Liberty Square: A Lester Flatt Celebration takes place on Liberty Square, in downtown Sparta, and is free to the public.