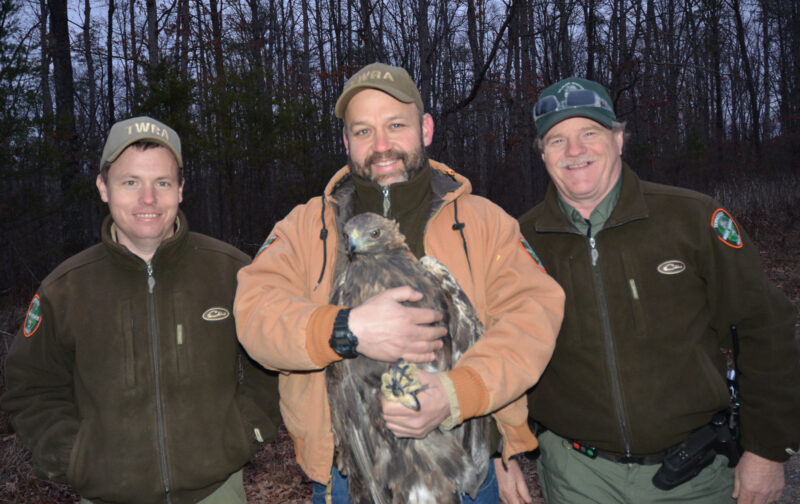 Bledsoe County Wildlife Officer Mark Patterson is retiring after nearly 35 years of employment. Known throughout the county, Officer Patterson has provided outstanding services throughout his career.

Patterson was hired in 1984 after attending the University of Tennessee, Knoxville. Upon completion of Tennessee Law Enforcement Training Academy, he was assigned to Bledsoe County where he and his wife Marla settled and started their family. In addition to his career, Patterson became active in the community with involvement in church, as a high school baseball coach and little league coach. Patterson was influential in starting the National Archery in the Schools Program in the county.

Patterson responded during several natural disasters, including the 2011 Dayton Mountain tornado and the storms on Center Hill Lake in 2003 that sunk several boats during a concert.  Patterson often stopped by county schools with a wild animal to teach students and he saw a few generations come through his hunter education courses.  He attended wild game dinners and was part of a guard detail for a vice president.

Awards received by Patterson include, Outstanding Achievement in Law Enforcement in Area 32, Region 3 Hunter Education Officer of the Year, South East Association of Fish and Wildlife Agencies Wildlife Officer of the Year and Tennessee Valley Chapter, Safari Club International Don Edgmon Wildlife Officer of the Year. TWRA, District 32 Captain Jeff Bishop stated, “Mark has been passionate about protecting Tennessee’s resources and his commitment has been unwavering. He worked just as hard to uphold TWRA’s mission at the end of his career as he did at the beginning.  His service and dedication will be missed.”

Patterson took great pride in helping the recovery efforts of wildlife in the county and assisted with the re-introduction of wild turkey and river otters. He watched the deer population grow allowing for higher harvests. Furthermore, Patterson was part of a year and a half undercover operation to stop illegal deer hunting with dogs.  Patterson worked tirelessly to reduce illegal activity in the county and prided himself on building trust in the long-standing relationships he formed. When asked what advice he would give new officers, Patterson replied, “Make friends and be a friend in the community. I trusted the residents of the county and they grew to trust me.”

Longevity with TWRA allowed Patterson to be part of tremendous change in technology and tools. He saw the addition of four-wheelers, cell phones and computer technology. “These things certainly keep employees safer and allow employees to provide customers with better service. These changes made the profession better for everyone,” stated Patterson.

When asked what he’d miss about his career, Patterson shared, “I’ll miss comradery and working with the great people of this agency. I have had terrific, dedicated coworkers. I’ll also miss talking with kids about wildlife.” Patterson’s family, as with any wildlife officer, has been supportive throughout his career. Patterson shared, “As an officer, you’re called out during family dinners, birthdays and holidays. My wife, Marla, and daughters Kyndall and Ceciley all love wildlife, and I’m most grateful for their support.”

TWRA wishes Officer Patterson happiness in retirement. The agency is grateful for his dedication to the TWRA mission.