Bluemask darter to be reintroduced into Calfkiller River 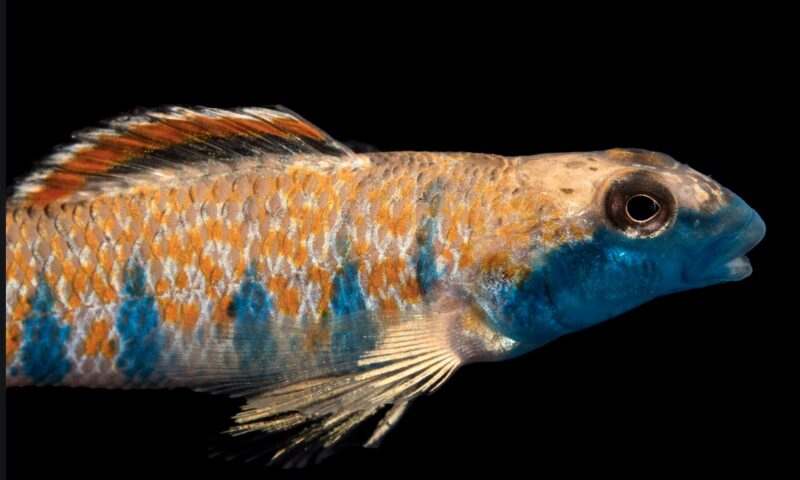 The bluemask darter was found in the Calfkiller River until the 1960s. (Photo by Joel Sartore)

The bluemask darter, a two-and-a-half inch fish with very distinct orange and blue markings, is being reintroduced into local waters in hopes of moving it from the endangered species list.

The bluemask darter is a native fish only found in the waters of the Caney Fork River system, but, because of environmental changes, the population has become even more restricted, with none of the fish being found, at all, in the Calfkiller River.

“The bluemask darter was found in the Calfkiller until the 1960s,” Patrick Rakes, with Conservation Fisheries Inc. out of Knoxville, said, “But because of dams built in the last century, possibly along with water quality, this fish has been eliminated from this portion of the Caney Fork River System.”

CFI, who has been contracted by U.S. Fish and Wildlife Services, in conjunction with Tennessee Valley Authority to begin the restoration of the bluemask darter into the Calfkiller River, claims that historic collection records report that the species of fish had previously been collected from five rivers in the Caney Fork River System: Upper Caney Fork River, Collins River, Rocky River, Calfkiller River, and Cane Creek.

“We believe that the bluemask darter was widely distributed within the Caney Fork system before the Great Falls reservoir changed their habitat in the early 1900s,” Rakes said. “They like slow current areas that provide sand for them to bury their eggs.”

According to Rake, when the bluemask eggs hatch, they are in the form of larvae less than 5 centimeters long. The larvae feed on the plankton at the bottom of the river until they reach maturity. (Plankton are the diverse collection of organisms that live in large bodies of water and are unable to swim against a current. The individual organisms constituting plankton are called plankters. They provide a crucial source of food to many small and large aquatic organisms, such as bivalves, fish and whales.)

“Water quality affects the plankton, and it is possible that poor water qualities are playing a part in the endangerment of this fish,” Rakes said.

He went on to say that CFI attempted to introduce the fish at England Cove and at Mill Creek but were not successful in keeping the small fish inhabiting those areas.

“There is not much room between Mill Creek and an apparent ‘kill zone,’” Rakes said. “We are looking into the reasons for the poor water quality in this area.”

Rakes said that CFI’s hope is to eventually be able to down-list the bluemask darter from ‘endangered’ to ‘threatened,’ but, with a life span of just three years, it isn’t going to be an easy task to get the needed hundreds of thousands of the fish swimming the Calfkiller.

“Under perfect conditions, it would take five to 10  years to repopulate the Calfkiller, but we are gong to keep at this,” he said. “We are going to keep working, keep researching, until we find what is necessary to make the conditions viable for the bluemask darter.”