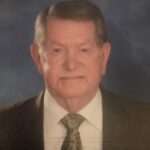 Bobby, or “B.R.” as he was commonly referred to around the golf course, was born March 16, 1938, in Winchester, to Robert Walden Rogers and Mary Ollie Armstrong Rogers.

He was a longtime sub-regional sales manager and instructor for Combine Insurance Company. Bobby was a proud veteran of the United States Air Force where he served as Air Force Police. He was a semi-pro baseball pitcher, with a career that spanned throughout his younger days, during his military service, and afterward. His love for baseball carried over into his life in Sparta as he was instrumental in the building of the Babe Ruth Field.

He was a fixture at White County High School basketball games as a season ticketholder and traveled to many away games. B.R. was an avid golfer. If he was not working, he could be found at Sparta Country Club. He served many years on the board of directors and held the office of president for several years. B.R. was a member of Cumberland Heights Church of Christ.

In addition to his parents, he was preceded in death by a sister, Katherine Martinez, and two brothers, Woodrow Wilson Rogers and Jimmy Rogers.

Funeral services will be 11 a.m., Nov. 20, 2019, at Hunter Funeral Home. Doug Downs will officiate. Burial with military honors will follow in Highland Cemetery. The family will receive friends 4-8 p.m., Nov. 19, at the funeral home.