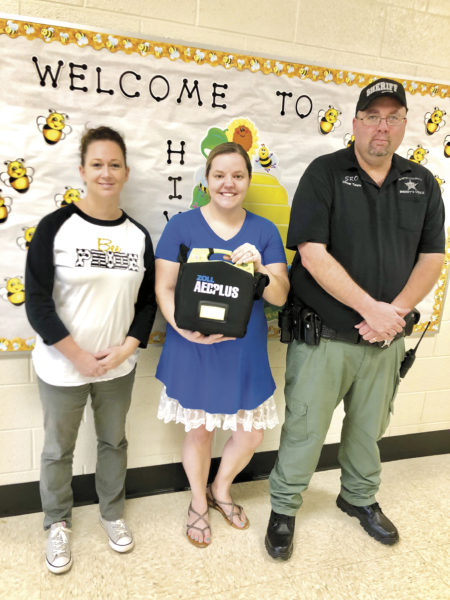 Bon De Croft Elementary and Cassville Elementary schools have received certificates that designate them as Heart Safe schools through Project ADAM, a national program that aims to prevent Sudden Cardiac Arrest deaths in children and teens.

Project ADAM (Automated Defibrillators in Adam’s Memory) was created by Patty Lemel-Clanton and Joe Lemel after the 1999 death of their son, Adam Lemel. The younger Lemel was a 17-year-old Wisconsin high school student who collapsed and died while playing basketball. Sudden Cardiac Arrest, or SCA, claimed Lemel’s life, but the use of a defibrillator, or an AED, could have saved his life.

Project ADAM is a community outreach program that works with children’s hospitals around the country. Their goal is to make AEDs, or Automated External Defibrillators, universally available to all children and teens. Monroe Carell Jr. Children’s Hospital at Vanderbilt has committed to creating an affiliate program for the Middle Tennessee area.

According to the Children’s Hospital, approximately 350,000 SCA deaths occur in the United States each year, with between 600 and 1,000 of those deaths being children and teens. They also estimate that, when you consider students, teachers, staff, and visitors, almost 20 percent of a community’s population is somewhere in its school system every day.

Monroe Carrell Jr. Children’s Hospital claims that to protect children and others in the school community, a focused effort must be made to prepare for cardiac arrest emergencies.

To become a Heart Safe school requires more than just obtaining and placing AEDs in the school, however. Administration within the school must work to create a written response plan and host practice drills. In addition, there must be a cardiac emergency response team in the building, and they must hold staff CPR/AED trainings.

While BonDeCroft and Cassville schools will receive their banners later this year, the other schools in White County are working on implementing the steps to become Heart Safe schools as well. To help, coordinated school health, a department of the White County Board of Education, has worked to secure grants that have been used to obtain 11 additional AEDs, bringing the district total to 22.

“We wanted to be sure that every student, staff member, or visitor had increased chances of survival in the event of a sudden cardiac arrest incident,” said Marcie Kinnard, coordinated school health supervisor. “There are people that have a history of cardiac problems as well as those that do not know they have a problem until they go into cardiac arrest.”