Bouldin and Lady Mocs will travel to Louisville for NCAA Tournament 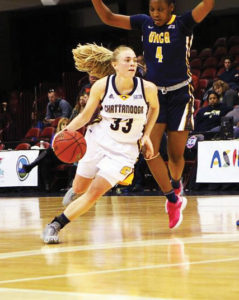 The University of Tennessee at Chattanooga women’s basketball team is headed to Louisville for the first round of the NCAA Tournament. The Mocs grabbed a 13 seed and take on the fourth-seeded Cardinals (27-7) on Saturday, March 18.

This will be the Mocs second trip to Louisville this season. UTC participated in the Naismith Memorial Hall of Fame Women’s Challenge, falling to the Cardinals 63-47 on Nov. 21. The Mocs are 5-2 all-time against Louisville.

Chattanooga (21-10) is on a six-game winning streak and will make its 15th appearance in the NCAA Tournament. The Mocs tied Mercer for its 20th Southern Conference regular season title then downed the Bears in the finals for their 18th SoCon Tournament crown.

Senior Jasmine Joyner was the SoCon Tournament Most Outstanding Player and earned the league’s Defensive Player of the Year honor in the regular season. Senior Queen Alford, juniors Chelsey Shumpert and Keiana Gilbert and freshman Lakelyn Bouldin were honored on either the regular season or tournament All-SoCon teams.