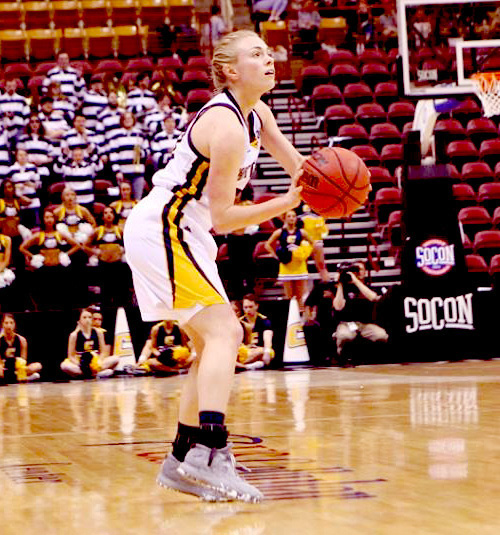 Bouldin becomes the 10th Chattanooga player to be named to the Southern Conference Coaches All-Freshman team. She ranks third on the team in scoring with 10.1 points per game and leads the Mocs with 56 3-pointers, one shy of the freshman mark set by Brooke Hand in 2005. She has hit for double digits 17 times and has made three or more from beyond the arc nine times including a career-best five at UT Martin. She is shooting 40.4 percent from the field and second on the team in accuracy from the free throw line, making 82.1 percent of her attempts.

Joyner led the balloting among the SoCon coaches for the honor and was selected to the SoCon all-conference first team. She is the only player in the league to average a double-double with 12.6 and 10.5 points per game. She recorded a league-high 13 double-doubles on the year and had eight in the last nine games down the stretch. The Southaven, Miss., senior leads the nation in blocked shots per game and total blocked shots and moved to 10th all-time on the NCAA career list with 427 rejections.

Joyner hit double figures for points 20 times this season and topped double digits for rebounding 18 times. She twice recorded nine blocked shots, a school record, and is ranked in the Top 25 for rebounding in the NCAA this season. Joyner was the 2015 SoCon Tournament MVP, is a three-time all-conference performer and a two-time all-SoCon Tournament team selection. She is a two-time National Mid-Major Player of the Week, once this season, is a three-time SoCon Player of the Month and earned seen SoCon Player of the Week nods.

Shumpert was selected to the league’s all-conference Second Team. This is her second time on the all-conference team along with her selection to the SoCon All-Freshman team in 2014. She is second on the team in scoring with 10.9 points per game and leads the Mocs with 79 assists. She ranks fourth in the SoCon for assist-turnover ratio and leads the conference in free throw percentage, making 82.7 percent of her attempts.

Alford and Gilbert were both named to the league All-Conference Third Team, a first by the conference.

Alford, a two-time ASUN selection now has her second all-conference nod from the Southern Conference. She is one of the league’s top scorers, ranking fourth for the Mocs. She topped the 20-point mark twice this season for Chattanooga with 20 at Louisville and then posting a UTC single-game high this season with 24 against Notre Dame. She averages 9.1 points per game and is shooting 40.8 percent. She ranks third on the team in 3-pointers made with 23 this season. She has amassed more than 1300 points and topped the 600 rebound mark in the Mocs’ final regular season game.

Gilbert was a member of the SoCon all-freshman team in 2015 and this marks her second all-conference selection. She is averaging 8.7 points and 4.9 rebounds per game and is second on the team in assist with 71. She leads the Mocs in minutes played and is shooting 43.4 percent from the field and 73.5 from the free throw line. She recorded a double-double in Chattanooga’s season opener at Rutgers and topped the double digit mark for scoring with 12 times.

Joyner earned first team honors in the SoCon Media poll and Shumpert was named to the second team. Alford was picked for the all-conference third team and Bouldin was named to the All-Freshman team.

Mercer’s Kahlia Lawrence was selected the SoCon Player of the Year and UNCG’s Nadine Soliman was the Freshman of the Year. UNCG head coach Trina Patterson, in her first season, earned Coach of the Year honors.

cbd oil: best cbd for arthritis how to make full spectrum cbd oil at home cbd topical pain relief where to buy cbd in ohio wellspring cbd cbd oil tincture vs capsules cbd oil penny stocks cbd 30mg pen cbd and digestion cbd 25 ppm is cbd the same as weed women fucking animals cbd 500 appetite stimulant effects of cbd vape juice does cbd oil interact with supplements we know very well who we are can cbd help with depression ae mcallister a que in english liver metabolism of drugs use of cbd oil as alternative medicine cbc ca best recipes how can i tell which cbd oil is good quality cbs who do i start products for sales can i bring cbd oil on a plane us amberry cbd oil where to buy cbd oil in easley sc best cbd beauty products

male no A Tag