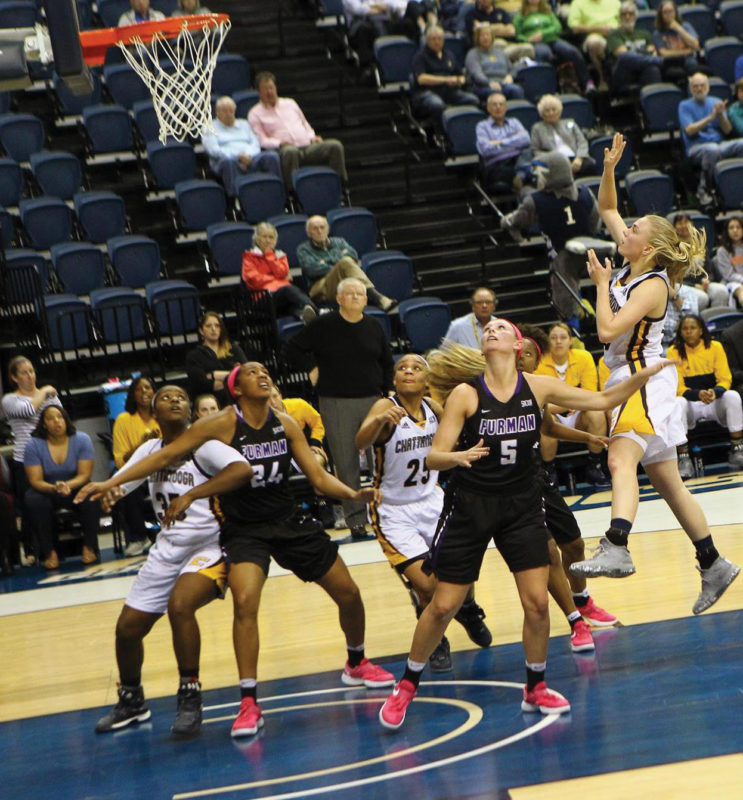 Joyner was 6-of-13 from the field and 3-of-4 from the free throw line for 15 points and 15 rebounds. It was her seventh double-double in the last eight games and a SoCon-best 12th of the season. She matched her season-high for assists with four and had four blocked shots. Joyner moves to a tie for 11th all-time in the NCAA with 425 over her career.

Junior Chelsey Shumpert (Paducah, Ky.) started the run for Chattanooga with a layup. The Mocs forced a Furman turnover on the ensuing possession and Joyner’s steal led to a layup by sophomore Nakeia Burks (Huntsville, Tenn.) to cut Furman’s lead to 15-14 at the 8:56 mark of the period.

Joyner and Shumpert combined for the Mocs’ next seven points and senior Moses Johnson (Atlanta, Ga.) capped off the run with a layup at the 3:20 mark of the frame to give UTC a 27-15 lead.

After missing seven shots and committing three turnovers, Furman broke its scoring drought with a layup from Cierra Carter with 3:01 to play until halftime to make it 27-17. A 5-4 Paladin advantage over the final 1:52 cut Chattanooga lead to 31-22 at intermission.

In the third quarter, Furman managed to get within two points of UTC, 38-36 at the 2:04 mark of the period on free throws from Cierra Carter to cap off a 14-7 scoring advantage. The Paladins got scoring from four different players in the scoring run, including a back-to-back 3-pointers from Davidson.

Freshman Lakelyn Bouldin (Spencer, Tenn.) hit back-to-back 3-pointers and scored eight of the Mocs’ next 10 points to put Chattanooga back out front by 11 points and the Mocs’ lead would never fall below double figures again.

Furman had just two field goals the rest of the game with the Mocs outscoring the Paladins 28-7 over the final 10:55 of the game.

The Mocs scored 22 points off 15 Furman turnovers compared to just three points for the Paladins on a season-low six UTC turnovers. In the paint, Chattanooga outscored Furan 36-20 in the paint and 9-2 on second chance points.

Furman was led in scoring by Cierra Carter with 15 points and six rebounds. Le’Jzae Davidson scored 13 of the Paladins’ 15 bench points making 4-of-9 from beyond the arc. Stephania Oramas had a game-high five assists and Kaitlyn Duncan had three blocked shots.