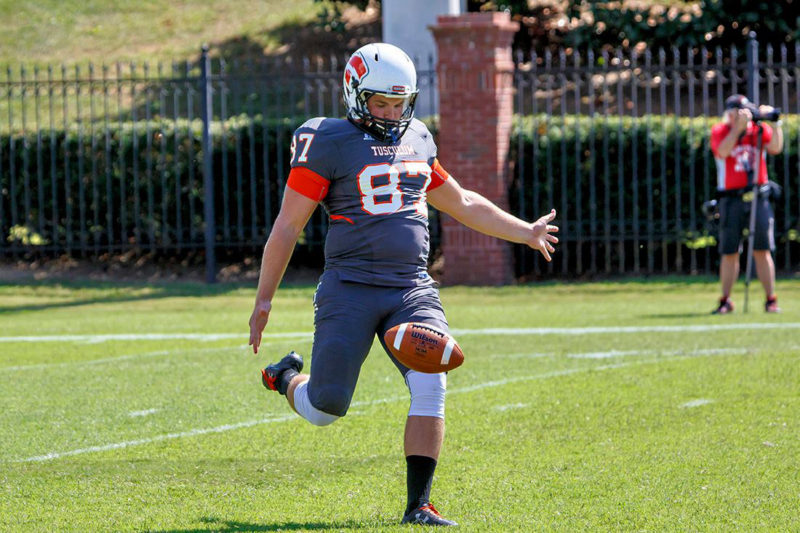 Senior Hunter Cantrell, of Sparta, has been the Pioneers’ punter for the last three years.

Tusculum’s eight total selections were tied for the third most in the conference with Catawba leading the way with 12 total picks, while Newberry was second with 10. Tusculum, Wingate and Carson-Newman were tied for third with eight honorees each, followed by Limestone (5), Mars Hill (5) and Lenoir-Rhyne (3).

Highlighting the list for Tusculum is 2016 SAC Defensive Freshman of the Year Jay Boyd, who garners first team recognition at both defensive back and return specialist. Boyd, a 6-0, 190-pound sophomore from Viera, Florida, earned Don Hansen Football Gazette All-America honorable mention recognition at the safety position last year, becoming the first TC rookie to earn All-America gridiron recognition. Boyd led the SAC with five interceptions, which were tied for the second most in school history. In his 10 games, he posted 44 tackles, including six for loss, with three pass break-ups, forced a fumble and recovered another.

On special teams, Boyd paced the Pioneers on kickoff returns, averaging a SAC-best 25.95 yards per return (37th in NCAA II), including his 95-yard return for a touchdown in Tusculum’s 38-28 road win over Catawba. His 95-yard return was the third longest in program history and for his efforts was named the SAC Special Teams Player of the Week.

Joining Boyd on the Preseason All-SAC first team is senior long snapper Ian O’Grady. O’Grady, a three-year starter on special teams, earns preseason mention for a second straight year. The Orlando, Florida native played in all 11 games where he handled all of the special team snaps where there was just one blocked kick in 109 specialty snaps. Tusculum kickers went 21-of-22 on PATs and 7-of-15 on field goals. He also recorded three tackles on specials teams.

Senior Hunter Cantrell has been the Pioneers’ punter for the last three years. The Sparta, Tennessee, product appeared in all 11 games in 2016 where he averaged 41.50 yards per punt (3rd in SAC) which is the seventh-best average by a Pioneer punter in a single-season. He made 68 punts (1st in SAC/3rd in TC history) for 2,822 yards (2nd in SAC/3rd in TC history) with 15 of those kick covering 50 yards or more yards including a season-long of 59 yards. He also placed 14 punts inside the 20-yard line.

Cantrell enters his senior season with a 38.77 career punting average which is the sixth-best in school history. His 185 career punts for 7,172 punting yards are both second in the program record book.

Running back Tony Belle played in 10 games with five starts as a true freshman in 2016. The Jacksonville, Florida sophomore rushed for 287 yards and three touchdowns in 97 attempts to average 3.0 yards per carry. He ran for a season-high 83 yards and a TD in road win at Catawba while also hauling in three receptions for 65 yards at Catawba. Belle finished the season with eight receptions for 71 yards.

Keveon Broadwater, a 6-4, 300-pound sophomore from Gaffney, South Carolina, earns a spot on the All-SAC second team. He played in all 11 games at this left tackle position last year where he graded out amongst the best on the offensive line as a true freshman and was amongst the team leaders in pancake blocks.

Colton Strickland, a 6-1, 290-pound sophomore from Naples, Florida, appeared in all 11 games where he made 29 tackles as a defensive tackle, including a season-high 10 tackles in season-finale overtime win over Carson-Newman.

Defensive lineman Britt Hasty rounds out the All-SAC second team honorees for Tusculum. The 6-3, 250-pound sophomore from Dalton, Georgia, played in 10 contests and totaled 24 tackles, including three for loss and a quarterback hurry.

The Pioneers return to campus this weekend and will begin fall practice next week in preparations for the 2017 season and the Aug. 31 opener at North Greenville.