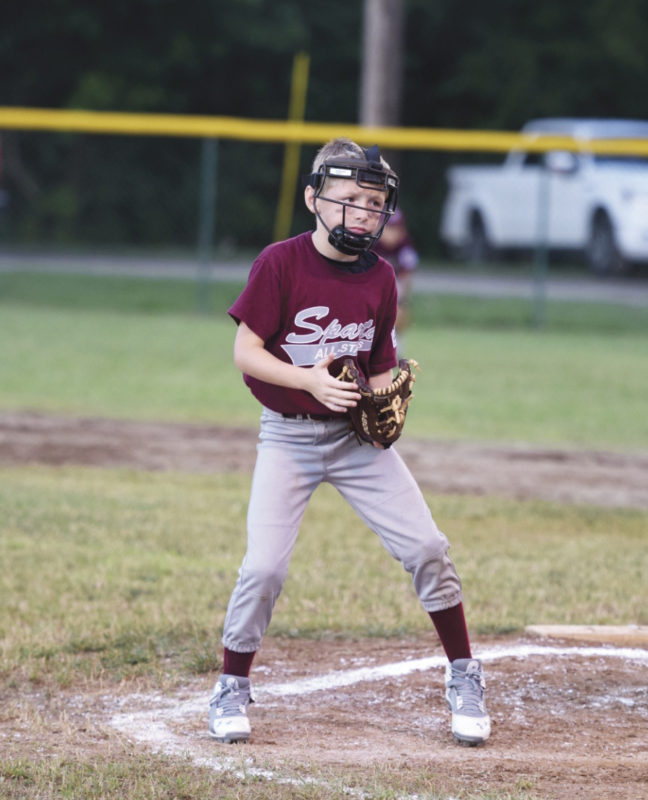 Callyn Sullivan gets ready for the ball, on Thursday night. 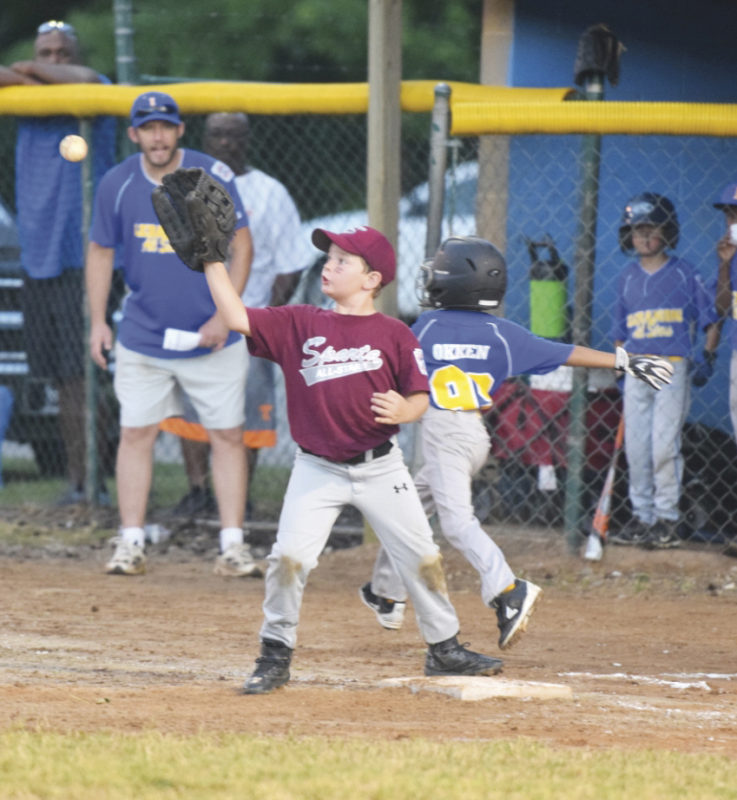 Landon Kerr gets ready for the ball at first base 7/8-year-old All-Stars.

The Sparta Little League 7/8-year-old Coach-Pitch All-Stars tournament run came to an end, on Thursday night. But like most teams don’t get to do, their season ended with a win. The All-Star team took on Lebanon All-Stars and walked away with a 7-6 walk-off victory.

With the bases loaded and one out in the bottom of the sixth inning and the Warriors down 6-5, Tucker Pinion hit a two-run double to give the Warriors the win to end their season on a high note. 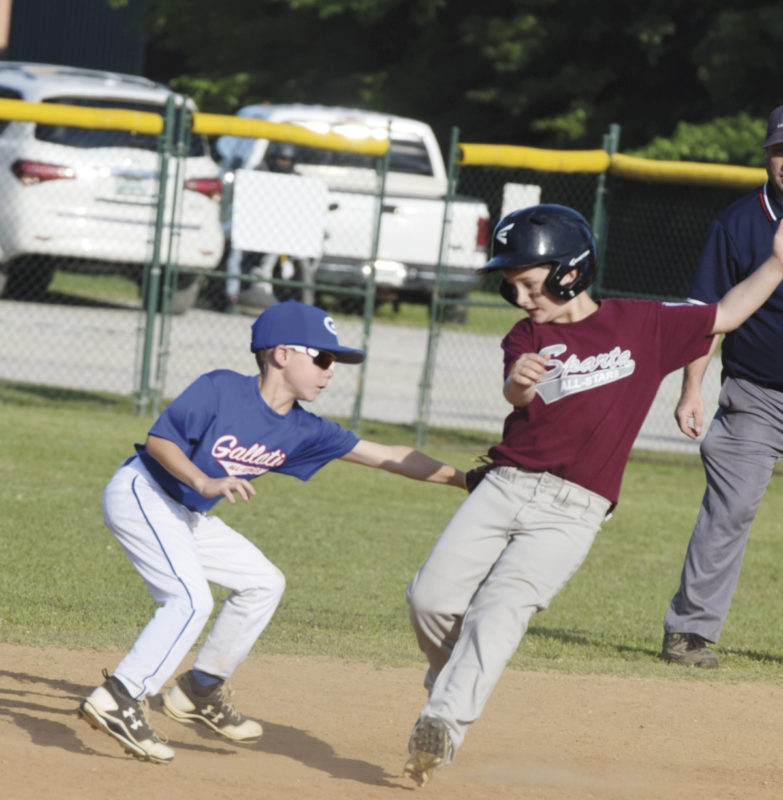 T.J. Sullivan tries to avoid the tag from a Gallatin player on Tuesday afternoon. 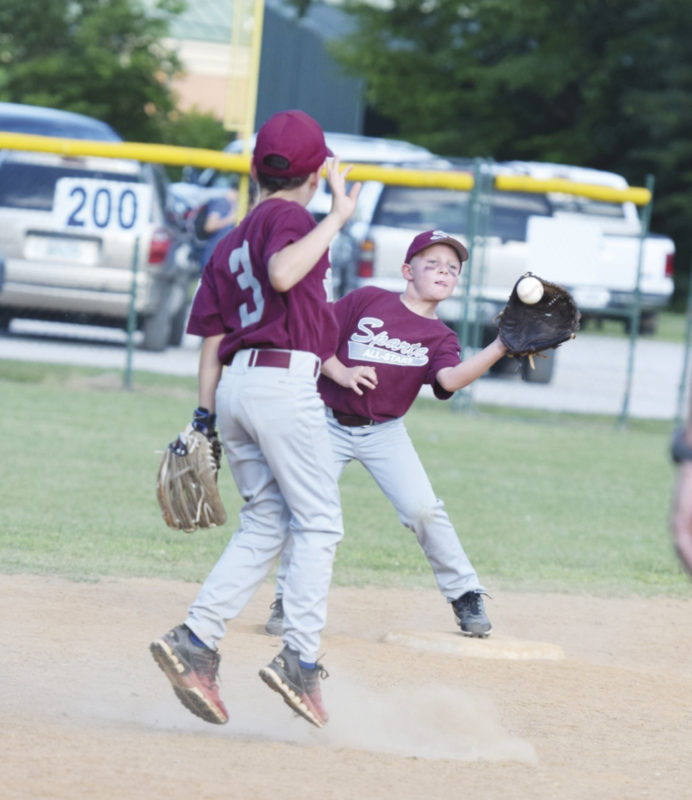 The Sparta Little League 7/8-year-old Coach Pitch All-Stars   started their All-Star tournament, in Portland, on Saturday afternoon. The All-Stars started off the tournament with a 16-5 win over the host Portland. However, the All-Stars would lose their next two games to Smith County and Gallatin. The Warriors lost to Smith County, on Monday night, 14-7, and then lost to Gallatin, on Tuesday evening, 10-2.

On Saturday afternoon, the All-Stars got the bats … CONTINUED

The White County 9-10-year-old boys’ All-Star Team traveled to Carthage, on Saturday and Monday night to take part in the week-long Little League All-Star Tournament. The tournament is formatted in a round robin format, meaning every team in the tournament will play each other once, with the top two teams at the end of it moving on to the next round. So far, the White County All-Stars are 1-1 in the tournament, with a win over Lebanon and a loss to Smith County All-Stars.

In the first game of the tournament on Saturday night, the White County All-Stars came from behind to beat the Lebanon All-Stars 10-9. On … CONTINUED

In the boys’ coach pitch league this year, there was one team that stayed on top from the beginning till the end. Premier Collision ended the regular season with a perfect 14-0 record, and then they finished off their season coming away with the tournament championship on Friday night.

Premier Collision’s opponent, Wallace Insurance, wasn’t going to let Premier come away with the championship without a fight. Wallace jumped on Premier, scoring three runs in the first inning to take a 3-0 lead at the end of one inning of play. Premier, though, would take the lead at the end of the second inning, scoring four runs and … CONTINUED

Premier took an early lead on CLS when Kyra scored for Premier in the first inning to give Premier the early 1-0 lead.

CLS, however, would answer in the bottom of the first inning scoring three runs of their own to take a 3-1 lead.

Premier would get a run back in … CONTINUED

For the third time in his 14-year career at the helm of the Golden Eagle program, head coach Matt Braga took home OVC Coach of the Year accolades after leading Tech to its ninth OVC regular season title in program history and third of his career.

The 2017 Golden Eagles wrapped up a stellar regular season with a 37-19 overall record and 23-7 mark in league play. The 23 OVC wins represent the second most in a single … CONTINUED

With little league tournaments just around the corner, Premier Collision kept its perfect record intact, with an 11-4 win over the number two team in the league, Citizens Bank, on Monday night. In the second game, on Monday, The Expositor defeated Blue Tick 16-9.

On Monday night, the two best teams in the boys’ junior league battled it out for first place. Maples Survey ended up defeating Sonic 7-6, scoring two runs in the top of the fifth inning to pull out the victory. In the second game on Monday night, Hunter Funeral Home defeated Tri-State 12-5.

Sparks Transmission and Bill Boruff battle it out on Monday

On Monday night, there was a battle in the boy’s senior league. Bill Boruff defeated Sparks Transmission 7-2. In the first game on Monday evening, Maples Survey beat WoodmenLife 20-1.

At the end of the regular season of District 6AAA baseball, the coaches got together to plan their tournament and to vote on their postseason honors.

Eight Warriors received honors from the district coaches, with five of those being named to the first team. Those five were Macon Girdley, Matt McCulley, Chris Mills, David Smith and Logan Swoape. Trenton Hodges, Jason Maxwell and Eli McDonald received honorable mention. Of the eight on the list, WCHS will get over half back next season.

Another award handed out … CONTINUED

Warriorettes finish their season going 2-2 in the district

In the opening round of the district tournament, The Warriorettes … CONTINUED

The victory not only secured the Tech squad with its ninth regular season league title, it also clinched the Golden Eagles the No. 1 seed in the OVC Tournament in two weeks. TTU will play the winning team between the No. 4 seed and No. 5 seed on Thursday, May 25 at 12:30 p.m. CT at Choccolocco Park in Oxford, Ala.

In the title clinching contest, Tech