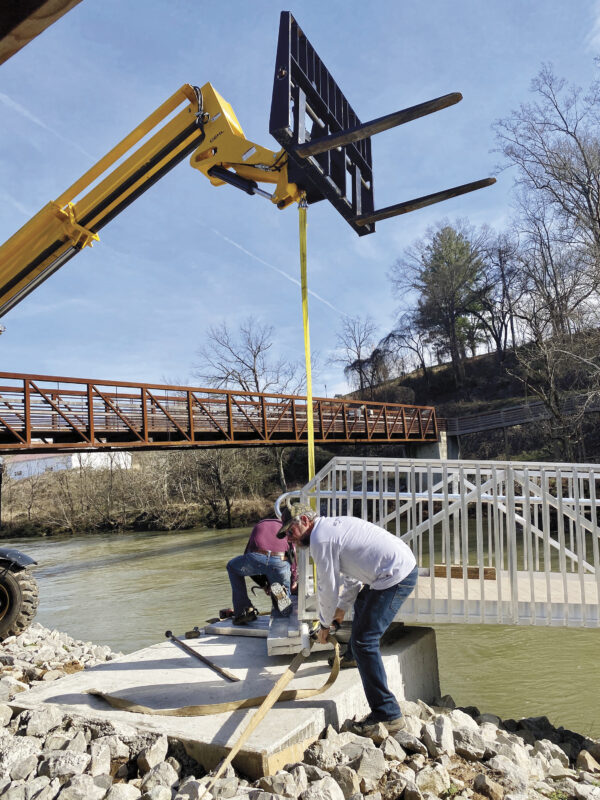 Money from a Tourism Enhancement Grant allowed City of Sparta to build and install a kayak launch dock near the walking bridge and picnic pavilion, at South Carter Street Park. (Photo by RACHEL AUBERGER)

City of Sparta has been encouraging outdoor enthusiasts to visit the downtown area, and now they have made it even more convenient to do so.

With money from a Tourism Enhancement Grant administered by the Upper Cumberland Development District, the city hired Cotten’s Marina, in Rock Island, to build and install a kayak launch dock near the walking bridge and picnic pavilion, at South Carter Street Park.

According to Greg Cotten, the dock and ramp were built off site and then moved to the ramp area on South Church Street last week.

“We transported it over here in a couple of pieces,” Cotten said as he explained that the pieces to the ramp and dock were brought to the river by trucks. “Then we finished the assembly and put it in the river using the Church Street ramp.”

The original plan was to move the dock down the river to its permanent spot over the weekend, but windy conditions, on Saturday, and elevated water levels, on Sunday, caused delays. On Jan. 13, a small barge was used to push the floating dock and ramp into position, at South Carter Street Park.

Dillard Quick, city of Sparta public works director, said that over the next couple of months, they will work to make sure the dock, which meets Americans with Disabilities Act specifications, will be accessible by boat, foot, or wheelchair.

“We will install a sidewalk to make this new dock accessible to everyone,” Quick said. “We want everyone to be able to enjoy using the river for fishing and boating.”

The city hopes that having the kayak launch dock in the middle of the downtown area will encourage kayakers to visit the growing downtown area of Sparta as well as the waterways that flow throughout the county.

The Tourism Enhancement Grant, in the amount of $42,500, was also used to add a restroom facility at the southern portion of the park near the walking trail. Both the dock and the restroom are nearing completion and should be fully operational by the beginning of March 2020 when, historically, participation in outdoor activities begins to increase.