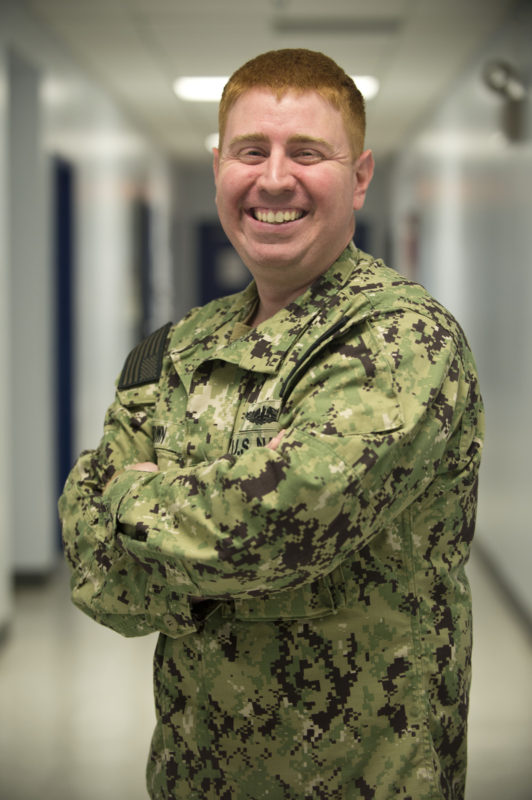 KINGS BAY, Ga. – As citizens of Cookeville go about their daily lives, members of the U.S. Navy’s “Silent Service” work beneath the ocean’s waves, continuing a tradition that only a small fraction of military members will ever know: strategic deterrence.

Chief Petty Officer Joshua Brown who hails from Cookeville, Tennessee and is a 2003 graduate of Cookeville High School takes on the task to execute one of the Defense Department’s most important mission of strategic deterrence.

Brown is stationed at the Naval Submarine Base Kings Bay, homeport to the Ohio-class ballistic-missile and guided-missile submarines. Brown serves with the Trident Training Facility.

Brown credits continued success in the Navy to many of the lessons learned in Cookeville.

“I learned to be on time,” Brown said. “If you are not early you are late.”

The Navy’s ballistic-missile submarines (SSBNs), often referred to as “boomers,” serve as a strategic deterrent by providing an undetectable platform for submarine-launched ballistic missiles, according to Jablon. They are designed specifically for stealth, extended patrols and the precise delivery of missiles if directed by the President. The Ohio-class design allows the submarines to operate for 15 or more years between major overhauls. On average, the submarines spend 77 days at sea followed by 35 days in-port for maintenance.

Guided-missile submarines (SSGNs) provide the Navy with unprecedented strike and special operation mission capabilities from a stealthy, clandestine platform, according to Jablon. Armed with tactical missiles and equipped with superior communications capabilities, SSGNs are capable of directly supporting combatant commander’s strike and Special Operations Forces (SOF) requirements. The Navy’s four guided-missile submarines, each displace 18,750 tons submerged. Each SSGN is capable of carrying 154 Tomahawk cruise missiles, plus a complement of heavyweight torpedoes to be fired through four torpedo tubes.

The first submarine was invented by Yale graduate, David Bushnell, in 1775 and provided the colonists with a secret weapon in the form of a one-man wooden craft in an experimental submarine that was nicknamed the Turtle.

Although Bushnell’s efforts were unsuccessful in attempts to blow up British vessels during the American Revolution George Washington said of the Turtle, “I then thought, and still think, that it was an effort of genius.”

U.S. submarines may not be what some have imagined. Measuring 560 feet long, 42-feet wide and weighing more than 16,500 tons, a nuclear-powered propulsion system helps push the ship through the water at more than 20 knots (23 mph).

Because of the demanding environment aboard submarines, personnel are accepted only after rigorous testing, according to Navy officials. Submariners are some of the most highly-trained and skilled people in the Navy. Regardless of their specialty, everyone has to learn how everything on the ship works and how to respond in emergencies to become “qualified in submarines” and earn the right to wear the coveted gold or silver dolphins on their uniform.

“I like this command because of the interaction with the rest of the fleet, training them, and teaching new sailors to senior sailors,” Brown said.

Serving in the Navy means Brown is part of a world that is taking on new importance in America’s focus on rebuilding military readiness, strengthening alliances and reforming business practices in support of the National Defense Strategy.

“Our priorities center on people, capabilities and processes, and will be achieved by our focus on speed, value, results and partnerships,” said Secretary of the Navy Richard V. Spencer. “Readiness, lethality and modernization are the requirements driving these priorities.”

Though there are many ways for sailors to earn distinction in their command, community, and career, Brown is most proud of when his daughter was born.

As a member of one of the U.S. Navy’s most relied upon assets, Brown and other sailors know they are part of a legacy that will last beyond their lifetimes providing the Navy the nation needs.

“Serving in the Navy is serving my country and doing a job I could never do in the civilian world,” Brown said.