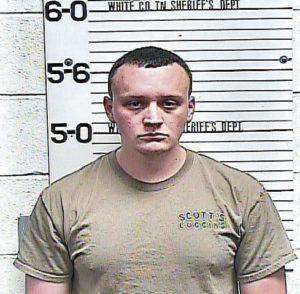 An employee with White County Sheriff’s Office has been fired after he was arrested and charged with domestic assault.

Christopher Allen Frazier, 21, who had reportedly been employed as a correction officer at the White County Justice Center, was arrested last week after a warrant was obtained by Detective Richard Lynch.

Lynch reportedly received information, on June 5, from a “third party” that a domestic incident had occurred on June 4, 2019, between Frazier and his girlfriend. The girlfriend had reportedly taken Frazier’s phone.

According to the affidavit of complaint, “during the struggle, Mr. Frazier had forced [his girlfriend] onto the couch, holding her down by the neck.”

The girlfriend reportedly stated in a recorded interview that she did go to Frazier’s residence and took his phone. She stated that a fight ensued, and Frazier reportedly held her down by her throat.

According to the affidavit of complaint, Frazier admitted to holding his girlfriend by the throat.

Cami Howard, director of administration at White County Sheriff’s Office, said Frazier has been terminated from his position.

“The arrest of Mr. Frazier is the result of an ongoing internal investigation,” said Howard. “All employees of the White County Justice Center agree to a code of ethics that requires them to be exemplary in obeying the law and respecting the rights of all. This expectation applies to their personal lives as well as their time serving this county.”