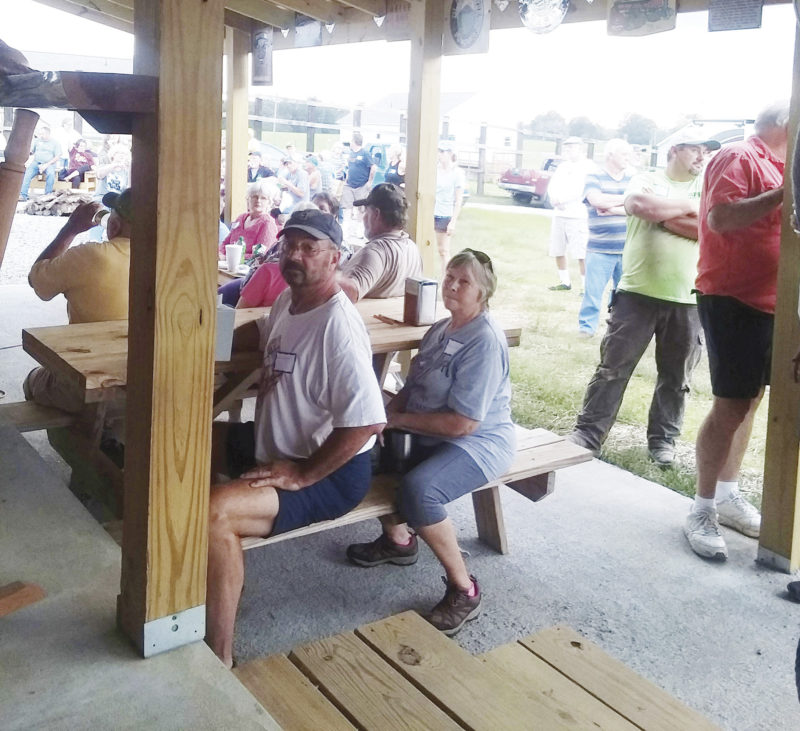 Individuals gather at Big Puckett’s Campground, on Oct. 2, to express their concerns about the closure of Cane Hollow. (Photo by RIMA AUSTIN)

U.S. Army Corps of Engineers Resource Manager Kevin Salvilla addressed a packed house at Big Puckett’s Campground, on Tuesday night, in a town-hall-type meeting to inform them of the impending closing of the Cane Hollow recreational area.

When the floor was opened for questions, members of the crowd expressed their concerns and anger at the closing.

Salvilla expressed to the crowd the closing would be temporary for the area to recoup from the abuse it has endured over the years because of off-road vehicles and littering. He stated drug use and sexual assaults were prevalent in the area as well, and the closing is important to let potential lawbreakers know their activities are not welcomed at the site anymore.

“There has been rapes and domestic assaults here,” said Salvilla. “A lot of our gang activity happens down there. This just isn’t sustainable.”

Salvilla stated the closing would involve any vehicles being driven onto the property as well as the boat ramp. He explained that anyone who puts a boat in the water at another location and would like to dock on the shore of Cane Hollow will be allowed to do so, but no motorized vehicles will be permitted on the shore.

Some boaters within the crowd expressed anger that the only recreational activity they take part in was being stripped away from them. Salvilla assured them the closing is only temporary, and the area should be opened back up to visitors within a couple of years. Members in the crowd replied with heckling at this statement, with some calling him a liar.

“The time and resources I have spent at Cane Hollow trying to clean it up compared to the other places I have to be is ridiculous,” said Salvilla.

The scheduled date for closing the area is in the spring of 2019. Salvilla explained to those in attendance they are more than welcome to submit any ideas they may have that would allow the place to remain open. He did warn the crowd, however, that he could not allow anyone in to attempt to clean the area of trash because of the hazards of used needles.

“I can’t let anyone in there to do that,” said Salvilla. “The risk of being exposed to HIV and other blood-borne diseases is too great.”

Anyone wishing to submit ideas toward keeping the Cane Hollow campground open can reach Kevin Salvilla at the U.S. Army Corps of Engineers at (931) 858-3125. There will be another town hall meeting about the same subject at Big Puckett’s Campground at 6 p.m., Oct. 16.

cbd no A Tag