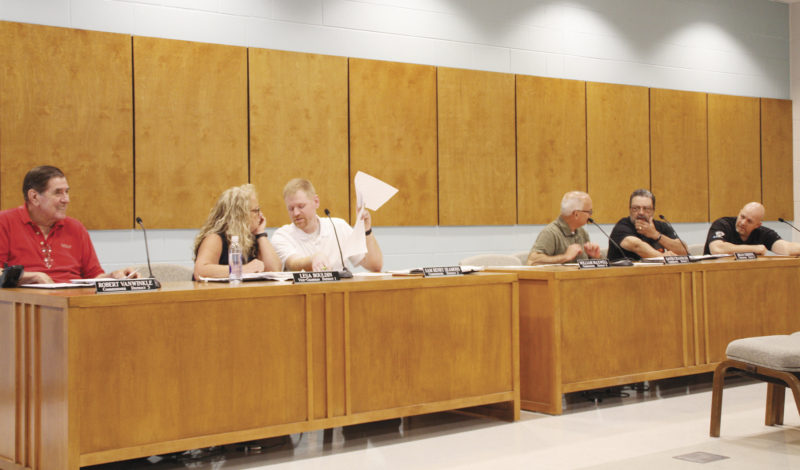 During recent discussions held by county commissioners, with the excitement of the completion of the new Van Buren County Administration Building and Justice Center Complex, the county has set a date for a communitywide open house, scheduled for June 3.

Final construction on the new county building that will house the Van Buren County Justice Center, Van Buren County Sheriff Department, the county jail, and all county government offices is nearing competition as the county commission last month approved signing off on the certificate of substantial completion for the administration portion of the new complex.

The sheriff department is working with engineers and construction crews on punch list items to get the jail portion of the justice center closer to completion and closer for the department toward moving in.

This new multipurpose building is being constructed to replace the former administration building, on College Street, that was destroyed by fire, on Jan. 7, 2015.

However, those offices are finally being reunited once again with their new permanent home.

Cumby Construction crews originally broke ground, in June 2016, to construct the state-of-the-art building, which has 52,000   square feet. This will be large enough to accommodate the space needed to centralize the various county government offices.

Uplands Design Group and J. Cumby Construction were originally awarded the bid, in May 2016, in the amount of $11.27 million, to construct the building.

Additionally, this new building will allow the county to   address its need to expand and create a new space for the Van Buren County Sheriff Department, as well as house a new multipurpose jail and a courtroom with judge’s chambers.

During the Van Buren County Board of Commissioners meeting, on May 15, discussions were held about the progress being made by the various offices that have begun the process of moving into the new administration building. Several commissioners, along with the county mayor, felt it would be best to host an open house to allow the public to see the new state-of-the-art facility that will serve the county for generations to come.

Following discussions, it was determined that the county   would host an open house 1-5 p.m., June 3, 2018. The new Van Buren County Administration Building and Justice Center   Complex is located at 121 Taft Dr., in Spencer.

Another item that was discussed Tuesday night was a recent attempt to sell 89 acres of bank-owned land that did not sell. The bank has declared that they no longer want the property and have abandoned the property.

Once under county ownership, the county will move forward with selling the property at approximately $1,000 an acre.

Other business that was also addressed by the commission included:

-Approval of surety bonds for county officials, local elected officials, and the director of schools

-Accepting a $15,000 50-50 match (in-kind contribution) grant from the Tennessee Department of Environment and Conservation for landscaping at the new administration complex

-Approval of notaries and reappointments to the county’s equalization board

The Van Buren County Board of Commissioners will hold its next meeting at 6 p.m., June 19, 2018, in the commission room of the administration complex.

male no A Tag