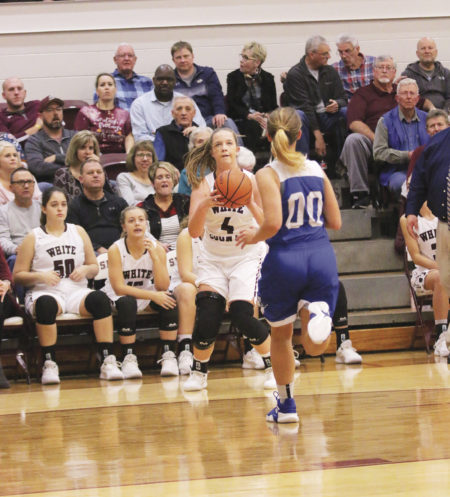 Gracie Dodgen found the goals in Roy Sewell Gymnasium much to her liking Friday night.

The sophomore went 12 of 19 from the field. Seven of those 12 makes were from three-point range where she finished seven of 13 on the way to 32 points, helping White County High School to the 65-39 win over the Red Bank Lady Lions.

Dodgen scored 15 of her 32 points in the third quarter. She made nine points from behind the arc and added three layups to give the Warriorettes a 51-31 lead, with 3:09 left in the third quarter, and then she would get taken out the rest of the quarter.

Kendreah Reeves and Kanden Reeves were the only other Warriorettes in double figures, as they tossed in 10 points each.

The game was tied twice in the first quarter, on Friday night, and the lead would change hands six different times. The Warriorettes and Lady Lions would both have leads of three points in the first quarter with the Lady Lions opening the game with a three-point lead, but a Dodgen three would tie it at three. Then the Warriorettes would lead 12-9 after a pair of free throws by Kanden Reeves made it 12-9, with 3:17 remaining. However, five straight points by Red Bank made it 14-12. The Warriorettes tied the game at 14-14 with a layup by Dodgen, but the Lady Lions would take the lead at 14-12 heading into the second quarter.

In the third quarter, the Warriorettes got the scoring from Dodgen and closed out the quarter with a 6-0 run getting a pair of offensive putbacks by Mia Murray and a layup by Kendreah Reeves making it 57-35 heading into the final quarter of play.

The Warriorettes would close out the game in the final quarter of play by opening the quarter with a pair of threes from Dodgen and a layup by Julia Curtis that gave the Warriorettes their 65-39 win.

WCHS shot 41 percent overall from the field. They were 17 of 34 on two-point attempts and made nine of 29 threes. They were four of eight from the charity stripe.

The Lady Lions shot 31 percent overall. They were nine of 30 on shots inside the arc and five of 15 on three-point attempts. They were also six of 13 from the free throw line.

The Lady Lions did hold a 38-24 rebounding advantage but committed 19 more turnovers than the Warriorettes.