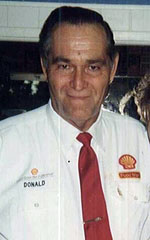 Born Friday, April 6, 1934, in Conway, South Carolina, he was the son of Frank Tompkins and Liza Jane Tompkins.

He attended Sparta First Free Will Baptist Church and worked at Shell for 25 years.

In addition to his parents, Mr. Tompkins was preceded in death by his son Jeff Tompkins; grandson, Matt Tompkins; and six brothers and one sister, Clifton, Belton, Loyd, Robert, Edward, Wendall and Gracie Tompkins.

Funeral service will be 1 p.m., July 19, 2015, at Oak Lawn Funeral Home, with burial in Oak Lawn Cemetery. Bro. Gary Farris will officiate. The family will receive friends 4-8 p.m., July 18, at the funeral home.