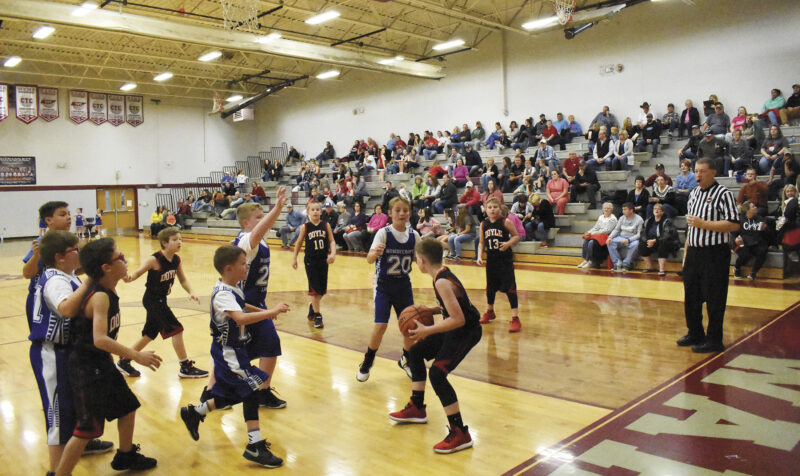 The County Elementary Basketball Tournament got underway on Nov. 18.

The boys’ teams took to the court in seeded play to begin the road to the yearly championship.  The first game of the night saw Spencer defeat Woodland Park in a thriller that had to be settled with extra time put on the clock.

Woodland Park took the early lead after one quarter by a score of 6 to 4.  At half time, Spencer closed the gap to 1 point, and, at the break, Woodland led 10-9.

In overtime, Spencer’s Levi Walker scored 6 points, and their defense held Woodland to zero points.  The final score ended with Spencer winning by a score of 45-38.

Spencer Elementary will play Findlay on Saturday in the large division championship game.

In the second game of the night Doyle defeated Bondecroft to move to the championship game to be played on Saturday against Cassville.  The last game of the evening saw Findlay defeat Northfield which puts them in the championship game on Saturday against Spencer Elementary. K. Seibers led Northfield with 6 points.  E Smith added 3 points.  Jean Taylor, J Blackburn, and H Dodd added two points each for Northfield.  Tucker Pinion led Findlay with 12 points.  Joseph Dowell added 8 points.  Jack Walker scored 3 points.  Enock Weldon, Griffin Adams, and Jieseyn Suggs added 2 points each.  The final score was Findlay 34 and Northfield 15.

The lineup for Saturday’s championship games for the boys and girls are as follows: