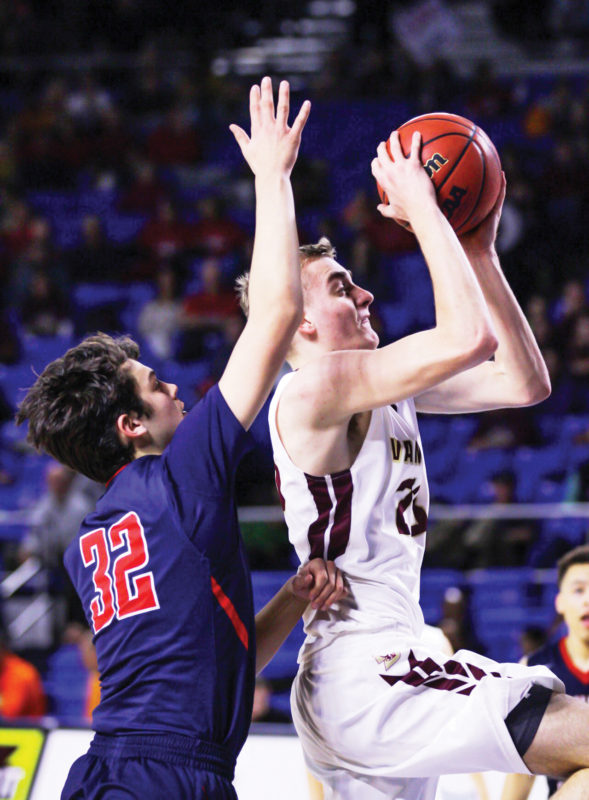 Caden Mills goes up for a layup on Thursday night. Mills finished the game with 30 points. (Photo by ANDY SOUTHARD)

The Bulldogs would start the second quarter on a 9-2 run and tie the game up at 25 apiece, with 5:14 remaining. The Eagles would retake the lead, with 4:22 remaining in the half after a pair of Caden Mills free throws at the 4:22 mark to give the Eagles the 27-26 lead. But the Bulldogs would answer with an 8-0 run to end the half and take a 34-27 lead into the locker room.

In the fourth quarter, The Bulldogs would hold a 66-51 lead, with 4:48 remaining in the quarter. Then Mills would try to get his team back in the game. Mills would score 7 straight points for the Eagles to get the lead down to 8 at 66-58, but that’s as close as the Eagles would get, as the Eagles fell 78-69.

After the game Coach, Dustin Sullivan had this to say about the game, “It’s a lot sicker feeling this time,” Sullivan explained. “The first year, it was fun. It was nice. We came in, and we did some stuff. Even if we came back next year and won the whole doggone thing, it’s still not going to make me feel better about blowing this opportunity.”

Sullivan also said, “I felt like they wanted to rebound better than us. I felt like at least four of those rebounds led to second chances. Ironically, our game plan was to out-rebound them. I had two things on the game board. On offense: rebound. On defense: rebound. I told them that if they can do that, they’d be playing tomorrow.”

With the loss, the Eagles finish their season with a 27-8 record and made it three straight trips to the state tournament.