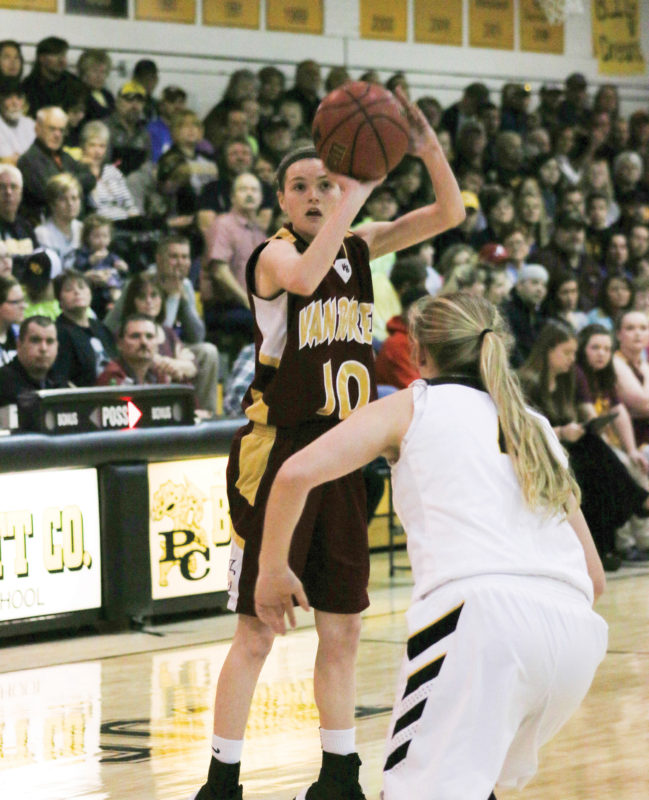 On March 4, when the Van Buren County Eaglettes traveled down to Pickett County High School, they knew they needed to play a perfect game to come away with the victory against the #2 ranked team in single A basketball.

The Eaglettes fought hard but were unable to keep pace with the Lady Bobcats on their way to a 75-40 loss, but senior Tilly Dodson was able to reach the 1,000-point milestone in her final game as an Eaglettes on her was to 23 points for the night.

In the second quarter the Eaglettes started the quarter off scoring the first 3 points of the quarter, getting a free throw from Mika Davis, and then Dodson would get her night going when she hit a layup to cut the Lady Bobcats lead to 18-10, with 6:36 remaining in the first half. Pickett County would answer back scoring the next 5 points in the quarter to extend their lead back to 23-10. The Eaglettes would answer back scoring 4 straight points, with a 3 from Dodson and a free throw from Davis to cut the lead back to 9. But Pickett County would close out the quarter on a 15-1 run to take a commanding 38-15 lead into halftime.

In the third quarter at the 5:57 mark, Dodson would get fouled on her layup attempt. She would step to the line and make the first of her two free throws. With this she would reach that magic number of 1,000. She would go on to make her second free throw. But at the 4:44 mark in the third quarter the Eaglettes would trail 50-24 and trail heading into the fourth quarter 65-26.

The Eaglettes would outscore the Lady Bobcats in the final quarter of play 14-10 but fell by a final score of 75-40.

Dodson led the way for the Eaglettes with 23 points. Christian finished with 5 points. Davis, Johnson, and Hannah Sullivan each chipped in 3 points. Lindsey Riggs finished with 2 points, and Lily Fredricks rounded out the scoring with 1 point.

After the game Head Coach Tyler Sapp had this to say about his season, “We had a season full of ups and downs, but we started playing very well when it counted. We set a goal at the beginning of the year to make it to a substate game, and we were able to accomplish that. I know all of the girls are very proud of themselves, and I am proud of them. Our seniors stepped up and were able to become leaders when they had never had to be in that situation before. That was huge for us, and I wouldn’t want any other group of girls to be my first senior class to coach.”

With the loss, the Eaglettes finished their season     with a 15-18 record. The Eaglettes will say goodbye to three graduating seniors: Tilly Dodson, Blake Denny and Lindsey Riggs.