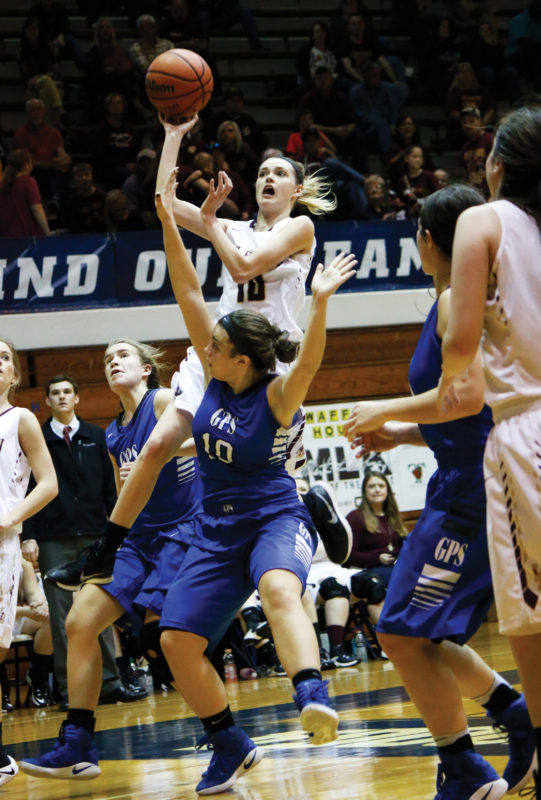 Tilly Dodson goes up for a shot over a GPS player earlier this season. Dodson finished with 30 points on Monday night and 9 points on Saturday night. (Photo by ANDY SOUTHARD)

The Eaglettes were led in scoring by Tilly Dodson who had 30 points. Mallory Christian chipped in 17 points, and Kinzie Johnson finished the game with 13 points. Lily Fredricks finished with 5 points, and Hannah Sullivan rounded out the scoring with 2 points.

At the end of one-quarter of play, on Saturday    night, the game was all knotted up at 13 all.

In the second quarter, the Eaglettes outscored Boyd 10-7 and took a slim 3-point lead into the locker room, with the score at 23-20.

In the third quarter, the Eaglettes were outscored 11-10 but held a 33-31 advantage heading into the fourth quarter.

In the final quarter of play, the Eaglettes were able to outscore Boyd-Buchanan 11-4 and secured a 44-35 win.

Mallory Christian led the Eaglettes with 20 points. Tilly Dodson finished the game with 9 points. Kinzie Johnson also chipped in 8 points. Lily Fredricks finished with 4 points, and Hannah Sullivan rounded out the scoring for the Eaglettes with 3 points.