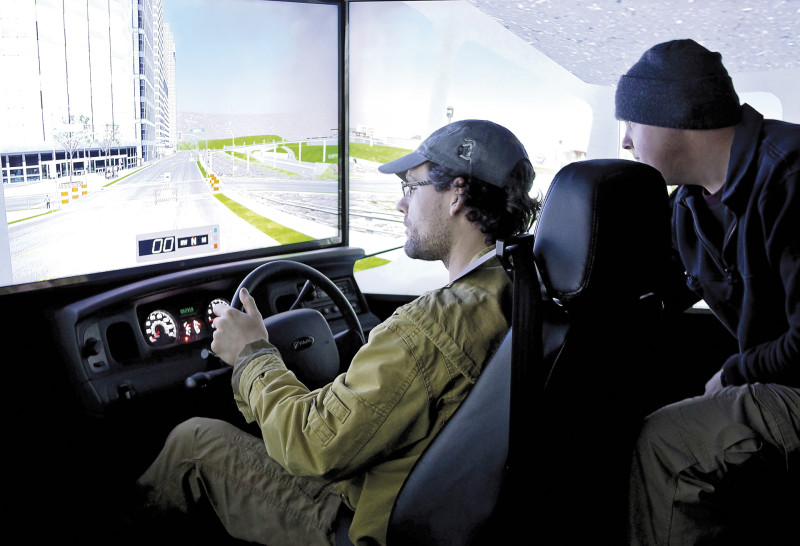 When responding to a traffic crash or fire, emergency workers drive vehicles much larger than their regular passenger car or truck, and many times at a much higher rate of speed.

While they can train to some extent in driving their department’s emergency vehicles and hold annual driver training, there are incidents that could occur in real life that volunteer emergency workers cannot prepare for in their regular training.

Driving through intersections safely, stopping for pedestrians who step out onto the road, and dodging obstructions are some of these unexpected scenarios that volunteers cannot replicate in their regular driver training that they could practice with a new emergency vehicle driving simulation that was brought to Sparta Fire Station #1, Jan. 16-17.

Approximately 30 volunteer fire and rescue personnel attended eight hours of instruction and driving in the simulator, which is housed in a large trailer that is taken to departments across the state.

After taking a short drive, the trainers could point out the different areas for improvement. Any incidents that occurred during the simulation, such as a crash, had to be completely followed through as it would be in real life, with reports filled out and radio calls to dispatch.

While the training can’t replace being behind the wheel of a real emergency vehicle, they could hone their skills and practice safe driving habits.

The simulator, which has been in service for approximately six months, is part of the Tennessee Fire Service and Codes Enforcement Academy, and travels to different departments from across the state to train their emergency workers.