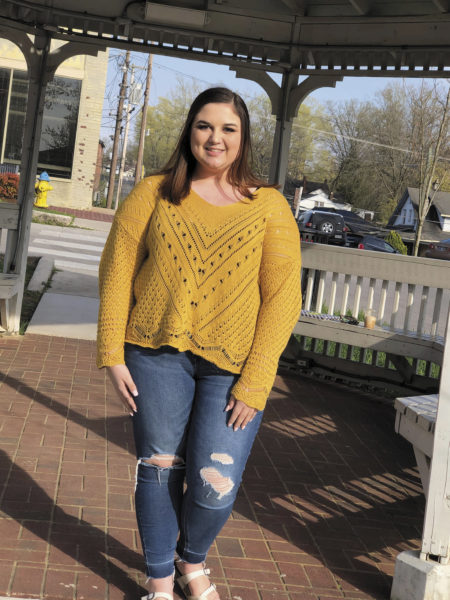 Carlyn Strianese is ready to face whatever life has in store. The teen, who attends White County High School, has battled thyroid cancer and is sending a positive message to others who face a similar diagnosis.

Birthdays are for surprises, but Carlyn Strianese wasn’t thrilled with her 16th birthday surprise: thyroid cancer.

Strianese remembers that she was celebrating her birthday with friends, in Gatlinburg, when she felt something on her neck. She originally thought it was a swollen lymph node but decided to have it checked out when it wasn’t getting any better. This started a two-month process of scans, ultrasounds, checks, and bloodwork.

“They did so many different tests trying to find out what was wrong with me,” Strianese said. “It was two months of tests and more tests.”

“They even put a tube with a camera up my nose,” she said, talking about having had a nasoendoscopy.

Eventually, a biopsy was done, and an ENT at Vanderbilt Hospital, in Nashville, gave Strianese the dreaded diagnosis: papillary thyroid cancer.

“I didn’t really feel anything when they told me,” Strianese recalled. “I don’t know if I was numb or what. I just remember thinking ‘OK, well what do we do next?’ I never really worried about ‘Oh, I have cancer.’ I just always thought I would be OK.”

According to Strianese, her mother was not as calm.

“My mom was really upset,” she said. “My whole family was pretty worried.”

It was not the family’s first experience with cancer. Strianese’s father had developed cancer when she was young. The elder Strianese lost his battle with lung cancer, despite going to Boston, his hometown, for treatments.

“They really smothered me – always checking to see if I was OK, trying to do things for me,” Strianese said about her family, including her grandmother, mother, and older brother. “I understand why now, but, at the time, it was kind of annoying. I didn’t want to be treated differently.”

In March 2017, Strianese had her thyroid, along with several clusters of cancerous cells, surgically removed. Later that same summer, she underwent radioactive iodine therapy (RAI) to destroy any thyroid tissue not removed by surgery or to get any cells that might have spread to her lymph nodes.

“The RAI was the worst,” she remembered. “I had to stay away from people for awhile because basically I was radioactive myself.”

She recalled having to stay in her room for a week and eating on paper plates with disposable utensils so that she didn’t pass the radiation on to friends or family.

“My throat hurt so bad,” she said. “I couldn’t really eat much of anything that week anyway.”

Not having a thyroid has proven a bigger challenge than actually going through the surgery and having the RAI treatment, however. Strianese said that she now has to take a hormone replacement drug to do for her body what her thyroid once did.

“It’s not the same, though,” she said. “I don’t feel like the same person I was three years ago.”

But the changes she has experienced since being diagnosed and treated successfully haven’t all been negative.

“I know that while I always thought I would be OK and while I wasn’t concerned, it WAS a big deal,” Strianese said. “I had cancer. Now I don’t.”

Strianese said that she realized some aren’t as lucky as she is, and she is making the most of every opportunity that comes her way, no matter how tired she might be.

Strianese has plans to attend the University of Tennessee next fall where she is considering international studies or possibly social work as a major.

It doesn’t matter what she chooses, Strianese knows she will succeed. She has already found there are always people to support you, people who care, people who want you to survive and be successful.

Her message to others who are facing a scary diagnosis is simple, yet inspiring.

“There’s always hope,” she said. “There’s always support – so much support. You find all these people who really care: family, friends, strangers. They’re there for you.”