Finding love in your senior years 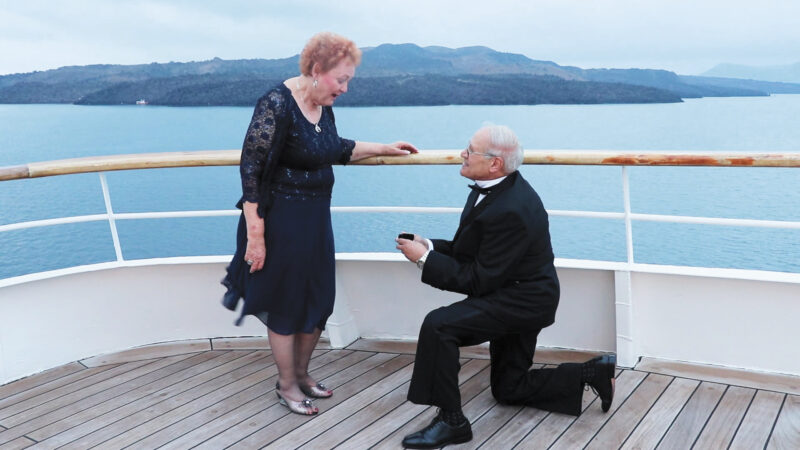 Albert Mina, who resides in Florida, set the romantic scene for his proposal to Ruby Baker, of Sparta, while onboard a cruise ship where the Aegean Sea and the island of Santorini provided the perfect backdrop. Mina dropped to one knee on the observation deck and asked for his new love’s hand in marriage.

While she shared a love of new places, exploring the roads less traveled, and lifelong learning with the 300 other passengers aboard the Aegean Odyssey, there’s one experience only Ruby Baker had.

At 73 years young, Baker got engaged on Oct. 31 while cruising around the island of Santorini on the Aegean Sea.

According to Ruby, she and her now-fiancé, Albert Mina, had met online just a few months ago and in-person for the first time just a month before the trip.

“We began talking to each other on the world wide web,” Baker laughed. “At our ages [Albert is 80], you aren’t introduced to that someone special through friends or co-workers.”

Baker is a widow who had enjoyed a long, solid marriage of 38 years, while Mina, too, had a lasting marriage of 48 years. In Albert, she found a sweet, caring man who said he would wait for her as long as it took.

Baker said when the couple first began talking, she wasn’t sure that she wanted anything more than a friendship, but he knew from the beginning that this was going to be something more.

“The chemistry was right,” Mina said. “The timing was right, and, at our ages, time is everything.”

Baker was quickly won over and realized that, in her own words, “he was a definite keeper” and found that the couple had many things in common, including their love for travel.

Baker had booked a cruise with Road Scholar, the nation’s largest not-for-profit educational travel organization for adults, months before she even began communicating with Albert.  She said she wanted an easy, stress-free vacation where she didn’t have to do anything but sit back, enjoy good company, and travel somewhere warm and beautiful.

“I want to go, too,” Mina told her when he learned of her plans and then, only half-jokingly, referenced an old dance partner term when he added, “I don’t want to lose my number!”

After booking himself onto the cruise, Mina told Baker he had a surprise, but he couldn’t keep the secret very long, and, a few days before the trip, he told her that he was planning on asking her to marry him.

“I didn’t want you to say ‘NO’,” he told Baker when explaining why he told her ahead of time about his plans.

What Mina didn’t tell her was that he had collaborated with the Road Scholar personnel and the Aegean Odyssey director and staff to create a scene that looked like it was made for the big screen. Three escorts guided the woman he hoped to make his bride to the observation deck where a violinist was there to set the tone and a photographer was on hand to be sure the happy couple would have mementos of their magical moment, and then, with the beautiful Aegean Sea and the island of Santorini as backdrop, Albert, “looking dapper in his tuxedo” (as he would later be described) got down on one knee on the observation deck and asked Ruby to marry him.

“What are the chances that a man from the land of the pharaohs finds the love of his life in the hills of Tennessee?” Mina, who was born in Cairo, Egypt, but has been in the United States for 50 years, said happily.

The hills of Tennessee are where the happy couple spent Thanksgiving this year. Mina made the trip from his home in Port Orange, Florida, to Sparta to celebrate the holiday with his bride-to-be and meet her extended family, 20 of which were there to toast the new union.

“He said he is making my family his family,” Baker smiled about their first Thanksgiving together.

While the couple isn’t quite sure where they will call home next year after the wedding, they do know this isn’t Mina’s last stay in Sparta. Their wedding, planned for March 7, 2020, will take place at Hampton’s Crossroads Baptist Church, and, while the wedding plans seem to be well underway, the honeymoon is still debatable.

“The only thing we know for sure is that we want to go somewhere warm,” Baker laughed when asked if another cruise was a possible option.

She went on to say they were blessed to have another chance at love.

Baker said, “Love in your senior years is great, and I am so glad to have found someone to share life with now.”