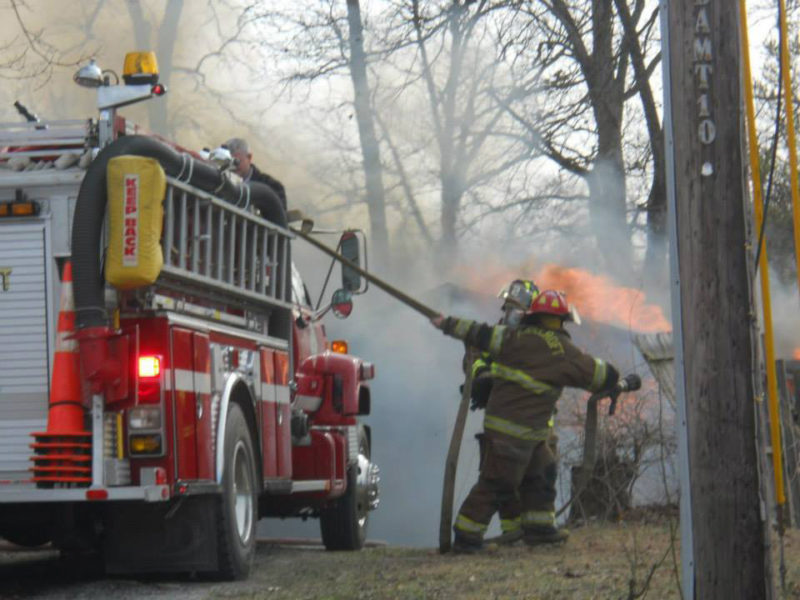 BonDeCroft Volunteer Fire Department experienced a significant increase in their ISO rating, from a 6 to a 7/7x/10. Chief Ryan Edmonds states that his department faced several challenges that led to the increase.

White County fire departments recently underwent their routine inspections by the Insurance Services Office to update their department ratings, which are used to set insurance rates for residents.

Fire departments are awarded points in each of these categories for their implementation and meeting of minimum standards.

The ratings are on a scale of one to 10, with 10 being the worst possible score.

Doyle Fire Chief Jason Sparks stated that his department was able to improve their score from a split rating to a straight 6 for their response area. The only exception to this rating are residents that are more than five road miles from the fire station, which has been given an ISO rating of 10.

Sparks credited hard work by his volunteers and an aid agreement between the South Group fire departments, which include Doyle, Central View, Mt. Gilead, and Hickory Valley volunteer fire departments for making a huge impact on his department’s ability to improve their rating.

Additionally, Sparks thanks the Town of Doyle’s board of mayor and aldermen, who he says believes in the department’s mission and works hard to ensure those protected by the Doyle Volunteer Fire Department are given the tools necessary to perform their jobs.

He also states that even though they improved their score, an increase in volunteers and water system improvements are still needed to secure adequate protection in the future.

BonDeCroft Volunteer Fire Department experienced a significant increase in their ISO rating, from a 6 to a 7/7x/10. Chief Ryan Edmonds states that his department faced several challenges that led to the increase.

“The primary issue we faced was that of a shrinking pool of able-bodied volunteers,” Edmonds. “With a lower number of members responding to calls, it decreased our equipment rating as well. The ISO requires a certain number of personnel on scene to receive full credit for certain apparatus on structure fire calls. Those outside of a five-mile radius of our station will also see a higher increase in their rating as the ISO considers homes outside of five road miles from a fire station as an ISO rating of 10.”

“Our membership numbers are low like almost every department in the county, but the automatic aid and dedication of our members allowed us to maintain our score,” Chief Matt McBride stated.

McBride also stated that a greater access to water through hydrants would be beneficial to improving their scores.

Cassville Volunteer Fire Department Assistant Chief Cody Wilson stated their largest battle was similar to departments across the country: A small membership roster arriving on scene of a structure fire, which decreases the amount of apparatus they were able to use.

“If we had enough personnel available on the first alarm from our department we would have been able to utilize our tankers as part of our water assessment,” said Wilson. “However, due to inadequate staffing only those homes within five road miles and 1,000 feet of a fire hydrant received a rating of 6 while those outside resulted in a rating of 10.”

Cherry Creek Volunteer Fire Department also maintained their score. Chief Chris Brewington cited the same personnel issues as the reason they were not able to improve their rating.

McCulley reported that adding substations would allow the department to better serve their community.

“The addition of substations would allow more homes and businesses to receive the best rating possible for our department,” McCulley said. “Cost associated with land and developing that land is the hurdle we face to improve that portion of the rating scale.”

Chief Tyler Brandes stated that his members’ hard work and dedication in responding and training, improved tracking of paperwork, better 911 and dispatch services, as well as the South Group aid program, were key factors in a better rating.

Brandes stated, “The residents of Hickory Valley support their fire department, and that helps our members want to work harder to protect their neighbors.”

Brandes also explained that the volunteer shortage would continue to grow, as, “The majority of the volunteers in White County are over the age of 50 and will be retiring in the coming years.”

Additionally, funding is a problem for the fire departments, Brandes said.

“Another hurdle is the cost of equipment and lack of funding,” said Brandes. “The county budget for each department is adequate for maintaining the doors to be open, but doesn’t allow for departments to improve their equipment or purchase new gear. The allocation of equipment falls upon each department to hold fundraisers – the same people already constrained with their homes, their jobs and emergency calls.”

Sparta Fire Department was not due for its inspection in 2016 and therefore has not yet received an updated ISO rating.

Mt. Gilead and Eastland volunteer fire departments were not inspected by ISO.

White County’s fire departments are staffed completely by volunteers, who spend many hours training and responding to emergencies.

face mask: papr or n95 mask monster face mask best respirator mask for grinding glass xl dust mask the respirator that would be used where dust or solid particles might be inhaled is a no cartridge face masks for spraying n95 respirator size nutrical safe for puupy with coronavirus face masks after leaving hospital top rated dust mask for woodworking what is the best lush face mask purple cushions amazon why wear a mask when your face is oh so beautiful motocross goggle with face shield coronavirus oc43 droplet when to use a n95 mask 3m face mask 6002 where to find liquid smoke in walmart 3m respirator dust mask 3m 9502 mask how to