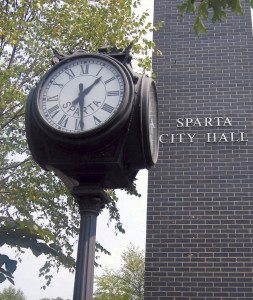 An ordinance allowing for special event beer permits within the City of Sparta has only recently been approved by the Sparta Board of Mayor and Aldermen, but the first application for a permit has already been received and was approved during the Aug. 18, 2016, city board meeting.

Don Sergio appeared before the board, representing Calfkiller Brewing Company, to ask for the board’s approval of a special event beer permit to serve beer at the Sparta Green Market, on Aug. 19.

Sparta Police Chief Jeff Guth explained to the board that the applicants, Don Sergio and Dave Sergio, had passed a criminal background check.

Sergio stated they would be set up in a roped off area just outside the pavilion where the vendors are located.

Guth said he had confirmed that Sergio would have someone checking identification cards to ensure those entering the area are over age 21 and that drinkers would not leave the confines of the serving area with drinks, as an open container ordinance within the city prevents drinking alcohol in public areas.

“This is new territory for all of us,” Guth stated. “So we’ll be happy to answer any questions you might have.”

Alderman Bobby Officer impressed upon Sergio that he is responsible for ensuring that no beer will be sold to minors and asked what procedures he has in place to ensure that minors do not have access to alcohol during the event.

“We are going to limit access to the beer garden-the roped off section-to one entrance and one exit-the same one. We have two guys at the door both checking IDs ad everybody is going to have their eyes open to make sure that no one escapes with said beer. But I do believe that-I don’t anticipate a problem-but we’re going to have our eyes open for it. And the guy that I have lined up to do it is a big formidable guy. You don’t want to mess with this guy. And he’s a responsible citizen,” Sergio explained.

Alderman Hoyt Jones asked Sergio if he had talked to the other vendors to see how they felt about beer being served at the event.

“I have not,” he said. “But at the past Green Markets, everybody that I’ve talked to that was a vendor wondered, ‘why aren’t you guys over here?’ In the past we set up behind [The Fragrant Mushroom] and just gave beer away, because that’s just what we did in the past. I guess that’s why all this came about because it would be nice to have beer at whatever event there was. So I think most people, to my knowledge, are behind it. And we will do everything we can to make sure it is respectable and that nobody gets stupid, so to speak.”

Jones responded said that is important.

“It’s important to us too, especially since I’m responsible for it,” Sergio stated.

Guth said Sparta Police officers would go by to check out the area to ensure it is set up according to the permit.

“We will be patrolling the area to make sure nobody sneaks out and does what they’re not supposed to,” Guth stated. “We’re not going to hound them or anything like that, but we will be in the area.”

The board unanimously approved the application to allow Calfkiller Brewing Company to serve beer at the Green Market, on Aug. 19.

“This is the first one, make it run smooth,” Mayor Jeff Young instructed.

Also discussed was a request by the Sparta Rotary Club to install 25-foot decorative signs on Highway 111, at the northern and southern city limits, welcoming people to the community. The club has offered to bear the entire cost of the signs, but because Highway 111 is a state roadway, the project must go through the Tennessee Department of Transportation. The Rotary Club requested that the city act as the liaison between the club and TDOT.

The signs, which will be illuminated at night, are tentatively planned to be located near Winding Lane and near the exit for the drive-in theater.

“It’s my recommendation at this point in time that we work with the Rotary Club on doing this,” Young stated. “I think they’ve set a pretty outstanding precedence with the Veterans Park that they worked with us on across from Main Street. They did an outstanding job. They took the lead on it and we were in a supporting position.”

The board unanimously approved the project.

-Alderman Jim Floyd was appointed vice mayor, taking the place of Robert Verble, who did not seek re-election this year.

-Dr. Chad Griffin and Judy Parker Payne, who won re-election to their positions as aldermen, and Jerry Lowery, who was elected for his first term as alderman, were sworn in.

The next meeting of the Sparta Board of Mayor and Aldermen will be Sept. 1, at Sparta City Hall.