Haystak: Live at the Venue 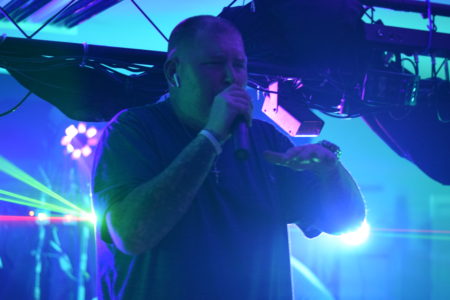 Music and fans flooded The Venue in Cookeville, Tennessee, August 25. What was meant to be a small-town memorial concert in Sparta, evolved to a prodigious party in Cookeville that housed many bands and artists. Of course, the main attraction everyone was waiting for was the one and only HAYSTAK. The crowd anxiously anticipated the performances of Haystak, Static G with DJ Kr8kutz (all members of Rhymsick Entertainment – Official music label since 4/20/16) and Yung Kleff.

The show was hosted by Freakshow Entertainment’s Bubba and TJ. They kicked off the event around 4PM. Local Sparta band, Faces of Death, took the stage first. They opened with an original called “Death March”. The night was off to a promising start as the band’s upbeat music and painted faces captivated the crowd. The Ostrich Primer then followed in the line-up with a series of original songs. His song, “The Key”, featured one of the night’s headlining performers, Yung Kleff. 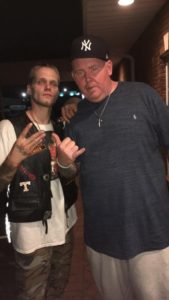 Additional entertainers featured at the event includes Assault Squad, opening with their top hit, “Squad”, and a young fellow straight out of Knoxville that goes by the name Quez. The fans were stunned as this local rapper began his set. Quez opened with a couple of originals entitled “I Do This E.Y.E.” and “Ballin’”. The final local band mentioned is often referred to as the God Fathers of Cookeville. They are more formally known as Cartel Fam with Money Lane. Jay Paul, SOS and Pimp Daddy are all local residents of Cookeville. They have recently been touring with Juvenile and Nappy Roots. After performing at the Venue, these guys can expect to have an increase in their fan numbers. Catch them next September 28th in Atlanta, Georgia at Club After Party.

Many other bands and artists came out to represent their own sound at this social gathering. Though the crowd was intrigued by them all, the anticipation for the leading performances grew uncontrollably. Therefore, the next performer to take the stage was not a local artist. He is a resident of Dixon, Tennessee that goes by the name Hillbilly. Hillbilly performs with his wife, Fefe. He has been on two National tours, opened for favored artists including Lil Wyte and Jelly Roll, and is currently in the making of a Christian Rap album. Hillbilly was immediately relished by the crowd when he opened his set with an original song titled, “So Far Away”.

Following the performance of Hillbilly was the talented new up and comer, Luii V. Luii also opened with an original rap that was titled, “Squad”. Beginning his career through BYOB Battle raps, Luii V can now be seen opening for Cardi B, The Migos, Waka Flaka, Project Pat, and many more known musicians. You can see him and hear his new Spanish track next at Summer Sauces with Vinchinzo and others September 8th.

Later at The Venue, the moment everyone was waiting for had not yet arrived. The crowd began to question, where is Haystak? Freakshow Entertainment took this time to interact with the guests and to remind them of the real reason for gathering; To honor and remember a young man that went by the name of Chubbs. Chubbs, who passed away last year, is the brother of rap artist, Yung Kleff. The crowd knew once Yung Kleff made it to the stage, it was going to be a performance of passion, love and celebration for his brother. The time was closing in on midnight, and that moment finally came. 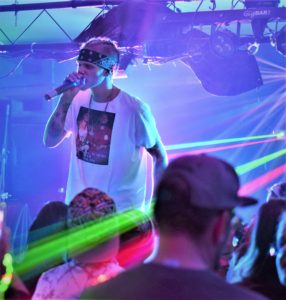 For those who do not know him, Yung Kleff is a rapper out of Sparta. At the age of nineteen, he found his true calling as a rap artist. For many years now, he has dedicated himself to his music and fans. He is currently on tour, opening for artists such as 369 Mafia (Jonesboro, Arkansas, September 15) Lil Wyte (Lawrence, Kansas, October 5), Afroman, and many more. With the passing of his brother, Yung Kleff decided that the best way to honor him would be through an awe-inspiring concert.

Taking to the stage at The Venue with his first song, “Davie Crocket”, many got to experience this devotion first-hand. The crowd was not the only ones enjoying Kleff’s set. Rhymsick Entertainment’s CEO and rap artist, Statik G (sporting his signature pink hair) was blown away by his talent. By the end of the night, Yung Kleff was signed to Statik’s label.

This label is also the new home of rap legend, Haystak. The crowd exploded with excitement when Stak hit the stage. Alongside of him was Yung Kleff, Static G and Young T (an up and coming artist). Haystak did not disappoint as he opened his performance with the song, “Country Boy”, featuring Young T. Haystak then proceeded to go back and forth between old hits, such as “Bonnie and Clyde” and “Hard to Love”, on into tracks from his newest album, Haywire. 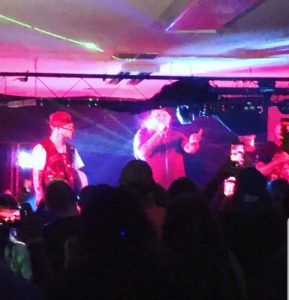 The remaining time of the early morning was filled with shared performances by Statik G, Yung Kleff and Haystak. They held the crowd’s unbreakable attention until the very last song. It was closing time and though most of the crowd had disbursed, many payed extra to stay for the meet and greet. Haystak, Statik G, Yung Kleff and many of the other performers shook hands, took pictures and signed merchandise for the remaining fans. It was at this time that I was able to sit down with Haystak and the others from Rymsick Entertainment for exclusive interviews. Throughout every interview, each performer took time to give credit to God, family and fans for their success. They also expressed the difficulties between being on the road and away from their children and loved ones. In addition, they conveyed their musical inspirations (such as 2 Pac, Ice Cube, etc) and the sacrifice it takes to “make it big” in the music industry. I asked Haystak if there was any advice he could pass on to upcoming artists who dream to one day be in his position. He answered back by stating,

“Be humble. Relate to your fans. The music you put out has to make people feel something. If they are not feeling it, they will not listen to it. It’s a struggle. There is a lot of risk but if music is something you are feeling, then you got to go with it”.

Overall, the evening was a smashing success. Fans and performers alike were satisfied with the overall event. Whether you were there to honor Chubbs, support one of the local bands, or to get ten seconds of star time with the legendary Haystak, everyone can say that The Venue housed an amazing show.

Photos by: GJ with Next Level Producations