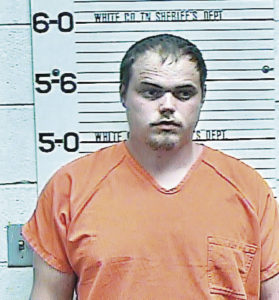 A Sparta man has been convicted of soliciting a minor to engage in the act of aggravated sexual battery after the testimony of a 13-year-old girl.

Austin Andrew Hodge was found guilty of the aforementioned charge when he appeared before Criminal Court Judge David Patterson, on April 30, 2019, according to Bruce MacLeod, assistant district attorney general for the 13th Judicial District who prosecuted the case.

MacLeod said the jury deliberated approximately six minutes before finding the defendant guilty. In addition to the teen’s testimony, a video of the defendant “talking about the crime” assisted in obtaining the guilty verdict, according to MacLeod.

On behalf of District Attorney General Bryant Dunaway’s office, MacLeod said he wanted to recognize the hard work of Detective Travis Barker, of Sparta Police Department, and the tireless efforts of the family members involved in the case.

“Without those individuals and the help they provided, justice would have not been possible,” said MacLeod. “The district attorney’s office takes very seriously crimes that put children in harm’s way. Holding those accountable who victimize our children will always be of the highest priority.”

Hodge was taken into custody immediately following the conviction where he will remain, pending a sentencing hearing.