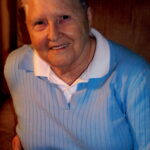 She was a retired cashier, having worked at several grocery stores, in Cookeville. She was a member of Caney Fork Baptist Church.

Pallbearers were family and friends.

Memorial contributions may be made to St. Jude Children’s Research Hospital @ www.stjude.org

Hooper Huddleston & Horner Funeral Home, in Cookeville, was in charge of arrangements.