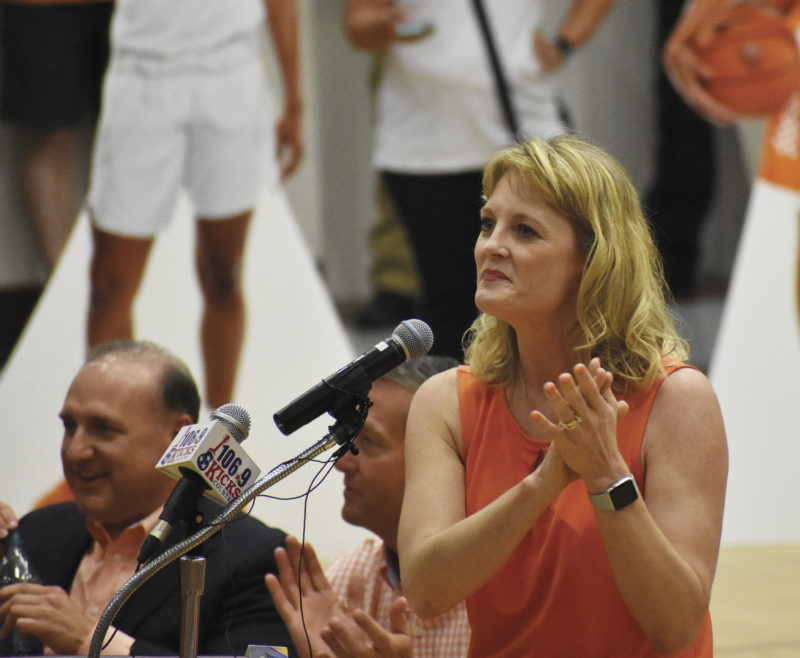 Kellie Jolly Harper shows her appreciation by leading a round of applause for her fans who attended the Welcome Home event held June 6, at White County High School. (Photo by JERRY LOWERY)

Since the naming of Sparta’s hometown Kellie Jolly Harper the new coach of the University of Tennessee Lady Vols, the fans in Sparta have been excited.

On June 6, fans had an opportunity to show their support and love for Harper.  The Summer of Smokey Tour was held at the White County High School gym where Harper played during her tenure at WCHS.

“I have spent many hours in this gym,” said Harper.

So it was fitting that the Sparta fans came out in force to be able to talk, hug, share stories, laugh, and listen with Harper as she was honored for her accomplishments. Harper’s message to the fans was,“ Work hard, be dedicated, and do things the right way.”

City, county, and state officials were on hand to present Harper with various gifts and proclamation. 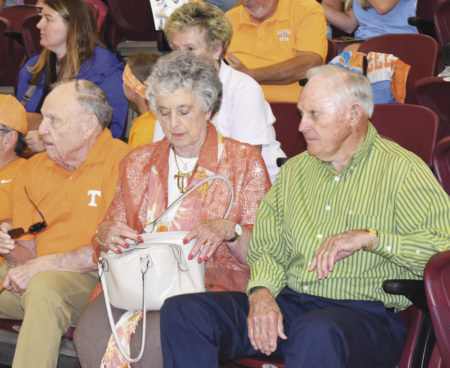 L-R: Bill Johnson, of Sparta, former banker who was a star football player at the University of Tennessee, shows his support for Kellie Jolly Harper during the recent Welcome Home event. Seated next to Johnson is his wife, Rena, and Kenneth Broyles, former standout football player at Tennessee Tech. (Photo by JERRY LOWERY)

State Senator Paul Bailey, of White County, presented a proclamation from the State of Tennessee and also a state flag that has flown over the capitol.  He also presented Harper with an official Coach Pat Summitt orange legislative “Blue Book” that was made to honor Summitt. Summitt was the former Lady Vols’ coach for whom Harper played during her tenure at the University of Tennessee. Summitt was also a great mentor to Harper. Summitt passed away, in June 2016, after a battle with Alzheimer’s.

City of Sparta Mayor Jeff Young moved Harper’s emotions when he presented her with a “Key to the City” in her honor.

“I don’t know what doors it will open, but I am excited to have it, and it is an honor to receive,” said Harper. 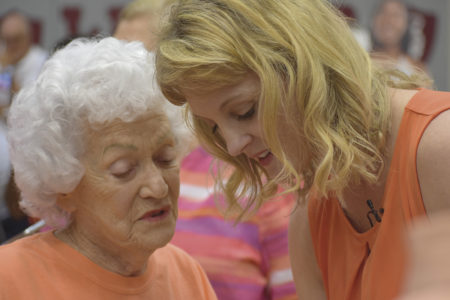 Pinkie Tubb Hill, 95, is an avid basketball fan and has had season tickets to all of White County High School’s basketball games for decades. Hill, who has been a great supporter of Harper throughout the years, shares a few moments with the new Lady Vols coach. See more photos on 4B. (Photo by JERRY LOWERY)

When Director of Schools Kurt Dronebarger stepped to the podium, Harper once again had her emotions touched when he announced that the gym floor at the new Findlay Elementary School would be named after Harper for her playing days in elementary school.  “Kellie’s Court” will be the official name of the gym floor, and Harper was visibly surprised and moved by this announcement. She said having a court named after her was “really special.”

“That’s where I got my start – at Findlay Elementary – so it’s really cool,” said Harper. “This is a great place to grow up, a great place to live. Great people here. I’d heard they were wanting to try to do something really special, and they did. They hit a home run.”

Harper then took some questions from the audience. After a press conference, Harper spent more time signing autographs and sharing with friends and family.