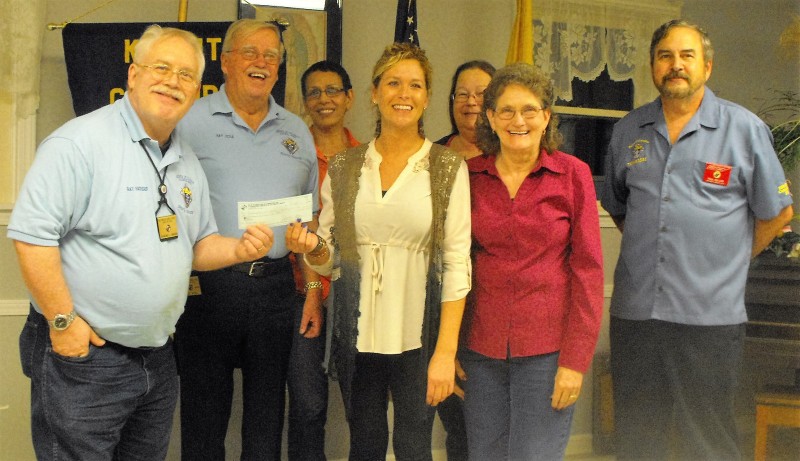 The Knights of Columbus Chapter 14902, from St. Andrew Catholic Church, sponsored their annual “Campaign for People with Intellectual Disabilities” Fund Drive on Oct. 16 and 17. This program, which is often referred to as the “Tootsie Roll Drive,” has been in existence since 1970. Knights, their spouses and representatives from Pacesetters handed out free Tootsie Rolls at Floyd’s Cash Saver, Walgreens, Save-A-Lot and Piggly Wiggly. We would like to thank these businesses for their support, as well as those who contributed to this worthwhile cause. All donations received are used to fund the Knights’ programs geared toward improving the quality of life for people with disabilities.

Fifty percent of funds raised stay in the local community, with the remaining 50 percent used to help fund international charitable causes. Two thousand dollars was raised during this year’s event. On Nov. 18, 2015, the Knights presented White County Pacesetter Director Cathy Presley with a check for $1,000 to support improvements to their facility and programs. Since the establishment of local Council 14902, in 2009, the Knights have donated more than $4,500 to Pacesetters. Additionally, in 2012, Pacesetters received an $18,000 grant from the Knights of Columbus Supreme to help purchase new vans.

This past summer, the Knights of Columbus International donated $1.4 million dollars in support of the 2015 Special Olympics held in Los Angeles. This donation covered the cost of food, transportation and entertainment for every athlete from the United States and Canada during their time in Los Angeles. According to Supreme Commander Carl Anderson, “Our support exemplifies our commitment to the dignity of every person, our dedication to assisting with our neighbors’ needs, whatever they may be, and our deep appreciation for the great work done by Special Olympics.”

The Knights of Columbus is the largest Catholic Fraternal Service organization, with 1.7 million members worldwide. For more information about the Knights, visit www.kofc.org.