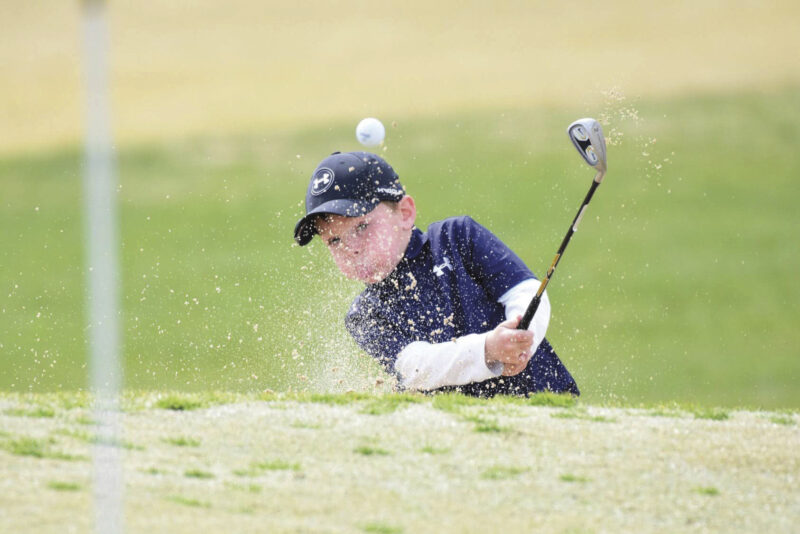 Landry Moses, 6, is showing off his golfing skills. The elementary school student is headed to the “big time” this fall.

Most first graders think about recess and playing with their friends, but Landry Moses, a first grader at Capshaw Elementary School, can’t stop thinking about golf and that focus has earned him an invitation to the U.S. Kids Regional Golf Tournament, in Port St. Lucie, Florida, this fall. 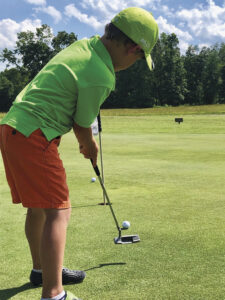 Landry, who turned 6 just a few weeks ago, has been playing golf since he was 4 and promptly went on to win the Putnam County Junior League two years in a row. This past spring, he played in the Sneds Tournament Tour and won first place in four tournaments. He also participated in the U.S. Kids Tour, in Nashville, winning five tournaments. After shooting his two best rounds at the Carolina State tournament, in Pinehurst, North Carolina, Landry received a priority invitation to play in the U.S. Kids Regional tournament this fall.

All of these wins didn’t come without work. Landry said he practices at least two to three hours, four times a week. His practice routine includes spending time on the range at Southern Hills Country Club, hitting golf balls with each of his clubs before playing through nine holes. Landry said he finishes his practice sessions working on chipping and putting.

The regional tournament, in October, will draw players from all over the country as well as a few players from South America. They will all be hoping to have the tournament of their lives in order to receive an invitation to play at the World Championships next July.

“My goal is to place in the top 10,” Landry said. “If I do, we get to go celebrate at Tiger Woods’ restaurant that is close to the course.”

He said while he really likes to watch Tiger Woods and he knows that Jack Nicklaus was the greatest golfer ever, winning 18 majors, his favorite golfer is Rickie Fowler.

When he isn’t playing golf or practicing golf or watching golf on television, Landry is thinking about golf.

“I think about it when I’m at school, and I want to talk to my friends about it, but they don’t understand,” he said. “I have one friend at school who plays golf, too. I try to find him so we can talk about golf.”

Landry promised he doesn’t let all his golf thoughts get in the way of his studies, though. He knows he has to study hard and be a good student to have a future in the sport he loves.

“All the great golfers went to college, and to go to college you have to have good grades,” he said, showing that golf is still on his mind.

Moses’s parents, who both have served as caddy at different tournaments, see golf as a great thing for the young player.

“Golf teaches so much,” his father, Ron Moses, said. “It teaches self-discipline, the value of hard work and maybe, most importantly, personal forgiveness. It teaches him to move on after making a mistake.”

The elder Moses said the family will support Landry as long as he wants to play. And, according to the first grader, that is going to be for a long time to come.

“I’m going to grow up and play in the majors,” he said, before laughing and adding, “I’m going to win 20 majors.”

For now though, he will have to keep focusing on practicing and preparing for his big trip to Florida and the U.S. Kids Regional.