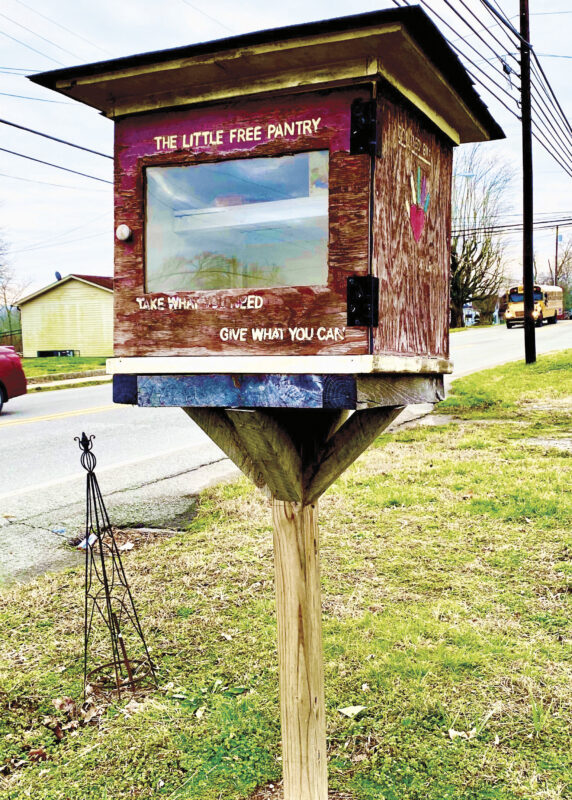 Little Free Pantries, such as the one pictured above, can be found at a few locations in White County.

February is National Canned Food Month, and White County has a unique way for its residents to participate in this obscure observance.

There are three Little Free Pantries throughout the county: Cherry Creek Fire Department, Highway 84 near the entrance to Zile Trailer Park, and on North Spring Street at Reflections Salon. The pantries were constructed approximately two years ago and are stocked completely by volunteers or members of the community who wish to fill a need for families who may be hungry and without other resources to secure an adequate amount of food.

“We noticed there was a need for people to have access to a pantry,” Jennifer Robinson said about the beginnings of the Little Free Pantries. “Most of the pantries in the area are run by churches and are only open during the day when some families are working.”

Robinson said that she and some friends saw that it was difficult for individuals who were trying to support their families and just didn’t have enough resources to go around or had fallen into a difficult time for a season to get the help they needed.

“I saw an article about a woman who had started a free pantry in her neighborhood and had a Facebook page devoted to it,” Robinson commented. “I put up a page for us in White County (The Little Free Pantry Network of White County TN) to see if anyone would be interested in starting/building one, and people responded.”

The pantries are stocked on a volunteer basis and are usually stocked with canned or dry goods, although sometimes there are personal hygiene items in the pantries as well. Robinson said  the pantry on North Spring Street may be mistaken for one of the Little Free Libraries that are also located throughout White County.

“The one at Reflections Salon seems to get books or church flyers in it,” Robinson said.

Volunteers have sometimes reported that the wrong items have been found in a pantry when they stop by to stock it, and, while the libraries also serve a much needed purpose, Robinson said the pantries need to be reserved for food.

If an individual would like to volunteer to stock a pantry, Robinson said anyone is free to do so. She would encourage people to stop by and see if the pantries are low on items or simply message the group’s Facebook page to ask about needs.

Fears about the items not being used or spoiling as they wait for families to stop by and retrieve them should be put to rest. According to Robinson, the pantries empty quickly.

“I know the one on Highway 84 empties pretty quick,” Robinson said, and reports have shown that the pantry near the Zile community can empty within a few hours of being filled.

Canned goods are the ideal items to stock the pantries since vegetables and fruits have a shelf life of one to two years and canned meat and poultry can stay at best quality for two to five years. According to a study done by the University of California, while canned fruits and vegetables are often thought of as less nutritious than fresh or frozen products, research revealed this is not necessarily true as food stored in properly sealed cans actually have the same nutritional value as fresh or frozen food.

According to a report on mealtime.org  their research stated that “some canned foods actually yield higher amounts of essential nutrients than their fresh or frozen counterparts as the cooking process concentrates the food.  In addition, in some cases, the heating process used in canning enhances the degree to which some naturally occurring, disease-fighting compounds are absorbed by the body.”

Robinson concluded by saying that if anyone would like to build another Little Free Pantry in White County, they are encouraged to do so.

“Anyone can build one and put it up on their own property if they want, but for them [pantries] to be on someone else’s land, they need to get permission from the property owner before placing it,” Robinson said.

She would also encourage anyone constructing a pantry to contact the network’s Facebook page and have the pantry listed there so volunteers will know where to make donations.