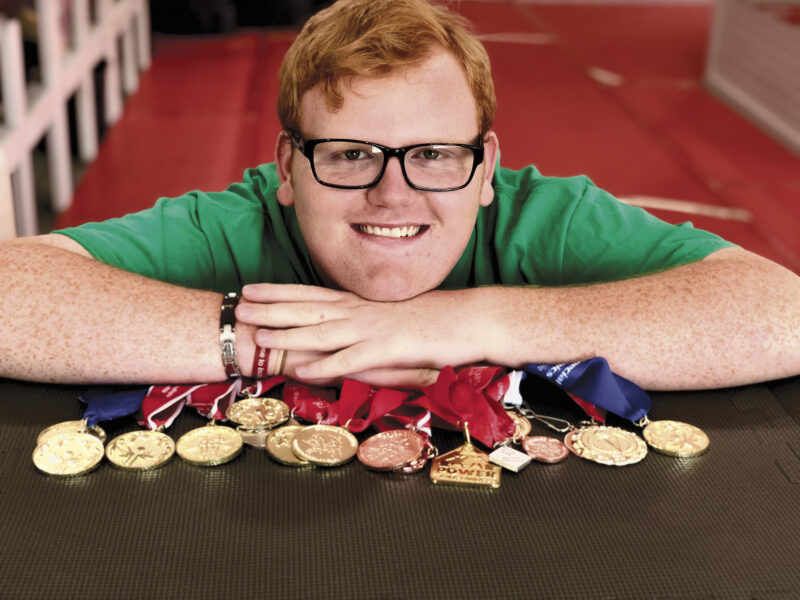 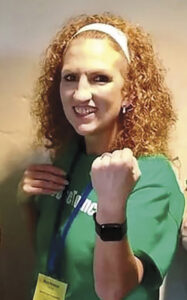 “When you think of someone who should be considered for the ‘Athlete of the Year’ award, you think of someone brave, outgoing, upbeat, and kind. Jordan Casey embodies all of those things,” Coach Callie Marcum said as she described the Special Olympics Tennessee Athlete of the Year who she also says is an influential force at White County High School.

Casey, who moved to Sparta three years ago after his mother tragically passed away, said Special Olympics gave him something positive to look forward to and a place to belong.

“He is a fierce competitor who wants to win,” Marcum said, describing Casey’s ‘on the field persona’ that has led him to win 17 medals, 10 of them gold, in the short amount of time he has been with White County High School. “But he is also as soft and as kind as a Teddy bear. Everyone who knows Jordan loves him, and everyone who doesn’t know Jordan surely wants to meet him.”

“We immediately wrangled him into summer games,” Nancy Benningfield, teacher and coach at White County High School said. “Our state Special Olympics directors met him and asked him to go to California for a Unified Champions Schools conference. The conference really influenced him to come back and implement the program in our school at White County High School. Jordan has led our school in this program, and he is recognized for his contributions in the school community and the state.”

Casey is on the Special Olympics Tennessee youth advisory board, and, according to Benningfield, he is already having an influence with his peers around the state through positive attitude. Casey was a founding member of the WCHS Unified Sports club and has recently been appointed to the state’s Athlete Leaders Committee.

She also stated his teachers and directors at Special Olympics Tennessee have recommended him for a two-year college program at Lipscomb University in which he would work on leadership skills with the hopes of moving on to a career in Special Olympics.

“He was supposed to attend a summer camp at Lipscomb the first of June, but due to COVID-19, the camp was cancelled,” Benningfield said.  “Hopefully, he will still be able to attend after his graduation next year.”

Casey’s teachers have no doubts that he will excel.

“Jordan is one of the most exceptional students I have ever come across in my classroom,” Candice Allen, another one of Casey’s teachers, said. “Jordan is charismatic and loved by all. He is ambitious and always willing to learn and sacrifice for others. He has overcome more than many adults in their lifetime have to face. I am proud of him in so many ways. Jordan deserves the moon and the stars. I’ve learned from Jordan and been inspired by him.”

Casey is excited for his future, but he is even more excited to be able to share the messages of inclusion, leadership, and positivity that he has learned and embraced through his Special Olympics journey.

“After my mom passed away and I moved back to Tennessee, I felt alone,” Casey said. “Special Olympics made me feel like I belong again. I want others to know that, too.”

Casey said he dedicates both his athletic ventures and his leadership aspirations to his mother, saying that she was one of the strongest people he has ever known, and he aspires daily to be sure she would be proud of all he is accomplishing.

“I have witnessed Jordan’s transformation into a young man with his eyes focused constantly on God,” Marcum said about the changes Casey has displayed during his time at White County High School.  “I am so proud of him, and I cannot wait to see what he will accomplish in the years to come.”

“There is hardly a person that has met Jordan that doesn’t walk away without a better attitude and a smile,” Benningfield added.  “It is a joy to be his teacher in his journey of healing and growing up.”

Weston, who works with Sparta’s team a couple of times a week, also plans all of the area’s powerlifting meets as well as supporting and participating in all of the area’s fundraisers. In addition, she was instrumental in securing memberships at the YMCA for the area athletes so they could practice and prepare for competitions. As a crowning moment, Weston and her team attended the Southeast Regional Powerlifting competition, in Georgia, during 2019, winning numerous medals to bring back to the Upper Cumberland Region.

“Coach Nina has selflessly given her time and energy (much of her work coming off the clock) to promote inclusion for all,” Sparta-White County YMCA CEO Kyle Goff said.  “She is devoted to Special Olympics and has demonstrated actions to promote and empower athletes to achieve and persevere. She looks for opportunities for the athletes to shine in the spotlight, finding regional tournaments, gathering sponsors, transporting the kids on her own dime, and making sure that they have a weekend they will never forget. As an advocate for people with intellectual disabilities and an ambassador for the Special Olympics movement, Nina has made a lasting impression on the kids, in her community, and inside the YMCA. Her servant leadership has last a lasting impact on the Special Olympic athletes. She motivates, encourages, empowers, and gives the athletes an avenue of self-expression.”

Weston’s passion for the Special Olympics Program and her athletes is apparent in all she does and is appreciated by the families whose children she inspires.

“Coach Nina Weston has played such an important role in our son’s growth in the past nine months,” Victoria Haston, whose son has many hidden disabilities and medical needs, said.

Haston said her son’s disabilities hinder him from being social, participating in sports, or making friends easily.

“Tears flow down my face when I think of the impact she made in my son’s life,” Haston said. “In the past nine months, she has devoted so much time, energy and love into our Powerlifting team and their families.  I’ve never seen anyone so selfless and dedication to see our children succeed.  She really is one of a kind.”

Haston said her son now looks forward to Powerlifting, seeing his friends, feeling special, and feels like he belongs and that, thanks to Weston, his confidence is blooming.

“I have waited and prayed for this day for many years,” she said. “The first time I realized how special [Weston] was to our family was when our son went to his first Special Olympics Powerlifting competition, in Georgia, a few months ago.  He was able to perform in front of a crowd or walk to get his award was something his dad and I have waited to see his whole life.  It was a very humbling experience, and I’m so grateful I got to experience it. It would not be possible without her.  I’m so thankful our kids have a Coach Nina.“

Weston gives all of the credit back to the athletes, saying they are the ones who deserve the recognition and that they inspire her to be better each day.

“It was an honor and a surprise to be nominated for Special Olympics Tennessee Coach of the Year,” Weston said, as she shared that her athletes make her smile every time they walk into the room. “I dedicate this nomination to my athletes. They are a very talented and special group of youth and adult people.  Area 9 Special Olympics Powerlifting team also works very hard training for competition and always give 100 percent. It is an honor and privilege to be called their coach. Thank you to all individuals involved with the nomination for coach of the year, and this will always be very special to me.”

Weston’s award came not just because of the work she does for her athletes but also for the way she is changing the culture that surrounds individuals with intellectual disabilities and encourages others to join her in supporting and celebrating them.

“Inclusion has become part of the Sparta YMCA’s mission; that is, in large part, because of Nina,”  Goff said. “Through her unwavering commitment to the program, she has injected her passion for Special Olympics into the bloodline of our Y. I encourage everyone to observe her commitment, compassion, and dedication, and you will quickly be inspired to join the cause.”