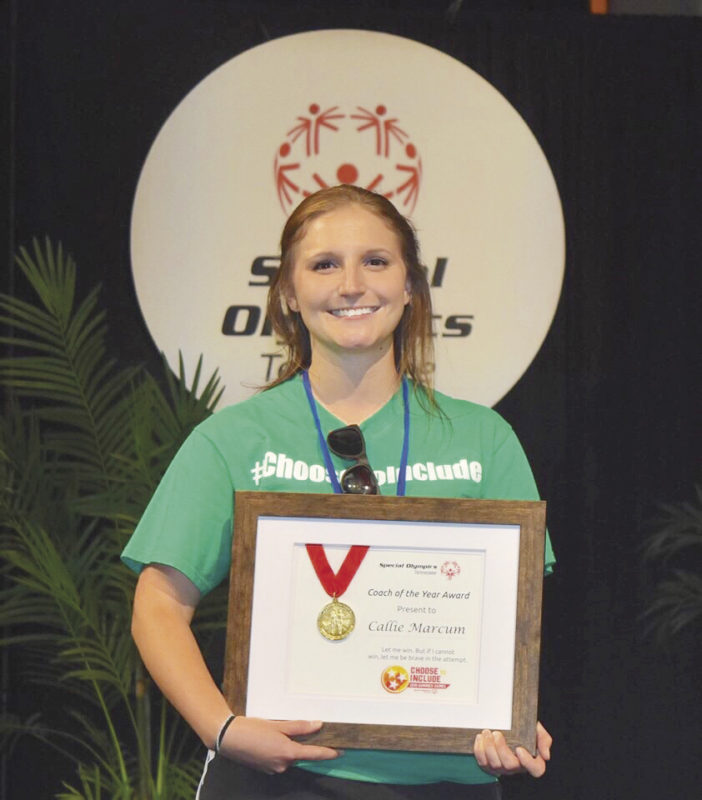 Although it’s been several weeks since Callie Marcum was named Special Olympics Coach of the Year, she is now telling the story of her journey with a program that is close to her heart.

Callie Marcum, who has been White County High School’s liaison in their work to become a Unified Champion School, has been named as the state’s Special Olympics Coach of the Year.

Marcum, who has been coaching the school’s Special Olympics volleyball team since she joined the White County faculty, was nominated for the honor by fellow teacher Jill McCulley. Although through the years Marcum has added basketball, track and field, flag football, snowboarding, ice skating, and tennis to her coaching repertoire, it was her work at ensuring that White County High School was at the forefront of the Unified sport movement that earned her the honor she was awarded for at this year’s Summer Games.

“Unified sports give athletes and their peers opportunities they might not have otherwise,” Marcum said. “Naturally, sports bring people together. By being a Unified Champion School, we can help our athletes build relationships and make friendships that will last a lifetime.”

This past school year saw White County High School become one of the first three schools in the state to be named, officially, as a champion school in which they promote social inclusion through intentionally planned and implemented activities. Champion schools, like White County, ensure that they have climates where students with disabilities feel welcome and are routinely included in, and feel a part of, all activities, opportunities and functions.

According to Marcum, the ultimate goal of the program is to reach outside of the school and into the community. She would like to see the program grow to include persons of all ages in the community and said that there are no age barriers in the Special Olympics programs.

“I would like to see community engagement within our Unified Sports programs,” Marcum said. “I hope people in our community will soon know what our program is about – complete inclusion – and will learn what it means to play and live unified.”

“Words can’t describe how amazing these events are and how inspiring these athletes are,” she said and added that she hopes people in the community will come watch the White County Unified athletes play and compete at one of their events.

Marcum said when she was first presented with the opportunity to work as a coach with Special Olympics, her initial thought was she would be able to help the athletes learn something new.

“That first thought changed right from the beginning,” she claimed. “They teach me. Every single day I am learning more about the world around me, about myself, through these athletes. Where we see challenges in our lives and worry, they simply give their all and overcome challenges we couldn’t even begin to imagine. It makes what we think is important or difficult in our lives seem trivial.”

As for being named “Coach of the Year,” Marcum said it came as a complete surprise.

“I didn’t even know I had been nominated for it,” she said. “We were at the Summer Games and my name was called as a nominee and then later as the winner. I had no idea.”

Her athletes weren’t surprised, however.

“Coach Marcum is awesome,” Jordan Casey, a Unified athlete said. “She coaches for the right reasons: to help us be better people and to teach us to enjoy playing our sport. Winning isn’t what’s important to her. We are.”

“These athletes are truly inspiring, and I was wrong when I thought I could be a blessing to them,” Marcum said.  “They bless me every single day.”