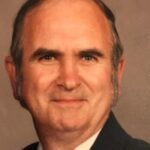 Marvin Welch Saylors Sr., 81, of the Cherry Creek community of White County, passed away Aug. 10, 2019, at his residence.

He was retired from Fleetguard after 33 years.  Mr. Saylors earlier was a welder for the King Corporation for 13 years and enjoyed farming as well.

Mr. Saylors was a member of the Wesley Chapel Methodist Church.

He was preceded in death by his parents and two brothers, Hamp Eugene Saylors (infant) and Sam Saylors.

Funeral service will be 11 a.m., Aug. 13, 2019, at Hunter Funeral Home, with burial in the Nash Cemetery. Thomas Lee Davis and Chris Reagan will officiate, with Larry “Bubba” Johnson providing the music.  The family will receive friends from 5-8 p.m., Aug. 12, at the funeral home.